Childhood Memories Are Erased By Growth of New Neurons 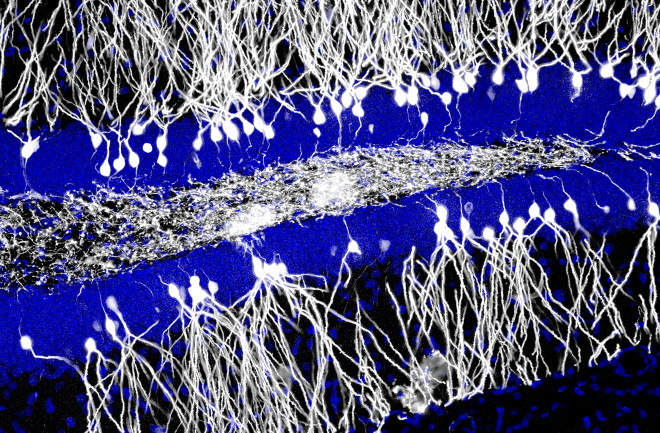 Newly generated neurons (white) integrating into the hippocampus. Credit: Jason Snyder For most of us, early childhood memories resemble videos posted on Vine: brief, random snippets of various times, places and people. But our difficulty recalling our earliest life moments isn’t a result of diminishing brainpower; quite the contrary, it could be the byproduct of our brains’ processes of self-renewal. In a study published this week in the journal Science, researchers show that our brains' continual process of adding new neurons disrupts older memories, making them increasingly foggier or non-existent. Since neural regeneration peaks when we are babies and slows down as we age, this finding might explain why we don’t recall memories from our infancy.

Both humans and mice experience what's called “infantile amnesia,” or forgetting things from the time we were babies, so mice made ideal test subjects. Researchers conditioned adult mice to fear an environment in which they received repeated shocks. They then gave some of those mice access to running wheels, since running has been shown to naturally boost levels of neuron birth, or neurogenesis. When, six weeks later, researchers returned the mice to the environment that they had been trained to fear, they discovered that the exercising mice had added more neurons and had largely forgotten their fear; the sedentary mice, on the other hand, were still traumatized. As another test, researchers gave a group of infant mice drugs to slow their neurogenesis---which is high early in life---and again conditioned them to fear a particular enclosure. When tested a week later, the brain-growth-stunted group were twice as likely to remember their fear as were their untreated littermates.

Making new neurons is crucial to the learning and memory, both in infancy and throughout our lives. These results complicate that picture, however, making neuron birth a trade-off of learning new things while forgetting older ones. Our brains, suggest the authors of a related commentary, are like "palimpsests from the middle ages---manuscripts written on top of older washed-off texts." Something to think on next time you curse your unreliable memory.