Child Behaviour: Not In Their Genes?

A paper just published reports that there are: No Genetic Inﬂuence for Childhood Behavior Problems From DNA Analysis This is pretty big. Using a powerful approach called GCTA, King's College London researchers Maciej Trzaskowski and colleagues found no evidence that genetics can explain differences in children's behavioural and conduct difficulties. First some background. 'Missing heritability' refers to the fact that genetics has mostly failed to find common genetic variants that are associated with 'complex traits' like personality, mental disorer and intelligence. This is surprising because these traits are largely heritable - meaning that they run in families, and that identical twins (with all their DNA in common) tend to be more similar than non-identical ones (with only half). But if they're heritable then, by definition, there must be genes behind that. But with a few minor exceptions, over a decade of studies drew blanks. Hence the heritability is missing in our DNA, unaccounted for. Yet geneticists finally struck gold - or seemed to - with a new technique called genome-wide complex trait analysis (GCTA). Instead of looking at each variant individually, GCTA quantifies how genetically similar any two people are as a whole. GCTA has shown that the more genetically similar people are, the more similar they tend to be in terms of complex traits. Hooray - the missing heritability is... well, it's still missing, but at least we know it's out there, in small pieces scattered across the genome. But this good news only applies to some complex traits, according to Trzaskowski et al. It doesn't hold for child behaviour. In the TEDS sample of British twins, the authors conducted a simultaneous twin and GCTA study. During childhood these twins were assessed for IQ, height, weight, and a range of 'behaviour problems' including symptoms of autism, hyperactivity, psychopathy, conduct disorder and more. The results of the twin study said that all of the traits were moderately heritable (roughly 0.5 on the scale of 0 to 1). But while GCTA confirmed a large genetic influence on the intelligence traits, height and weight, it found no genetic influence on the behaviour measures: 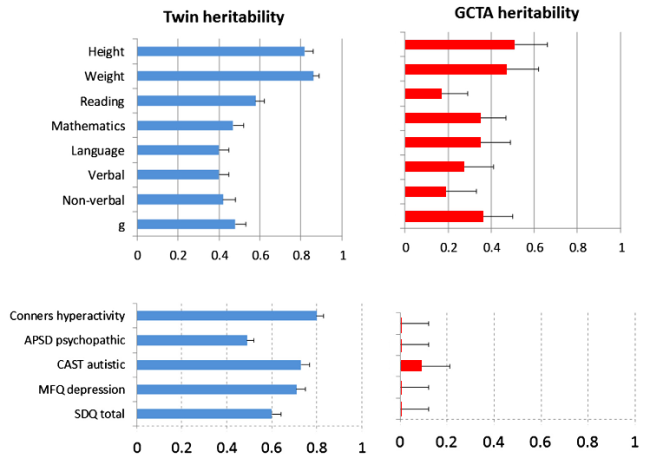 The difference between the two sets of traits is stark. The same picture was seen whether it was parents (shown here), teachers, or the children themselves rating their behavioural symptoms. So, some of the missing heritabilities have been located (if not pinned down), but others are more missing than ever. Trzaskowski call it a "new kind of missing heritability" but I wonder if the name "mystery heritability" is more appropriate in relation to these behavioural problems. What's going on? The authors say that GCTA can only detect additive genetic effects, and can't detect nonlinear interactions between genes. But the trouble is, the twin data just aren't consistent with the idea that nonadditive effects explain any of these traits. However, Trzaskowski then suggest that the results make sense if we assume that twin studies substantially overestimate the heritability of behaviour problems (but not intelligence). This might be because behaviour problems are just questionnaire ratings of traits, which are essentially subjective and prone to bias (e.g. by parents who assume that their identical twins 'must be identical' and rate them as such), while intelligence tests, although not perfect, are less easily fudged. This account does leave room for some genuinely heritability, but only a little.