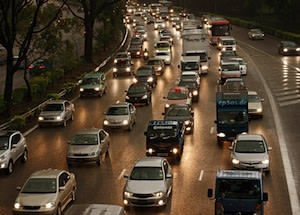 A traffic jam in Singapore

Nobody likes morning commute traffic. Inching along at 5 miles per hour is not only incredibly frustrating, it also yields plenty of pollution. Reducing the cars on road by even just 10 percent during peak times could significantly shrink congestion---but people are unwilling to wake up early or show up to work late just to avoid the peak-traffic time window. Unless, that is, they have some financial incentive. Stanford professor Balaji Prabhakar has instituted traffic-relief programs in India and Singapore, and his latest one, Congestion and Parking Relief Incentives

At its core, the program incentivizes off-peak travel by offering “credits” for people who travel outside of the main commuting time, sort of like a frequent-flyer program. Those credits can then, in turn, be redeemed for a chance to play an online game for cash prizes. So far, Prabhakar and his team have given away S$160,000 ($128,000) in Singapore, and $31,000 at Stanford. In fact, he even teaches a class on the subject: “Incentive Mechanisms for Societal Networks.” So far, the Capri team hasn’t publicly released any specific data on how well the program has worked, but some users have reported a dramatic drop in their own commuting times—as large as dropping from 25 minutes to 7 minutes.

In contrast to existing programs that fine commuters for travelling during peak travel times, Capri’s participants can earn points for travelling during off-peak times and parking in less popular, albeit less convenient, parking lots. These points can be redeemed directly for cash, or for the opportunity to play a game of chance that offers the possibility of even greater winnings. But although Capri’s participants have enjoyed the advantages of shorter commutes and financial rewards, no information about the program’s impact on overall traffic has been announced. We can only hope such a report is coming soon! For more information, check out the article at Ars Technica