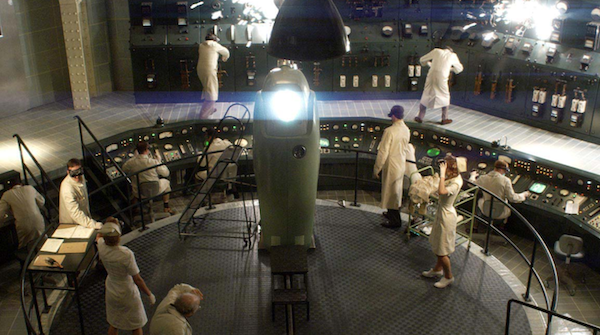 Captain America is not a serious scientific film. Nearly every piece of technology is furious hand-waving. Vibranium? Vita-rays? Rocket-powered propellers? The cosmic cube? Awesome, yes, but not real. These, however, are narrative tools, not attempts at hard scientific prediction and therefore not something to be critiqued. What the comic-book-tech of Captain America allows for is an exploration of the ethics of enhancement. Here, more than perhaps any other fictional film I've seen, Captain America displays striking balance and nuance – it gets enhancement right. Based on your knowledge of the film and/or comics, this post may contain *spoilers*, so consider yourself warned. And if you're looking for review of why it's a fun movie, A.O. Scott in the NYT captures my sentiments about the film perfectly: pulpy Nazi-punching goodness. Now, on to enhancement! There are three major factors that make the enhancement of Steve Rogers and his crimson domed antithesis, the Red Skull, unique among comic book lore. The first is that Steve Rogers was deliberately enhanced by someone. There is no accident, no crisis-as-catalyst-and-crucible event, no mystic charm, and no superhuman heritage to explain or justify Rogers' becoming superhuman. Rogers is superhuman because Dr. Abraham Erskine develops a superhuman serum for that express purpose. Here, the science of enhancement is itself portrayed in a positive light. In what seems like every other superhero origin story, powers are acquired through scientific hubris. Be it the unintended consequences of splitting the atom, tinkering with genetics, or trying to access some heretofore unknown dimension, comic book heroes invariably arise by accident. The super serum, the vita-rays, and the outcome of the experiment on Rogers are all a scientific success. They happen precisely the way every person in the room hopes they will. Dr. Erskine is not a madman but a humble, ethical, and brilliant scientist trying to make better people. As such, he looks for the best in the humans he hopes to enhance. In short, Steve Rogers might be the only major superhero who is the result of scientific experimentation going to plan. Second, Steve Rogers deliberately chooses to become enhanced. I had expressed my doubts about Rogers' consent being genuine, but the film makes his determination and clarity of thought evident. Unlike many heroes, who seem to acquire their powers out of recklessness around science (Banner, Parker, Richards, I'm looking at you), Rogers very consciously decides to go through with Dr. Erskine's procedure. He, in fact, might be one of the only heroes who ever knew he was going to be come a hero before his transformative event. That foreknowledge is critical for demonstrating that enhancement isn't something that is only desired by egomaniacs. Rogers seeks strength and speed to defend and protect others. His body did not match how he saw his true self. Again, we see an anti-science motif of comic books turned on its head. Normally, those who seek superpowers are unworthy because they believe they deserve to be better than others, thus, the experiments go wrong. This attitude is embodied in the Red Skull, whose evil quite literally boils to the surface when he injects the super serum. However, Rogers' reasoning is that others deserve to be protected and defended. Altruism, not egoism, is the driving force behind Rogers' desire to become enhanced. Third, and most important, is that enhancement in the film is not merely "functional" enhancement. That is, Rogers is not just stronger and faster. In a private moment, Dr. Erskine explains to Rogers that the serum and vita-rays affect "everything that is inside. Good becomes great. Bad becomes worse." Erskine is not talking about physical traits here. Rogers' "bad" traits (i.e. his laundry list of medical issues) are not aggravated by the serum, but cured. The good/bad that becomes great/worse are moral qualities and capacities of the person. Captain America is literally super-moral. His already above-average sense of moral clarity and determination to do what is right becomes amplified in the same way that the lust for power and pleasure from slaughter are magnified in the Red Skull. Moral enhancement, a fairly recent talking point among thinkers in the bioethics community, is handled deftly in Captain America. Enhancements do not change who we are or from where we come, but serve to empower and improve traits which we already possess. For Steve Rogers, those traits are what we wish for most in our heroes: beneficence, altruism, and humility. Note, among his list of valued traits are not unwavering loyalty to national authority (despite his irritating flag fetish) or deference to some commanding power. Instead, Rogers' own judgment causes him to defy orders at almost every turn. Why? Because Captain America's sense of ethics is itself enhanced. He is a better human being because of Dr. Erskine's process. I haven't seen a movie that was this pro-science and pro-human goodness in a long time. I may not have seen a movie that was this pro-enhancement ever. Did I mention it also involves Nazi-punching? Follow Kyle on his personal blog, Pop Bioethics, and on facebook and twitter.