Can We Grasp The Brain's Complexity?

An entertaining paper just out in Frontiers in Systems Neuroscience offers a panoramic view of the whole of neuroscience: Enlarging the scope: grasping brain complexity The paper is remarkable not just for its content but also for its style. Some examples:

How does the brain work? This nagging question is an habitué from the top ten lists of enduring problems in Science’s grand challenges. Grasp this paradox: how is one human brain - a chef d’oeuvre of complexity honed by Nature - ever to reach such a feast as to understand itself? Where one brain may fail at this notorious philosophical riddle, may be a strong and diversely-skilled army of brains may come closer.

It remains an uneasy feeling that so much of Brain Science is built upon the foundation of a pair of neurons, outside the context of their networks, and with two open-ended areas of darkness at either of their extremities that must be thought of as the entire remainder of the organism’s brain (and body).

As humans tend to agree, increased size makes up for smarter brains (disclosure: both authors are human)

I love it. I'm not sure I understand it, though. The authors, Tognoli and Kelso, begin by framing a fundamental tension between directed information transfer and neural synchrony, pointing out that neurons firing perfectly in synch with each other could not transfer information between themselves. They say that the 'transfer' model originated in the physiology of the synapse, while the 'synchrony' model grew out of electrophysiology - and both are valid at different scales. But how are we to reconcile them? How can information flow through a brain where everything is locked in synch? Here's how they depict the issue: 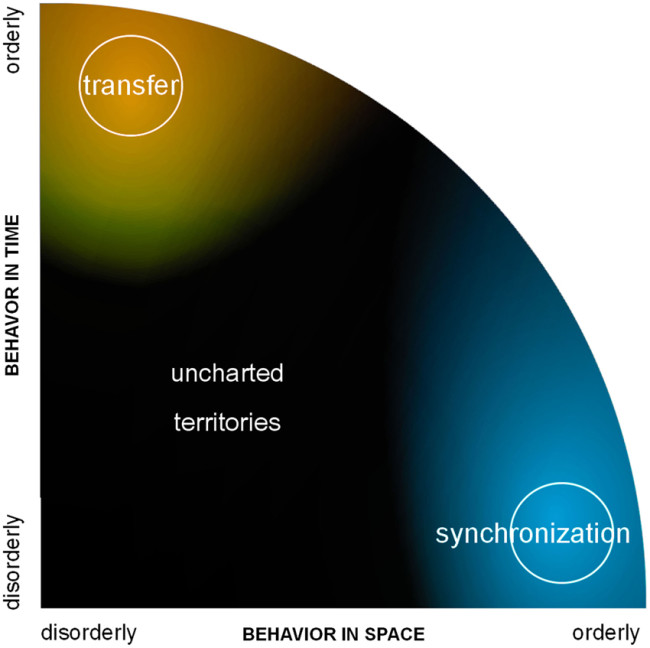 What's in the big black uncharted zone? It's a great question, and Tognoli and Kelso frame it very well. However, I'm not sure if they answer it. In a rather abstract way, they point to the notion of metastability as the master key to unlocking the brain, saying that

A new paradigm would help to integrate principles that seem contradictory in their radical form: transfer and synchronization, as well as integration and segregation. Those pairs of concepts are reconciled under the dynamical regime of metastability... Under a metastable regime, information is continuously created, preserved and annihilated by spatiotemporally changing coalitions among parts and processes. This is a source of dynamic complexity, and the likely origin of the human brain’s many prowesses.

OK. But it would be nice to see some examples of metastability in neuroscience, yet none are detailed. Then again, the paper does include references to the authors' previous papers on this topic, such as this one. Perhaps there is more to be found there.