A paper makes the remarkable claim that autism could be detected through the use of ultrasound to peer beneath the skull. This paper is from 2014, but it just came to my attention. The authors of the piece, James Jeffrey Bradstreet, Stefania Pacini and Marco Ruggiero, studied 23 children with autism and 15 control children, who were unaffected siblings of the autistic group. Using ultrasound, the authors looked under the skull overlaying the brain's temporal cortex. The ultrasound revealed what lay beneath, including the meninges, the membranes that surround the brain, as well as the cortex itself: 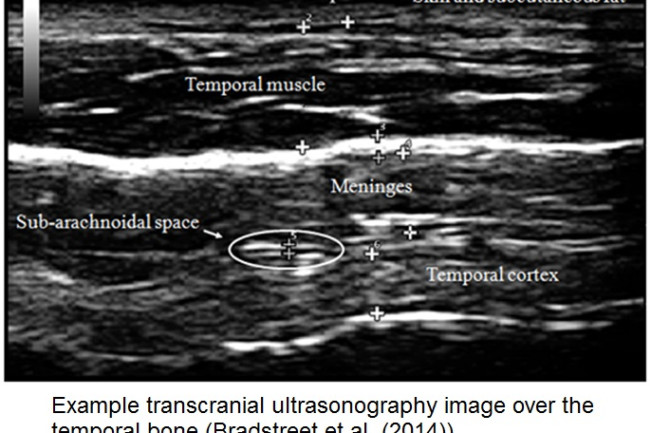 Bradstreet et al. report finding two kinds of abnormalities in the children with autism. Firstly, there was an increased thickness of extra-axial fluid (EAF), a fluid-filled space between the arachnoid mater and the pia mater, two of the meninges. Secondly, there was cortical dysplasia - structural abnormalities in the cortex itself - namely "hypoechoic lesions within the substance of the cortex, or disturbed layering within the gray matter." The authors rated these abnormalities on a 4-point scale, with 1 being no visible abnormality and 4 being severely affected. 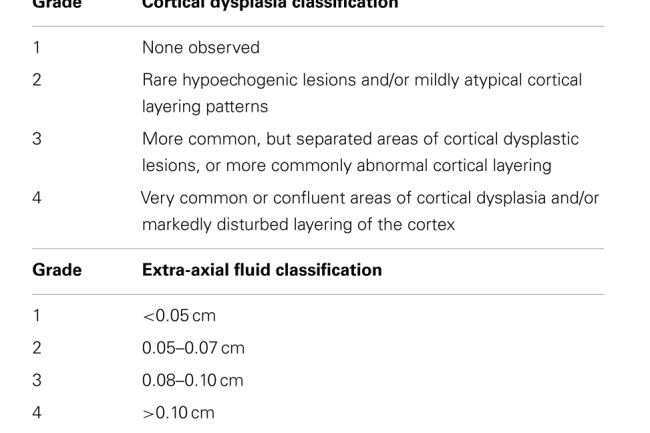 According to Bradstreet et al., there were dramatic differences between the autism and control groups in terms of the prevalence of both EAF and cortical abnormalities. For EAF, all of the control group were rated normal, 1 point, while all of the autism group scored 2 or higher. For cortical dysplasia, all the control group scored 1, and all but one of the autism group (22 out of 23) scored 2+. It's worth taking a moment to appreciate how remarkable these results are. Using ultrasound, Bradstreet et al. are claiming to have found markers which are pretty much 100% predictive of the presence of autism. Compare this to the situation with structural MRI scanning: Haar et al. found that the very best methods achieved no more than 60% accuracy at predicting ASD (where 50% is chance performance) based on brain structure. So either ultrasound is much better than MRI for detecting ASD, or something's gone wrong here. What might have gone wrong? In Bradstreet et al.'s study, the abnormalities were rated manually by someone who reviewed the ultrasound images. It is not stated that this person was blind to the group (autism or control) of the subjects in question. If the rater wasn't blinded, the ratings might have been influenced (consciously or subconsciously) by the rater's expectation of finding abnormalities in the autism group. A related concern is that no data is provided about the reliability of the EAF and cortical dysplasia ratings. Reliability means the extent to which two raters (or the same rater at two different times) assigns the same rating to the same subject. Establishing the reliability of a novel measure is considered crucial before it can be deployed to examine group differences. Neither the blinding nor the reliability issue are addressed anywhere in the paper. I'm surprised that this paper passed peer review. Finally, it may be relevant that the authors of this paper have 'interesting' track records. Marco Ruggiero has published papers arguing that HIV does not cause AIDS. Stefania Pacini, along with Ruggiero, has promoted the controversial cancer therapy GcMAF and Jeff Bradstreet had (before his death last year) a long history of 'treating' autism with a variety of unconventional therapies, including GcMAF. Hat Tip: herr doctor bimler on Jeffrey Beall's blog.