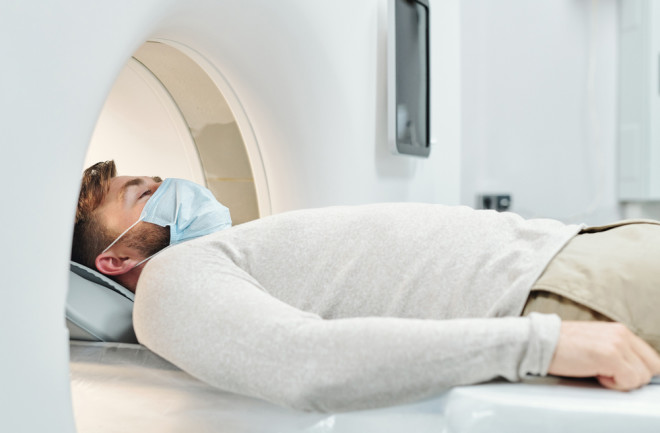 Even though depression is the leading cause of disability worldwide, the vast majority of people suffering from this mental illness don’t have access to therapies that are effective, fast-acting and long-lasting. Luckily, new individually tailored treatments that stimulate the brain with painless magnetic pulses look promising for alleviating depression.

One of these approaches, called Stanford neuromodulation therapy (SNT, pronounced “saint”), appears particularly effective. A study published in February 2022 in the American Journal of Psychiatry states that 78 percent of 29 participants in an SNT trial at Stanford University went into remission after just five days of treatment. Half the participants still felt better four weeks post-treatment, and the only side effects were a slight headache or fatigue.

“It's very appealing in the sense that it's a relatively non-invasive treatment that could prove beneficial for some people who don't respond to medications or talk therapy,” says Jonathan Alpert, Chair of the American Psychiatric Association’s Council on Research.

Widely prescribed antidepressants like Prozac or Zoloft — which attempt to balance the levels of chemical messengers in the brain — can take weeks or even months to relieve symptoms, and come with a litany of undesirable side effects. Plus, these pills don’t work for many patients.

“Around 30 percent of people continue to be significantly depressed even after multiple treatments of traditional antidepressants,” says Alpert, who is also chair of the Department of Psychiatry and Behavioral Sciences at Montefiore Medical Center and Albert Einstein College of Medicine.

According to Alpert, people who suffer from depression may have altered interactions within and between two areas of the brain: the left dorsolateral prefrontal cortex and the anterior cingulate cortex. Neuromodulation techniques like SNT can reboot ailing neural connections.

Upping and Accelerating the Magnetic Dose

Eight years ago, Nolan Williams, Director of the Brain Stimulation Laboratory at Stanford University Medical Center and senior author of the recent study began researching ways to improve transcranial magnetic stimulation (TMS). This treatment, which involves placing a magnetic coil against the scalp, was approved by the FDA in 2008 to treat depression.

“We took the same 90,000 magnetic pulses used in conventional TMS and reorganized them in space, time and dose,” says Williams. “It yielded a big uptick in efficiency, and we were able to get some people well in a single day or a few days.”

Instead of 36 sessions spread out over six weeks, SNT administers 50 sessions over five consecutive days. SNT also uses a specific magnetic frequency called Theta burst and triples the dose from 600 to 1,800 pulses per session.

Another notable difference is that SNT uses a functional MRI to individually target the magnetic pulses to the specific parts of each patient’s brain affected by mental illness. "We've come up with a way of using machine learning to map each person’s brain and isolate the ideal spot for treatment within their personalized neuroanatomy,” says Williams.

Williams points out that when TMS was first developed 40 years ago, treatment approaches were limited by the technology of the time. Nor were they based on mammalian physiology. Recent breakthroughs in neurobiology research paired with technological advances have made it possible to better pinpoint the parts of the brain that might be repaired with magnetic stimulation.

Brain maps use a technique called resting-state functional MRI, which measures spontaneous fluctuations in brain activity. “Rather than comparing one brain to another, we compare the brain to itself to map which regions fluctuate together,” explains Siddiqi. “Then we can estimate where the brain might not be working correctly.”

The functional MRI provides 150 million data points for each brain. This can create a “data science challenge,” says Siddiqi, as the scans require specialized computer models and expertise to decipher. However, Siddiqi believes this technology will soon become more readily available to medical professionals.

Alpert agrees that getting a functional MRI is currently a “logistical problem” facing widespread application of individualized neurostimulation treatments like SNT since few clinical settings are equipped with the technology. The second hurdle, says Alpert, is that mental health patients “need to block off an entire week for treatment,” which might not be feasible, especially as it seems likely many people would require repeat treatments a few times per year.

Who Benefits From Which Depression Treatment?

On the whole, Alpert is encouraged by the many new options on the horizon for treating depression, including magnetic stimulation, neuroactive steroids, ketamine and psychedelic medicines like psilocybin and MDMA. All of these emerging interventions “seem to work pretty quickly,” he says, using different mechanisms to heal the brain than clinicians have used in the past.

However, since each person responds differently to each type of treatment, Alpert says “the Holy Grail in our field remains how to predict who does best on which treatment."

Researchers are investigating how different biomarkers might help clinicians pair patients quickly with the treatment most likely to succeed. For instance, a doctor might someday use a specific blood test, genetics test, MRI or EEG to determine whether an individual would best respond to TMS, ketamine, Prozac or psilocybin.

As for SNT, larger NIH-funded clinical trials are currently underway as FDA considers approving this new treatment for depression. “Who is this for? How long does it last? Those are open questions that still need to be answered,” says Williams.

Although there are currently no commercially available personalized neurostimulation systems in the U.S. that can treat patients with SNT, Williams hopes that one day these systems (TMS coils along with functional MRI machines) will be available at every psychiatric hospital or emergency room to treat depression and prevent suicide.

“I think all these new technologies and medications need to be fully explored and given as options to patients. Some might want psychedelics while some might want TMS,” says Williams. “The most important part is making sure they can easily access more of whatever makes them better, so they aren’t at risk again in the future."