Can Neuroscience Teach Us About Winemaking?

Modern winemakers may have erred when they switched to producing high alcohol wines. According to a new paper, from Spanish neuroscientists Ram Frost and colleagues, a low alcohol content wine actually produces more brain activity in 'taste processing' areas than more alcoholic varieties do. But what does the brain really have to say about Beaujolais? Can scanning help us pick a Sauvignon? Will neuroimaging reveal the secret to a good... er... Nero d'Avola? 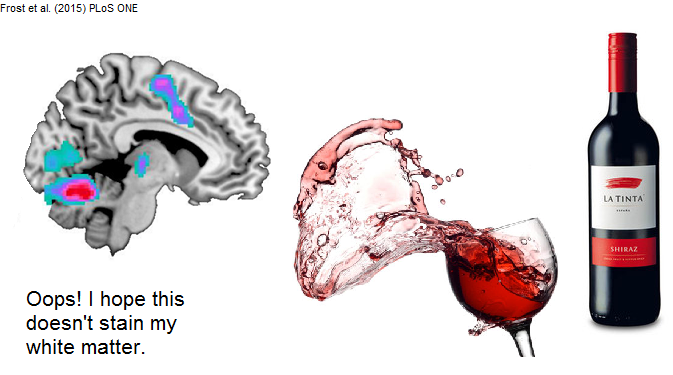 In their paper, published in PLoS ONE, Frost et al. note that alcohol levels in wines have risen lately: "Whereas 30 years ago levels of alcohol of 12% or 12.5% were common, today’s bottles on the shelves commonly display levels of 14%, 14.5% or even 15%." Why? Because winemakers "seem to... assume that strong wines are, on the average, more appreciated by wine consumers." Frost et al. say that high alcohol wines are seen as being 'powerful', 'intense' and 'full-bodied' and that this is considered desirable. But are strong wines really better? To find out, Frost et al. used fMRI to measure brain activity from 21 occasional-wine-drinking volunteers. During the scan, participants tasted samples of different wines (all red) via a tube in their mouth. In each scanning session there were two wines, one low alcohol and another high alcohol, the two being selected to be similar in all respects except alcohol content. Unexpectedly, the data showed stronger brain activity to low alcohol wines compared to high alcohol ones, in the right insula and in the right cerebellum. Frost et al. say that these areas are known to be sensitive to taste intensity perception. So, contrary to the popular belief that strong wines are strong tasting, "these wines induce weaker activation relative to the low-alcohol content ones." There were no parts of the brain where the strong wines caused more activity. How can that be, given that the strong and weak wines were chosen to be matched on flavour? Frost et al. say that the greater brain activation to low alcohol wines means, not that they contain more flavour, but that people tend to pay more attention to the flavor when the alcohol content is low: they hypothesize that "the low-alcohol content wines induced a greater attentional orienting and exploration of the sensory attributes of wines relatively to high-alcohol content wines." The authors conclude that their fMRI data fit with what many winemakers and critics have always said:

The main criticisms of this "New World" (high alcohol) approach to winemaking are that these wines often lack finesse, and also that the high-alcoholic content overshadows the subtle flavours and aromas that the wine could exude. Our findings seem to support this view... that such lower alcohol content wines have a better chance to induce greater sensitivity to the overall flavour expressed by the wine.

The controversy over the alcohol content of wine (especially red wine) has been raging for years. Broadly speaking it pits "brash, bold", high alcohol New World wines from Australia, California, etc. against "elegant, authentic" Old World varieties from places like France and Spain. Hmm. One American wine critic recently blasted the partisans of low-alcohol as "Eurocentric, self-proclaimed purists." So has neuroscience proven the purists right? Being someone who hates all red wine, I'm perhaps not really qualified to comment, but as a neuroscientist, I will say that Frost et al.'s approach does seem valid if we accept that activity in the right insula and cerebellum represents subjective perception of flavour intensity (and nothing else); Frost et al. didn't test that hypothesis, they rely on citing other papers. Also, it's not clear whether an brain scan is the best way to approach the question of whether high alcohol is overpowering. Surely the same thing could be demonstrated using a taste test, albeit it might require a carefully worded set of questions. But it would be a lot cheaper than 21 fMRI scans. As for myself, I'll stick to white wine, or even better, beer. Forget red wine, I'll have a Chimay Rouge.