Can Monkeys Get Depressed?

According to a new study from Chinese neuroscientists Fan Xu and colleagues, some monkeys can experience depression in a similar way to humans. The researchers studied cynomolgus monkeys, also known as crab-eating macaques (Macaca fascicularis), a species native to Southeast Asia. Cynomolgus monkeys are highly social animals. Xu et al. previously showed that isolating a monkey from its companions caused it to develop depression-like behaviors. In their new paper, the authors say that they've noticed that some monkeys seem to become depressed naturally, without any human intervention. They observed the monkeys in a large primate breeding facility in Suzhou, China:

From April to November 2010, by means of a scanning method on a total population of 1007 adult female cynomolgus monkeys across all 52 enclosures, we identified subjects displaying depressive behavior using the following operational definition: slumped or collapsed body posture, diminished interest in feeding and sex, and diminished communication and reciprocal grooming with others. In total, 50 subjects met these criteria.

Here's Xu et al.'s illustration of the slouched posture of two "depressed" monkeys as compared to a happy one 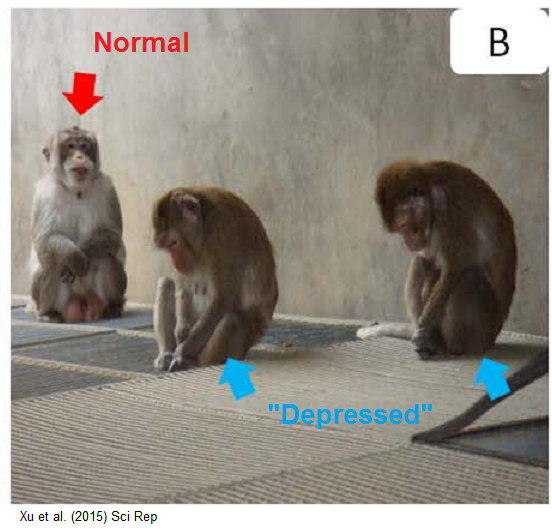 Some of the descriptions of the behavior of the pessimistic primates are rather poignant:

Xu et al. argue that the melancholy macaques represent a close analog of human depression because

Hmm. The analogy between modern society and a monkey enclosure does have a certain face validity. But who are we to say whether these monkeys are suffering from "depression" (pathological) as opposed to "sadness" (normal emotional response)? This is a notoriously difficult distinction to draw in humans, let alone in monkeys! While these animals certainly appear to be miserable, maybe they are just a model for human misery, not human mental illness.