Can Electricity Stimulate Your Brain To Work Faster?

A widely-used 'brain stimulation' tool has no effect on the speed of the brain's responses, according to a new study from Australian neuroscientists Jared Horvath et al. The technique of transcranial Direct Current Stimulation (tDCS) involves attaching electrodes to the scalp and applying a weak electrical current. This current is thought to flow through the brain and alter neural activity in areas close to the electrodes. tDCS is a popular experimental method in neuroscience, and there's also a DIY tDCS community who use the technique at home. It even has its own subreddit. But does tDCS work and, if so, what does it do? One of the main claims in the literature is that stimulation over the motor cortex can affect the excitability of the brain's motor pathways and thus influence reaction times. Yet the evidence is mixed: some studies have found effects of tDCS on motor reaction time, while others showed none. Horvath et al. say that one possible explanation for the messy literature is methodological variability. Previous studies have used different stimulation intensities, electrode locations, and other tDCS parameters. So, in order to find out which (if any) tDCS protocols affect response speed, Horvath et al. recruited 150 healthy volunteers and had them perform a simple reaction time task under different tDCS conditions. One stimulation electrode was always placed over the primary motor cortex (M1), but the location of the other, reference electrode varied, as did the current intensity and polarity. Some volunteers got 'sham' tDCS in which the current was turned off. The various conditions are summarized in this image: 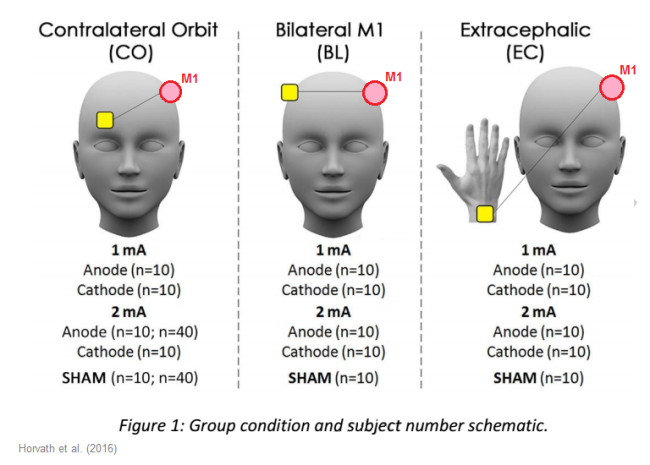 It turned out that there were no significant effects of stimulation on reaction time, compared to the sham controls, in any of the twelve tDCS conditions. It's worth noting that the group sizes in these comparisons were pretty small, because the participants were split across so many conditions. However, no effects were seen either when the data were pooled across electrode locations, tripling the sample sizes. The stimulation set-up that seemed closest to giving an effect on reaction time was '2 mA, anodal, contralateral orbit reference'. However, Horvath et al. went on to run a replication study just looking at this variant, with an additional 80 volunteers, and found no effect. The authors conclude that:

In this study, we set out to determine if and how the unique tDCS parameters of current density, electrode montage, and stimulation-to-task relationship affected simple motor reaction time. Regardless of how these parameters were varied and combined, we were unable to find a significant impact of tDCS.

This paper will add to Horvath and colleagues' reputation as tDCS-skeptics. Recently, they've published not one but two meta-analyses (1, 2) that found no effects of tDCS on various outcomes. In this paper however, they are fairly cautious in their conclusions. Rather than saying that tDCS "doesn't work", they say that:

That we were unable to find a significant impact of tDCS over M1 on simple motor reaction time raises interesting questions concerning the mechanisms by which this tool might modulate higher-order motor behaviors. More specifically, our results suggest that an increase in motor activation speed might not be a mechanistic foundation for the modulation of larger, more cognitively demanding motor behaviors.