A paper just published in Science has given rise to some astonishing headlines:

But is the media's excitement justified, or are they barking up the wrong tree? Here's the paper, from Hungarian neuroscientists Atilla Andics and colleagues. It was a canine fMRI study: dogs were trained to lie still in the MRI scanner and were played voice recordings of a female dog-trainer who had worked with all of the dogs. There were four kinds of stimuli: sometimes, the voice said a word of praise, in a positive tone of voice ("Pp"). Other stimuli included a praise word in a neutral tone ("Pn"), a neutral word in a positive tone ("Np"), and a neutral word in a neutral tone ("Nn"). The purpose of these different stimuli was to determine whether the dogs' brains responded to the lexical aspects of the voice - i.e. which word was said - or only to the tone. According to the authors, the results show that dogs do show selective neural responses to lexically meaningful words (praise words): "Cortical responses for lexically marked (Pp and Pn) but not unmarked (Np and Nn) words were left hemisphere-lateralized". In humans, language processing is lateralized to the left hemisphere in most people, so this is rather interesting. Here's the key result, showing that left-lateralization was higher for the praise words (p<0.01) 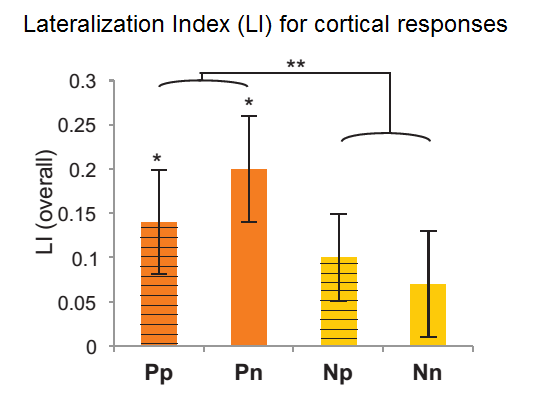 The authors interpret this result as showing that "dog brains maintain intonation-independent lexical representations of meaning" - i.e., that when you praise a dog and say "Good boy!", the dog doesn't just appreciate the positive tone of your voice, but also learns something about the positive nature of the words "good boy". But this doesn't strike me as entirely logical. It seems a stretch to say that dogs are processing the meaning of the praise words, just because the neural activity is more lateralized than for random neutral words. We really don't know what's going on in that left hemisphere. It remains to be seen whether these left-lateralized neural responses relate to the dog's behaviour or mental processes. Another issue is that the dogs are probably just more familiar with the praise words. The authors acknowledge this but say "Lateralization for Pp could also be related to its higher frequency in dog-directed speech, but Pn, though rare, elicits a similar left hemisphere bias"; however while it's true that dogs rarely hear praise words said in a neutral tone, that doesn't change the fact that they do hear those words frequently. Further analysis revealed that the dogs showed activation in the brain's reward system, but only to Pp stimuli, i.e. to praise words said in a positive tone, which Andics et al. summarize as "dogs relied on both word meaning and intonation when processing the reward value of verbal utterances.", but again, I'm not convinced that the dogs need to know anything about the meaning of the words to show a positive response to them (it might be a matter of conditioning.) The authors conclude that their results "reveal functional analogies between dog and human brain mechanisms". In my view, this is an interesting study but these are preliminary results that raise more questions than they answer. In writing this post I heard from Greg Berns, another dog fMRI researcher. Berns, who acknowledges he is "a competitor in this field", agrees that dogs respond positively to praise (indeed he has his own study showing that dogs' reward systems often prefer praise to food!) but he's critical of Andics et al.'s interpretations:

Dogs are known to have side preferences, and this could easily explain the Hungarian results. Without testing individual dogs for an independent measure of hemispheric dominance, we have no way of knowing whether the observation is due to “lexical” processing, or simply because a dog has a tendency to have higher activation on one side of the brain. This could be especially true if they associate the praise with some type of action (Paul Bloom wrote about this a decade ago in regards to Rico, the border collie). We see lateralization all the time in our dog studies, as well as human studies, but we don’t usually ascribe any functional significance to it. Even if the hemispheric bias was real, we can’t tell whether it was because of lexical processing or because the words that were flagged as having meaning were praise words. Human imaging studies have long shown that the left hemisphere tends to be more active to positive emotions. This could explain the Hungarian results, without invoking lexical processing...

In their 2014 paper, the same group reported a similar experiment comparing dogs' fmri responses to dog vocalizations, human vocalizations, and non-vocal sounds. The left auditory region was significantly more active to the dog vocalizations than the other two. Unless there is a secret dog lexicon, this all points to an attention-amplifying effect of left hemisphere bias of auditory processing. Still interesting, but not lexical processing. It is important to be clear about the difference, especially to the vast dog-owning public.

The media spin on the latest would have you believe that dogs understand what we say to them. I'm convinced dogs understand some things, but their semantic space is not constructed like ours.