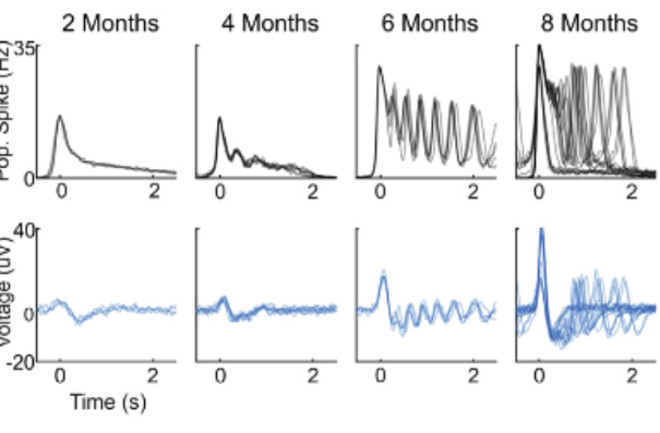 A paper about electrical activity in cultured human brain cells got a lot of attention this week:

The study, published in Cell Stem Cell, was about cortical organoids, three dimensional blobs of brain-like tissue that are created from induced pluripotent stem cells (iPSCs).

Researchers Trujillo et al. recorded electrical activity from the organoids as they grew and matured. The key finding was that by 2 months of age, organoids began to show spontaneous ‘network events’, or coordinated firing of many neurons. These events occured approximately once every 20 seconds.

As the organoids aged, the network events became more complex, consisting of a series of multiple peaks. By 6 months, many events contained several cycles of activity, with a frequency of 2-3 Hz. This is the same frequency range as the delta waves seen in mature brains during deep sleep.

Trujillo et al. point out that the organoids’ developing pattern of activity resembles the brain activity (EEG) of premature babies in certain respects:

To really underline this point, Trujillo et al. trained a machine learning algorithm to estimate the age of premature babies based on their EEG. When the algorithm was given the organoid recordings, it turned out to be able to accurately estimate their age as well, despite never being trained on organoids. This suggests that the developmental trajectory of the organoids was indeed similar to that of real humans.

Overall, this is an interesting and striking paper, but I wouldn’t rush to draw any strong conclusions. The fact that organoids show bursts of activity similar to those of the developing human brain doesn’t mean that the organoids share other brain-like properties.

In particular, the existence of these network events in organoids doesn’t mean that the organoids are ‘thinking’. Remember that delta waves, the adult EEG features most similar to the network events, are seen in sleep or unconsciousness.

If I had to guess at an interpretation of these results, I’d say that the emergence of delta waves reflects the maturation of the organoids and that if allowed to grow for long enough, an organoid would enter a state of constant delta activity. The real human brain has brain pathways to wake the cortex up; an organoid (as currently constructed) doesn’t have these, so it would be forever asleep, although adding the right neurotransmitters to the organoid’s fluid might be able to awaken it…