A man developed a passionate love for the music of Johnny Cash after being implanted with a brain stimulation device. The unique story is told in a case report in the Frontiers in Behavioral Neuroscience journal, published on the 6th May. 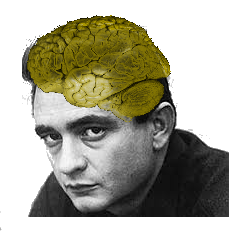 The authors, Mariska Mantione and colleagues, describe the case of "Mr. B", a 58 year old Dutch man who had suffered from severe obsessive-compulsive disorder (OCD) and anxiety since the age of 13. Numerous medications and psychotherapy had failed to provide relief. So Mr B. was given deep brain stimulation (DBS) as a last resort treatment. The electrodes were placed in the nucleus accumbens. It worked: his OCD and anxiety symptoms went down, down, down, so much so that he felt like his spirit was finally unchained:

Mr. B. reported he felt very confident, calm and assertive and he started to call himself “Mr. B. II”, the new and improved version of himself.

But it wasn't just his symptoms that changed; his musical taste did too. Previously Mr B had been quite fond of the Rolling Stones, but he wasn't really a big music lover. However,

His appreciation for the Man in Black soon progressed from liking into devotion. Mr. B kept Cash on his mind both day and night

Mr. B. reported that he felt good following treatment with DBS and that the songs of Johnny Cash made him feel even better. From this moment on, Mr. B. kept listening simply and solely to Johnny Cash and bought all his CD’s and DVD’s... From the first time Mr. B. heard a Johnny Cash song, [all other music] has been banned.

However, this remarkable Cash-omania apparently vanished on occasions when the DBS stimulation turned off:

His former musical taste reoccurred immediately when stimulation was interrupted due to battery depletion, suggesting a direct causal link between musical preference and stimulation of the accumbens.

What does this mean? It's a fascinating case, but hard to make sense of. The most direct interpretation would be that stimulation of the accumbens directly made Mr B more receptive to enjoying and becoming a fan of music. The accumbens is involved in pleasure and motivation so this is plausible, but it begs the question, why Johnny Cash rather than any other musician? Can the specific object of Mr B's new preference be explained, or is it just one of those inexplicable quirks of human life? Then again, who's to say that the nucleus accumbens stimulation was directly responsible for the Cash preference? Perhaps it was the sense of a new perspective on life, secondary to his symptom improvement, that was crucial. Maybe any effective OCD treatment would have had the same consequence? Against this possibility, Mantione and colleagues note that the preference seemed to be contingent on the continuing accumbens stimulation, but this is essentially an anecdote, not a rigorous blinded discontinuation trial.