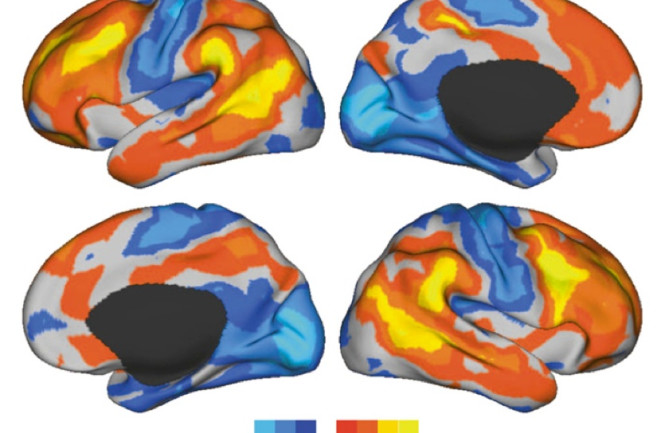 Brain differences between the 23 participants were quantified at each surface vertex. Values below the global mean are shown in cool colors while values above this average are shown in warm colors. Image courtesy ofSophia Mueller et al. Every person thinks and acts a little differently than the other 7 billion on the planet. Scientists now say that variations in brain connections account for much of this individuality, and they've narrowed it down to a few specific regions of the brain. This might help us better understand the evolution of the human brain as well as its development in individuals. Each human brain has a unique connectome---the network of neural pathways that tie all of its parts together. Like a fingerprint, every person's connectome is unique. To find out where these individual connectomes differed the most, researchers used an MRI scanning technique to take cross-sectional pictures of 23 people's brains at rest. Researchers found very little variation in the areas of the participants' brains responsible for basic senses and motor skills. It's a pretty straight shot from the finger to the part of the brain that registers touch, for example, or from the eye to the vision center. Thus we apparently all sense the world in more or less the same way. The real variety arose in the parts of the brain associated with personality, like the frontoparietal lobe. This multipurpose area in the brain curates sensory data into complex thoughts, feelings or actions and allows us to interpret the things we sense (i.e., we recognize a red, round object as an apple). Because there are many ways to get from sensation to reaction, and many different ways to react to what we sense, each individual's brain blazes its own paths. Genes and environment both contribute, but environment is especially powerful in development of the frontoparietal lobe (more so than other brain areas). Thus, the complex areas of our brains are more plastic than the rest, allowing our environment to play a larger role in shaping our personalities. The areas of the brain that showed the most variation between individuals were also the ones most recently subjected to evolutionary pressures, according to the study published Wednesday in Neuron. Human and monkey brains are most divergent at these same brain locales that have the most interpersonal differences. That makes sense since these are also the areas responsible for high-level cognitive functions like language and reasoning. So, if human evolution continues in the same direction, it means our individual brains will become even more unique.