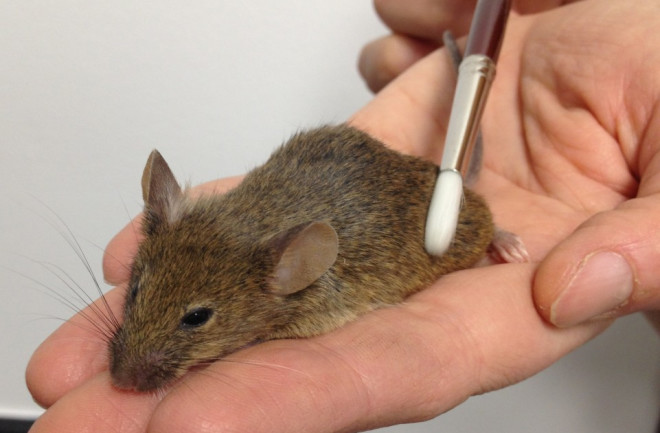 The research team was able to identify in mice a specific class of skin sensory neurons that responds to massage–like stroking of the skin. Data were obtained by in-vivo imaging of the specific neurons in the spinal cord while the mice were stroked with a paintbrush. Image courtesy of D. Anderson lab, Caltech Petting feels good. You can see it in a cat's slowly closing eyes or the contented panting of a dog getting his belly rubbed. In fact, all mammals enjoy being caressed, including humans. Researchers looked at this phenomenon in lab mice and found that stroking stimulates a very specific set of neurons that have to do with hair. Some sensory neurons are relatively non-discriminatory. They respond to touch, temperature and pretty much anything that comes into contact with the skin. A few years back, researchers identified a rare type of neuron called MRGPRB4+, which is linked specifically to hair follicles. In lab tests on a patch of mouse skin, these neurons didn't respond to a single stimulus. But with live mice the researchers got much more promising results, published in Nature on Wednesday. Researchers genetically engineered mice so the MRGPRB4+ neurons would glow when active. Then they inserted a microscope into the mice's spinal cords to see what happened as they stroked, poked and pinched the mice. Certain neurons responded to unpleasant stimuli like pokes, but the MRGPRB4+ neurons only responded to stroking. After pinpointing the MRGPRB4+ neurons' physical stimulus, the researchers then found a chemical that could elicit the same response. When mice were injected with the chemical, the MRGPRB4+ neurons lit up, just as if the mouse was being stroked. The unique neurons were linked specifically to the hair follicles in the mice's skin, and the nerve-endings were very spread out. Thus, gently stroking their hindquarters would stimulate the mice but poking would not. And it turns out that humans have similar, stroke-sensitive neurons in the hair-covered portions of our skin. But do mice enjoy massage as much as people? When given a choice between the caress-like chemical and one with no effect, the mice most often chose the one that stimulated the neurons. The mice also showed fewer signs of stress afterward, which led researchers to believe the sensation was both pleasurable and calming. The results suggest that mammals may have evolved this propensity for caressing to encourage good hygiene through social grooming. It may also explain why certain hair-covered areas of the human body (think armpits, pubic hair) are more sensitive to touch or associated with pleasure.