Tonics laced with neurotransmitters,  amino acids, and other active chemicals  can sharpen your thinking. Or so they claim. 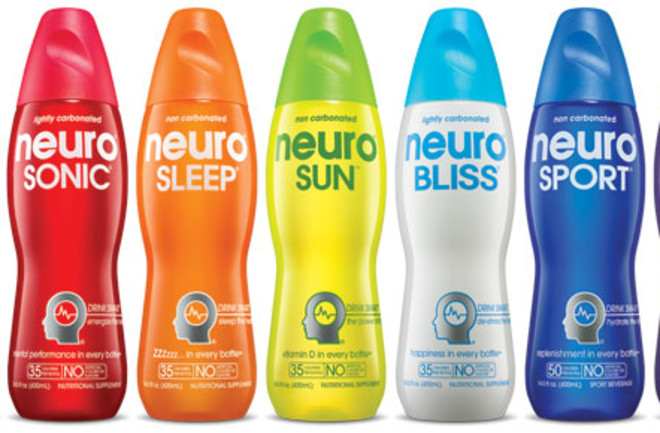 I dig a knife into a cardboard box, slit it open, and lift a plastic bottle of bright red fluid from inside. I set it down on my kitchen table, next to my coffee and eggs. The drink, called NeuroSonic, is labeled with a cartoon silhouette of a head, with a red circle where its brain should be. A jagged line—presumably the trace of an EKG—crosses the circle. And down at the very bottom of the bottle, it reads, “Mental performance in every bottle.”

My office is full of similar boxes: Dream Water (“Dream Responsibly”), Brain Toniq (“The clean and intelligent think drink”), iChill (“helps you relax, reduce stress, sleep better”), and Nawgan (“What to Drink When You Want to Think”). These products contain mixtures of neurotransmitters, hormones, and neuroactive amino acids, but you don’t need a prescription to buy them. I ordered mine on Amazon, and you can even find them in many convenience stores.

I unscrew the cap from one of them and take a gulp. NeuroSonic tastes like cherry and aluminum. I wait for my neurons to light up.

While I wait I call nutrition scientist Chris Noonan, who serves as adviser to Neuro, the company that makes NeuroSonic and a line of other elixirs for the brain. The inspiration for NeuroSonic came from the huge success of energy drinks, the caffeine-loaded potions now earning over $6 billion a year in the United States. The company’s founder, Diana Jenkins, posed a question: “Instead of just having a regular caffeinated energy drink, could we also include nutrients for cognitive enhancement and cognitive health?” Her team searched the scientific literature for compounds, eventually zeroing in on L-theanine, an amino acid found in green tea.

Noonan emailed me a packet of papers documenting the effect of L-theanine on the brain. When people consume the compound, their brains produce waves oscillating at between 8 and 13 cycles per second, a range of frequencies called the alpha band, which is prominent during relaxed but focused concentration. L-theanine appears to work particularly well in combination with caffeine. In a 2010 study in the journal Appetite, researchers gave 29 people the two compounds or a placebo. They found that L-theanine and caffeine together improved their subjects’ performance on cognitive tests where they had to switch quickly between different tasks.

Another compound in NeuroSonic is phosphatidylserine, naturally present in the brain and also in soybeans. Noonan sent me a long list of studies from Biological Psychology and other journals documenting all sorts of effects—an improvement in memory in one study, a better golf swing in another.

Each brand of brain drink has its own cocktail of ingredients. Dream Water contains GABA, a neurotransmitter that inhibits signals traveling from one neuron to another, and melatonin, a hormone popular for inducing sleep and treating jet lag.

There’s a lot of research behind these ingredients, but what happens when you actually consume them in one of the drinks? For all the talk of focus and memory and tranquil sleep on the labels, almost all the containers carry the same warning, typically in small type at the bottom: “These statements have not been evaluated by the Food and Drug Administration. This product is not intended to diagnose, treat, cure, or prevent any disease.”

Some experts nonetheless question the safety of the drinks if imbibed in quantity or by the wrong folks. When I reach Emory bioethicist Paul Root Wolpe, editor in chief of the American Journal of Bioethics Neuroscience, he opens up a can of outrage. “It is unethical to sell drinks with potentially powerful neurological effects without long-term scientific studies,” he tells me. “I am especially worried about messing with the brain chemistry of people with depression, ADHD, or other conditions that may be made worse by neuroactive chemicals.”

Social scientist Jayne Lucke of the University of Queensland shares Wolpe’s concern. If you buy a bottle of aspirin, you can see how many milligrams are in each pill and how many pills you should take a day. But you can’t find out how much melatonin is in Dream Water or how much L-theanine is in NeuroSonic. In many cases there is also no indication of how many bottles you can safely drink in a day. “People may be less cautious about their use than they would be if they were taking a pill, so it is important to be sure that even a high level of consumption is safe before the products are sold,” Lucke says.

The experts are especially concerned about the effect of brain drinks on young people. Drugs considered safe for adult brains can have harmful effects on developing ones. Antidepressants, for example, turn out to increase the rate of suicidal thoughts in teenagers. “What are the long-term effects of taking these drinks, especially on kids?” Wolpe asks. “It’s a dangerous experiment.” NeuroSonic carries a note that it is not recommended for children under 12. Dream Water bears a similar note that it’s for people over 18. But teenagers—who already have an ample thirst for energy drinks—can legally walk into a store and buy as many brain drinks as they want.

“It is critical that scientists step up to the plate to conduct rigorous research to understand the potential health risks of these products,” says Amelia Arria, director of the Center on Young Adult Health and Development at the University of Maryland.

As I chug through my collection of brain drinks, I wait for genius to hit me. I feel no surge of brilliance. My writing dribbles on. I decide to test myself for subtler changes. I ask my wife, Grace, a passionate gardener, to teach me some botany. She points to two bushes outside my office window. They are Skimmia, she tells me, and they’re dioecious. In other words, each plant is either male or female.

OK, OK, I say to myself, as a shot of Nawgan, “carefully crafted by a brain scientist to enhance concentration and focus,” courses through my brain.

A few hours later, Grace stops by my desk for a quiz. “So?” she asks.

Over the next few days I crack open other brands. Some give me a coffeelike buzz, but I take no great leaps of genius. I take an online test for a phenomenon known as the Stroop Effect. I look at the names of colors printed in different colors: red spelled out in green letters, for example. If someone asks you to name the color of the word, you have to struggle not to say red. When I drink a can of Brain Toniq (“Fuel your cranium. Get thinking again”), I don’t do noticeably better.

To make sense of my mediocre performance, I contact Martha Farah, a neuroscientist at the University of Pennsylvania, who studies the craze for cognitive enhancement. A growing number of college students are taking Adderall—typically prescribed for attention deficit disorder—in hopes of boosting academic performance. But Farah and other neuroscientists have found some of those students are fooling themselves. “There are a decent number of null results,” she says.

Farah isn’t surprised at my own null results. Just because a molecule appears to heighten attention in a small study on a couple dozen people doesn’t mean it will have any effect if it’s mixed into a drink and given to someone at random at an unknown dose. A full-blown clinical trial of a brain drink could give some indication of whether it works or not. Noonan promises that Neuro is going to start some trials soon, but that seems like quite the afterthought, given that the drink was developed in 2008.

Part of the problem—if you can call it that—may be that my brain was already in pretty good shape. I had just come off a pleasant vacation with my family, with lots of sleep and bike riding. “If you’re already performing well, they are unlikely to be helpful,” Jayne Lucke says. But that doesn’t necessarily mean brain drinks are good for people who are stressed or short on sleep or depressed. In those cases, Lucke argues, people would be better off addressing the underlying causes of their frazzled state of mind.

On the fourth day of my experiment in amateur psychopharmacology, I throw in the towel. I clear the empty bottles of brain drinks from my desk. I have another idea for getting a good night’s sleep and having a sharp brain at work. I’m getting to bed before midnight.