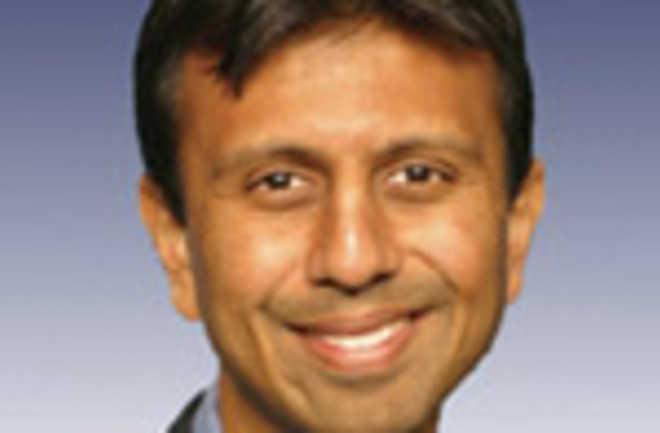 Some of you know that Bobby Jindal was just elected as the governor of Louisiana. Jindal has an interesting story, he's the son of Indian immigrants, received degrees in biology and public bolicy from Brown, passed on Harvard Medical School for a Rhodes Scholarship, and took over the Louisiana Public Health System at the age of 24.He is also a convert to Catholicism, and extremely politically conservative. Conservative blogger Patrick Ruffini had a political orgasm a few days ago in response to Jindal's victory; and it was typical on the Right blogosphere. I really don't think that Bobby Jindal winning in Louisiana implies a turn around for the national Republican Party. Nor do I think that he is a trail blazer for brown Americans; very few ambitious browns are going to grow up in the South and convert to Christianity and forgo a medical career because of an interest in public policy. That being said, I think that Jindal's election does say something about Louisiana.

In any case, this post isn't about politics, it is about science and its intersection with politics and culture. In 1995 Jindal wrote an article, Atheism's Gods, where he offered an apologia for Christian theological thought. At this point Jindal had already received his undergraduate degree (with honors) in biology from Brown, but the whole article implies a very weak understanding of evolution, or, a purposeful misrepresentation. For example, he states, "Even if we grant Dawkin's assumption that human beings are the product of unassisted evolution, which is quite a generous gesture since there is much controversy over the fossil evidence for evolution." This may speak to the reality that most people with undergraduate biology degrees don't necessarily have a strong understanding of evolutionary theory; frankly, many are careerist pre-medical types who are more focused on getting the best marks in organic and biochemistry than they are on knowing even the most minimal details of population genetics (which will likely be introduced once or twice in an introductory course). Jindal applied to medical school so one can surmise where his focus lay.Additionally, Jindal doesn't seem particular philosophically sophisticated. For example, he states "The rationalist assertion that God only exists if he is perceived by the subject is surely not how we approach the world." Actually, I think Jindal is thinking of an empricist, after all rationalists do accept that truths can be derived which are not perceived. This a pedantic point, rationalism does have particular connotations colloquially, but the distinction is one which I think a Rhodes Scholar should be aware of. Of course there is a great deal of garbled Catholic theology laced throughout the article, honestly I really don't see the value-add in Jindal's piece above &amp; beyond which a close reading of Summa Theologica would yield (I would argue that Jindal confuses and muddles the arguments greatly). Jindal's brief reads to me as if it was cribbed off an amateur Christian apologetics website. One may observe that Jindal was and is no professional theologian, but theology is not quantum physics, a purposeful layman can acquire the knowledge which would allow one to present arguments with a modicum of eloquent fluency.This brings me to my last point, the whole article is an illustration of the reality that extremely intelligent people can also be very ignorant. I have no doubt that Bobby Jindal has a world class mind; and he certainly succeeds and excels at any task which catches his attention. It seems clear to me that when it comes to science &amp; religion he is out of his depth. His characterization of those who disagree with his own religious views is laughable in terms of the inaccuracies in the broad brush pictures which he paints for the reader, and that is surely a good indication of the superficiality of his knowledge base. Jindal can think fast and with great analytic agility, but without a base of facts to manipulate and put through the analytic grinder you produce no value added end product. In short: garbage in, garbage out.Bobby Jindal converted to Catholicism as a teenager, and a very conservative form at that. This article emerged 10 years later, and shows quite clearly the suffocating impact which narrow circles can have. I don't doubt that Bobby Jindal is extremely intelligent, but if I had to guess what sort of person wrote the essay above I wouldn't have felt embarrassed assuming that the author was an average student at a Christian high school! This doesn't mean that Jindal isn't an efficient technocrat, his record speaks for itself. But I think that this piece would suggest he is not truly broadly educated. An alternative conclusion one can draw from the piece is that Bobby Jindal is always playing to his audience, so he said "all the right things," even if he knew they were silly things.1 - Being broadly educated to me does not mean that one should be able to state with prefect precision the difference between rationalist and empiricist orientations in philosophy or the nature of the evolutionary fossil record. Rather, it means that one should know enough to know when one is out of their depth!