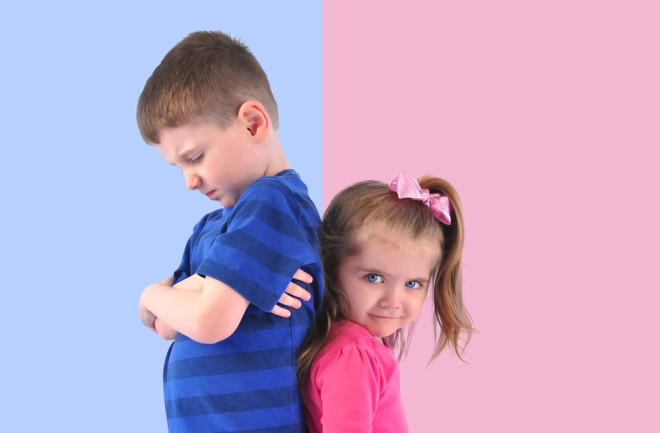 Anyone who has kids, or has been to a toy store, is familiar with the gender color code: blue is for boys, pink is for girls.

But actually, it looks like associating a gender with a particular color is a fairly recent development and, like so much these days, is actually the fault of society, man. And according to a study that came out yesterday, gender-based colors are a social preference we can actually manipulate in little kids — and it can actually have real consequences.

The study, which appeared in the journal Sex Roles, tracked the preferences of 126 Chinese children in Hong Kong, ages 5 to 7. First, they just wanted to make sure Western color preferences (blue=boys, pink=girls) had permeated the Asian children. They had.

With that established, things got interesting. The researchers introduced two new colors into the mix, green and yellow, and split the kids into two groups. The control group just got to play with toys of the new colors and that was that, but the experimental group first heard that yellow was for girls, and green for boys. Would that, the researchers wondered, be enough to affect the kids’ color preferences, and even cognitive abilities?

The answer, on both counts, was yes. Apparently little kids are super easy to manipulate!

Specifically, the boys who were told green was a boys’ color almost immediately began preferring to play with green toys, and ditto for girls with yellow. And not just toys — the color itself became more or less attractive. Further, both boys and girls in this group preferred “their” color over boys and girls in the control group. (The researchers took into account the kids’ previous color preferences for green and yellow, and even had the tester wear black to prevent any undue color influence.)

Interestingly, girls playing on “boy-colored” puzzles and vice versa didn’t do worse than kids playing with the appropriate color, as the researchers expected. Everyone did about the same as everyone else, on that front. What did happen, though, was the boys in the control group did better than everyone else. So, while the colors themselves didn’t affect the kids, the existence of gender roles did, with boys coming out ahead.

As the study states: “Our results provided another picture of the effect of gender labels by showing that as long as boys had been exposed to information about gender-appropriateness, their subsequent performance improved.”

Not surprisingly, the researchers end up suggesting that it might not be a good idea to segregate toys into clearly marked and colored boys’ and girls’ sections. It’s not exactly a new suggestion, but now at least more science backs it up.