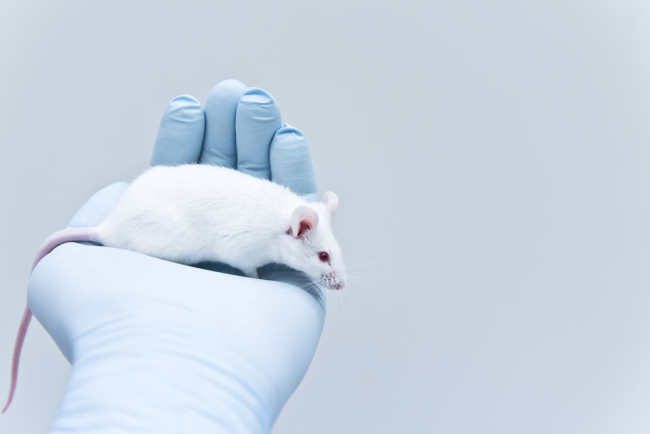 Returning sight to those for whom it’s slipped away has been a goal of scientists for decades. But repairing or replacing the delicate internal machinery of the human eye has proven difficult so far. A few experimental devices have managed to grant low-resolution sight to the blind, but most require the use of bulky electronics and external power sources.

But researchers from Fudan University and the University of Science and Technology of China say that they’ve come up with a more elegant solution to curing some forms of blindness. They simply swapped out dead photoreceptors in the eyes of blind mice — the rods and cones that produce electrical signals when hit by photons — with artificial versions made of gold and titanium oxide.

The human-designed photoreceptors take the form of nanowires studded with tiny gold flakes, which help tune the array to respond to light in the visible range. The wires are surgically implanted in the same space that the photoreceptors once occupied, and they remain in physical contact with retinal cells to pass along electrical impulses to the visual cortex.

An illustration from the paper showing, from left to right, an eye, a retina with healthy photoreceptors, and a retina with a nanowire array in place. (Credit: Tang et. al)

The mice in the experiment had been genetically engineered to experience a progressive degradation of their photoreceptors, similar to what happens in people with retinitis pigmentosa and macular degeneration. Both diseases disrupt the eye’s ability to pass sensory information on to the brain, and can lead to permanent vision impairment if not treated. Crucially, however, the rest of the eye and the brain’s visual processing system remain intact, meaning that visual signals can still be processed if they reach the brain.

The new photoreceptors are responsive to light in the green, blue and near ultraviolet spectrum, though their wires can’t grant mice color vision yet. Future tweaks to their method could likely reproduce colors, the researchers say. They published their research Tuesday in Nature Communications.

The researchers tested their system by confirming that the mice’s visual cortexes responded when light hit their eyes. Their retinal cells and visual processing system appeared normal, the researchers report. Their pupils even began to dilate again, another indication that their eyes were once again sensitive to light. They had succeeded in repairing the missing link between eyes and brain.

Compared to their normal brethren, the formerly blind mice responded to light of comparable intensity, the researchers report, and the artificial photoreceptors were sensitive to dots of light less than 100 micrometers across, or about the size of a human hair.

At the moment, it’s difficult to tell exactly what the mice were seeing. Though it’s clear that signals were making it through to the visual cortex, exactly what images the mice’s brains rendered are a mystery for the moment. The visual information was probably somewhat limited, at the very least, given that the nanowires only respond to some wavelengths of light.

After eight weeks, the once-blind mice who had been implanted with nanowires showed no signs of discomfort or injury. But the design is still experimental, for now, the researchers just hope that their work will lead to better devices that could one day allow humans who have lost their vision to see once again.