Regardless of how unhip I may be now (a matter for everyone to decide for themselves), it's nothing compared to how unhip I was growing up, especially when it came to music. The first 45rpm single I ever purchased was by Kiss, and the first full-length LP was by the Electric Light Orchestra; let us say no more about that. In particular, I didn't know anything about punk rock, and certainly didn't come close to appreciating the genius of the Clash. Sure, I knew Rock The Casbah from the video on MTV (although little did I suspect it would some day become a conservative rock anthem, the Clash being secret Republicans at heart). But I didn't at all understand the skill and passion with which the band blended hard-core punk sensibilities with a disparate palate of musical influences. 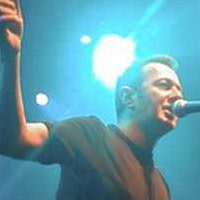 Which is just as well, as my lack of familiarity allowed me to fall in love with frontman Joe Strummer on the basis of his solo work with backing band The Mescaleros. After the Clash broke up in 1986, Strummer's output waned, while he appeared in a couple of films and contributed some soundtrack music. Then, starting in 1999, he released a series of three albums of astonishing range and beauty: Rock Art and the X-Ray Style, Global a Go-Go, and Streetcore. The last of these, sadly, was posthumous, as Strummer died unexpectedly of a heart attack in 2002. (I'm sure everyone else knows all this. Me, I never whould have discovered Strummer if Mondo Bongo hadn't been prominently featured on the soundtrack for Mr. and Mrs. Smith. Thanks, Brad and Angelina!) Reviews of Strummer's solo work have been largely positive, but somewhat tempered by confusion due to a lack of obvious continuity with his punk roots. Personally, I think that if the albums are considered in their own right, rather than as "by the guy from the Clash" with all the preconceptions that implies, they are an amazing achievement. Strummer was always interested in different genres of music (and reggae was an important influence on the Clash), but here he mixes a mad panopoly of styles -- from punk to folk to reggae to rockabilly to Middle Eastern to Latin to African and on -- with equally eclectic instrumentation and colorful lyrics. (Where "colorful" should occasionally be taken to mean "surreal bordering on nonsensical," unless I was patrolling a Pachinko / Nude noodle model parlor / in the Nefarious zone is more transparent to you than it is to me.) Along with drums/bass/guitar, a Mescaleros song might feature violin, whistle, mandolin, organ, conga, bells, bodhran, udu, accordion, saxophone, dulcimer, and/or whatever else was lying around. While he could still rock with the best of them, Strummer could also step back with an acoustic tune like Bob Marley's Redemption Song (also recorded elsewhere in a duet with Johnny Cash). You can get a good idea of the playful energy, at once exuberant and reflective, of Strummer's later music from the lyrics to Bhindi Bhagee. It's a song about eclectic food choices, but there is an explicit parallel (which the lyrics are happy to spell out) with eclectic musical choices. Of course, if you listen to a bit, the energy is even more obvious.