Seriously, why did Mr. and Mrs. Smith get such mixed reviews? You have two of the prettiest people in the world, exchanging witty banter and steamy looks (and a substantial number of gunshots) with each other, moving through a visual feast of elegant settings while the surrounding chaos leaves their makeup and fashionable clothing largely undisturbed. What is not to like about this movie?

You will be unsurprised to hear that I have a theory. Like many works of genius, Mr. and Mrs. Smith is misunderstood. The movie makes no pretensions to depth or profundity; it is a genre film, pure and simple. But it skirts the edges of the conventions of its genre -- action comedy -- in interesting ways. "Action comedy" is a somewhat novel and unstable classification to begin with. Classic action films may feature a witty line here and there, but they would never be mistaken for comedies. In the post-Raiders of the Lost Ark era, however, the hybrid has become more common, as witnessed in the success of franchises from Lethal Weapon to Men in Black. But still, there are rules. Within the conventions of an action film, there are two standard ways of creating comedy: to play the action straight but include a substantial dose of humorous situations and dialogue (Lethal Weapon), or to move toward parody or satire (Men in Black). In the former case, it is taken for granted that the adventure scenarios must be traditionally realistic and thrilling; in the latter, allowance is made for a greater degree of slapstick silliness, and realism is happily tossed aside. Mr. and Mrs. Smith falls into neither of these modes. No serious attempt is made to paint a realistic scenario -- two professional assassins who have been married to each other for years without knowing what their spouse did for a living would be difficult to make believable. Mrs. Smith works in gleaming high-tech surroundings, where all of her co-workers would appear to be very attractive and fashionable young women; Mr. Smith, in contrast, works in sleazy surroundings that call to mind private investigators in the Sam Spade mold. We are never told what these organizations are, who their clients might be, nor how they fit into a larger picture. We are supposed to simply recognize the accepted tropes of the genre, and enjoy the fun that the characters themselves are so obviously having. But the fun is not slapstick or parodic -- it is affectionate. Mr. and Mrs. Smith is not a satire, calling our attention to the foibles of the genre or of society; it is a caricature, exaggerating notable features for purposes of amusement. The relevant distinction is between "making fun of" and "having fun with." The point is neither realism nor social criticism; it extends to having a good time and no further. And the talents deployed towards this end are considerable: Jolie is obviously an extremely talented actress, while Pitt is underappreciated as a brilliant comic actor. The cinematography is colorful and evocative, and the dialogue zips along with very few sluggish patches. The critics, by and large, don't get it. David Denby, just to pick an example, complains about the absence of motivation when Jolie "appears at some sort of club in a strapless, shiny, black patent-leather rig, flogs some guy in a back room, and then breaks his neck." Would more backstory have really enriched that scene? It's like watching Bugs Bunny and complaining that we aren't told how rabbits learned to talk. Admittedly, the film is very much of its time. Although it is not a satire, I imagine that it wouldn't be as enjoyable for audiences not immersed in a set of expectations about action films, comedies, and movie stars. It's not The Maltese Falcon, but that's no reason not to enjoy it on its own terms. Perhaps next time we will discuss how Johnny Depp looks in lipstick. 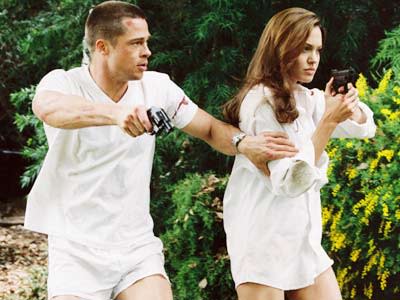