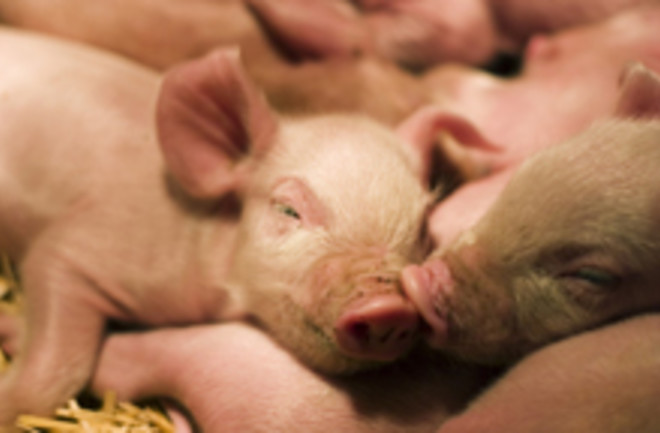 And here we thought uncultured swine didn't care for classical music. Piglets, like many young mammals, like to fight amongst themselves, and pressing them together in the confined space of a hog house only exacerbates this tendency. However, a team of Dutch scientists led by Francien de Jonge at Wageningen University announced this week that they'd discovered a way to calm the little pigs—playing the music of Edward Elgar and Johann Sebastian Bach. The researchers divided their pig sample into a dozen groups of 23 each; at the same time each day the team cranked up the classical music. Six of the piglet groups were then allowed access to a "playroom," while the other six got to listen to the music but not go out for recess. When the piglets reached four weeks old, they were separated from their mothers and placed in a pen together, a rather stressful situation for youngsters. But when the scientists played back the same soundtrack, de Jonge says, piglets who had been taught to associate music with play fought less and played more, even without their own playroom. Those who had gotten to use the playroom showed 10 percent fewer injuries than those who didn't get in, de Jonge says, and even the rejected piglets were calmer than normal when they heard Bach and Elgar. Plenty of studies have come out praising the effects of classical music on human babies' intelligence, though exactly why and whether that works is a controversial subject. For piglets, de Jonge says, most likely they learned to associate classical music with good times, and the positive feelings endured even without the playroom. However it happens, she says, happier pigs are good for humans. We've written on the problem of antibiotic overuse in livestock before, but pigs who play nice with one another get fewer injuries and need fewer antibiotics. Just don't tell Bach and Elgar fans that de Jonge says she chose the composers' music because it is "similar to the comfortable grunts pigs make during foraging." Image: iStockphoto