Behind the Scenes & Under the Hood: Virtuality's Antimatter Spacecraft Engine 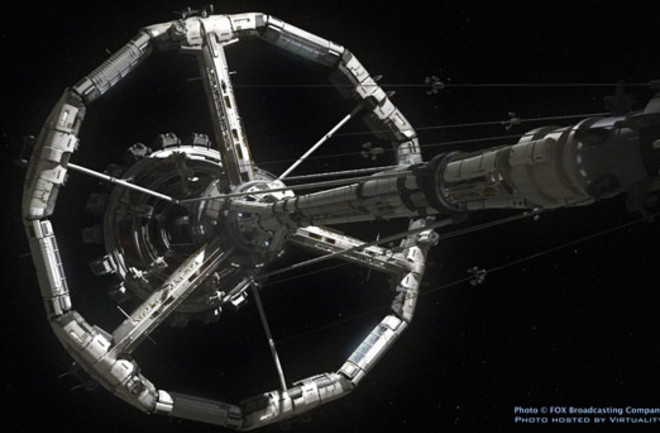 Today we present a very special installment of the Codex Futurius, Science Not Fiction's look at the big scientific ideas in sci-fi: Kevin Grazier—JPL physicist and friend of SNF—gives an insider's peek at the workings of and discussion around the Orion antimatter drive used to propel the Phaeton starship in Ron D. Moore's recent TV movie, Virtuality. Grazier was a science adviser for the movie (which was intended to be the pilot for an ongoing show), so he was right in the middle of these discussions. The screenshot further down in this post shows the actual spreadsheet used in the production to see what stars would be reachable with the Orion drive. Without further ado, here's some sci in your sci-fi: DISCOVER: What kind of realistic technology could we use to get to nearby stars? Which stars would be feasibly reachable by such technologies? Kevin Grazier: It’s a saying plastered on T-shirts and bumper stickers—the kind sold at both science-fiction conventions and physics departments nationwide:

The speed of light, of all electromagnetic energy, in a vacuum is the ultimate speed limit in the universe. Nothing that has mass or carries information can travel faster. This universal speed limit is a direct fallout from Albert Einstein’s special theory of relativity. Special relativity implies that the speed of light in a vacuum is a universal constant, but values that we tend to think of as constant in our daily experience—mass, length, and the rate of the passage of time—are not. Depending upon the relative velocity of two observers, these values will “adjust” so that both observers see the speed of light as a constant. Two observers travelling at high speeds relative to each other will find themselves in strong disagreement about measurements like the length of each other’s spacecraft and the rate of the passage of time. Another consequence of special relativity is that, as an object travels increasingly faster, it behaves as if it has increasingly more mass. Therefore the amount of thrust it takes for an incremental change in velocity (known in the space program as a delta-V) is vastly greater at high speeds than at low. This effect is also highly nonlinear: It takes almost an order of magnitude more thrust to accelerate from .9c (nine-tenths of the speed of light) to .99c than it does to accelerate from .5c to .7c. An object travelling at the speed of light would act as if it had an infinite amount of mass and it would, therefore, require an infinite amount of energy (read: an infinite amount of thrust/fuel) to attain it. This is, of course, a shame for civilizations (like ours) who want to explore planetary systems around other stars first hand. The distances involved are, well, astronomical. Just within the Solar System, it typically takes NASA probes 6 months to a year to reach Mars; it took Cassini 6 years, 9 months to reach Saturn. The (currently) fastest object created by humankind, the Voyager 1 spacecraft, will take 40,000 years, give or take a few thousand years, before it makes its closest encounter with its first star: AC+79 3888—currently located in the constellation Ursa Minor. At that speed few Time Lords, and even fewer humans, would survive the journey to even “nearby” star systems. Current chemical rockets, and even the more efficient ion drives, cannot propel humanity to the stars at a reasonable speed, but there are concepts for interstellar spacecraft drives that are promising, that could be constructed in a practical sense, and you may be surprised how long the designs have been around. Stanisław Ulam, a Polish mathematician who participated in the Manhattan Project, proposed nuclear pulse propulsion back in 1947. The idea is simple: explode a series of nuclear bombs behind a spacecraft. The explosions are directed against a thick steel “pusher plate”. The pusher plate is, in turn, connected to the spacecraft by a huge shock absorber to lessen the high G forces from the impulsive accelerations. In the straightforward terminology of Jimmy Johnson, the engineer on the Phaeton:

Basically, we gonna blow us up a bunch of big ass bombs off the ass-end of this here ship. Big ass bombs gonna vaporize some big ass alloy plates, and the translation of all that big ass energy’ll make us go real fast. Real fast. Yippe kai-ay, m…

The practical attempt to design and develop nuclear-pulse propulsion was performed by General Atomics in San Diego in the 1950s and 1960s. Ultimately the Nuclear Test Ban Treaty between the Unites States and Soviet Union made the testing for such a drive illegal, nevertheless over 50 years ago the design seemed practical and could be implemented within the bounds of existing technology. For more information, NASA and Star Trek designer Mike Okuda provided still more details on Project Orion, the U.S. government's investigation into a nuclear-pulse spacecraft. An Orion-style drive powered by thermonuclear explosions could theoretically reach speeds of .08c to .10c. That could get a spacecraft to the nearest stars within a human lifetime, but not within Phaeton’s 10-year mission. Virtuality is set in the mid-21st century, and it’s reasonable to assume some technological advances in the intervening time. Phaeton does not use thermonuclear explosions for propulsion, the charges dropped out the back are matter/antimatter charges (yes the thrust for Phaeton is, in essence, provided by photon torpedoes). The obvious assumption is that by the mid-21st Century, science has solved problems regarding the generation and containment of antimatter. One estimate has shown that Orion-style drive propelled by matter/antimatter explosions could attain speeds of .5c to .8c. If Phaeton’s Orion Drive (named after the real-life nuclear concept) could propel it to 80 percent the speed of light, it could get to Sol’s nearest neighbor, Alpha Centauri (4.4 light-years away) in just 5 years, 6 months. That’s certainly a vast improvement, and shortens the round-trip mission time to several nearby stars to less than a human lifetime. Only, it gets better. Special relativity, which bit us in the asteroid when it comes to top-end velocity, does our crew a favor as our spacecraft attains speeds that are a high fraction of the speed of light. Recall that for objects travelling at relativistic speeds, values like mass, time, and length appear to “adjust” to keep the speed of light a constant. At high speeds, distances that we measure at “rest”, or at low speeds compared to c, appear to be shortened. This effect is called Lorentz contraction or Lorentz-Fitzgerald contraction. Moving at a snappy .5c, the distance to Alpha Centauri is only 3.8 light-years (down from 4.4), and the apparent travel time is a bit over 7 years, 6 months. At 80 percent light speed, the distance is 2.6 light-years, and the travel time is 3 years, 3 months—less elapsed time for the crew than it would take for light to make the same journey. Travelling at a speed of 0.7c is the “break even” point, where the combination of spacecraft velocity and Lorentz Contraction means you are travelling at “functional light speed” (the distance to Alpha Centauri in that frame would be 3.1 light-years and the travel time 4 years, 5 months). Of course time passes at different rates based upon their relative speeds as well, a phenomena called relativistic time dilation, so if Phaeton were travelling at a speed of .7c, for every year that passes for the crew, a year and five months would pass for The Edge of Never viewers back on Earth. Billie Kashmiri alludes to this in her confessional near the end. With the phenomena of Lorentz Contraction as an aid, many more star systems become potential targets of a 10-year mission. There are sound scientific arguments why astronomers believe that any star that could potentially have a planet with life, in particular intelligent life, must be similar to our Sol: from mid-F range on the Herzsprung-Russell Diagram to mid-K. There are several stars in that size/temperature range in Sol’s neighborhood. Below is a screen capture of a spreadsheet that the producers of Virtuality used to select the target star for Phaeton’s mission (text color corresponds to the star’s color): On the spreadsheet are the stars’ distances at rest, and at various fractions of light speed—with the corresponding travel time.

, the nearby star that the Phaeton is sent to explore, has one

planets orbiting it, as well as at least three asteroid/planetesimal belts. If we assume that Phaeton’s Orion Drive can get her up to .8c, or 80 percent the speed of light, then because of Lorentz contraction the journey (normally 10.5 light-years) is only 6.3 light-years, and it takes just under 7 years, 11 months. So if the Orion Drive can reasonably get a spacecraft up to .8c, then Phaeton’s mission is actually closer to 16 years. If, however, the Orion Drive was capable of propelling Phaeton to .9c, or 90 percent the speed of light, then the distance to Epsilon Eridani is only 4.6 light-years, and the one-way flight time is 5.1 years. So in order for Phaeton to get to Epsilon Eridani and back within the stated 10-year mission duration, we clearly see that the ship’s Orion Drive would have to propel her to over 90 percent the speed of light (.9c). For all the elements of Phaeton’s mission that might be practically attainable by the mid-21st Century, this is where a little science fiction enters the picture. Thank you to Steve Cooperman, Doug Creel, and John Weiss for their helpful input and comments.