In late 2016, staff at the US embassy in Havana, Cuba, began to report hearing unusual sounds. Over the coming months, some staff were struck down by hearing loss and concussion-like symptoms. The strange sounds were interpreted as the cause, perhaps even reflecting a sonic weapon of an unknown nature. 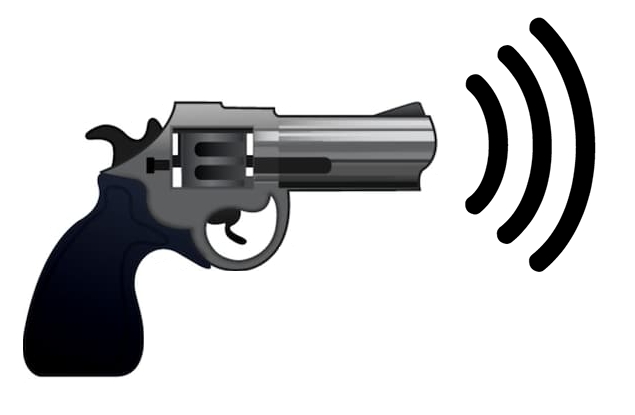 The story of the ‘Havana embassy attack‘ has been told in detail but, until recently, there were no scientific studies of the event or its aftermath.

That changed on February 15th, when leading medical journal JAMApublished a paper entitled Neurological Manifestations Among US Government Personnel Reporting Directional Audible and Sensory Phenomena in Havana, Cuba. In this article, authors Randel L. Swanson and colleagues studied 21 individuals who had been in the embassy and had suspected exposure to the sonic anomaly.

Swanson et al. concluded that the patients showed a pattern of symptoms including “persistent cognitive, vestibular, and oculomotor dysfunction, as well as sleep impairment and headaches.” A neurological basis for the syndrome was suggested: “These individuals appeared to have sustained injury to widespread brain networks”, despite never having experienced head trauma. In 14 of the 21 victims, the symptoms were so disabling that they still had not returned to work.

Although the JAMA paper did not attempt to establish the cause of the symptoms seen in the embassy workers, it did not exclude the possibility that some kind of ‘sonic weapon’ was involved.

But now, the JAMA study has come under criticism in a paper published yesterday in the journal Cortex: Alleged “sonic attack” supported by poor neuropsychology, by authors Sergio Della Sala and Roberto Cubelli. (Della Sala is chief Editor of Cortex.)

The thrust of the criticism is a very simple one: most of the ‘cognitive dysfunction’ reported in the JAMA study wasn’t actually dysfunction. Della Sala and Cubelli argue that Swanson et al. relied on a very broad definition of ‘impairment’ that would generate many false positives:

In eTable 2, the authors report as ‘impaired’ any performance below the 40th percentile. They write “Bold highlighting denotes abnormality or <40th percentile” and quote three text manuals, none of which authorizes the use of such high threshold as cut-off.

The use of an arbitrarily high threshold gives rise to numerous false positives. Assessing any group of normal, healthy people with a random battery of tests using such a high threshold would result in several of them performing below the chosen cut-off score in one or another test.

Here’s that eTable 2 from the JAMA paper, which shows cognitive test scores for the 6 patients in whom full neuropsychological testing was performed: 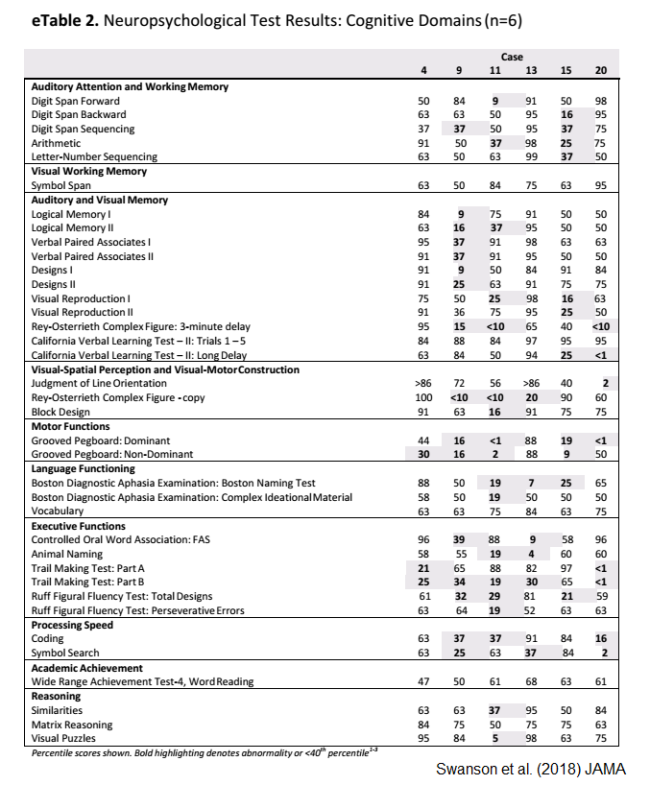 There are 222 cognitive test scores reported here by my count, of which 62 are below the 40th centile. What this means is that 60% of normal healthy adults would score above the 40th centile, while 40% would score below. As Della Sala and Cubelli point out, this is a very liberal threshold of abnormality.

In fact, there is actually less abnormality here than would be expected in healthy people: 62 scores are below 40%, whereas we would expect to see 40% of 222 which is 89 – although, as the scores are not independent, we shouldn’t read too much into this.

Della Sala and Cubelli go on to point out that if Swanson et al. had used the more conventional 5th centile cut-off for abnormality, 3 of the 6 patients would have scored normally on all tests. The other 3 would have showed impairment on a few tests, but with no apparent logical pattern: “the lack of coherence makes it impossible to advance any neuropsychological diagnostic interpretation.”

The authors conclude that

There is no evidence that the people assessed present with any cognitive deficit (to be linked or not with their stay in Cuba). Subjective cognitive symptoms cannot be supported by the reported data. There is no ‘new syndrome’ to contemplate. Hence, the search for its cause is moot…

The condition suffered by the US diplomats in Cuba has been labelled “mysterious” (Rubin, 2018). The real mystery though is how such a poor neuropsychogical report could have passed the scrutiny of expert reviewers in a first class outlet.

In fairness to Swanson et al., we should note that the cognitive test score analysis, criticized by Della Sala and Cubelli, is only one part of the JAMApaper, albeit an important part. The JAMA article also describes self-reported cognitive, mood, and other symptoms, along with ‘objective’ abnormalities in many patients on tests of vision, hearing, and balance and vestibular function.

However, we might note here that these tests are not described as being performed by blinded testers – in other words, the testers may have been predisposed to expect to find abnormalities. Blinded testing, with a control group of individuals who were not exposed to the Havana noise, would have provided much stronger evidence, I think. It’s also notable that neuroimaging revealed no abnormality in the majority of cases, and unspecific, possible abnormality (multiple T2-bright white matter foci) in 3 patients.

Overall, I agree with Della Sala and Cubelli that the JAMA paper is pretty weak. Clearly, something has happened to make these 21 people experience so many unpleasant symptoms, but at present I don’t think we can rule out the possibility that the cause is psychological in nature.