Bad Mobs of Good People: The Paradox of Viral Outrage

People become less approving of social media outrage the more people join in with it. One person rebuking another is fine, but ten people doing it looks like a mob.

This is the key finding of an interesting new paper called The Paradox of Viral Outrage, from Takuya Sawaoka and Benoît Monin of Stanford.

According to the authors, the titular ‘paradox’ is that “individual outrage that would be praised in isolation is more likely to be viewed as bullying when echoed online by a multitude of similar responses.” In other words, how can it be that lots of individually good actions add up to one not-so-good whole?

Sawaoka and Monin carried out six experiments to investigate how people perceive online outrage. Participants saw an initial post and a series of outraged replies to it. The provocative posts were taken from real viral scandals, although the names and faces of the original posters were changed. How many do you recognize?

The main finding across all six studies was that people view outraged commentators more negatively if there are 10 of them (‘viral’), compared to only 2 of them (‘non-viral’), attacking the same target. Interestingly, even the first person to leave a comment was seen more negatively if lots of other people subsequently followed them: 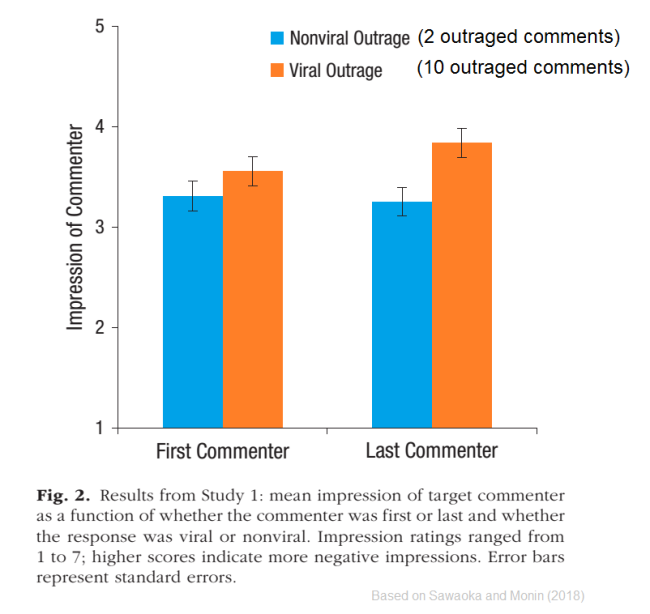 The main result was replicated several times, and all of Sawaoka and Monin’s experiments had good sample sizes (e.g. N=390 for Study 1), so the ‘paradox of viral outrage’ looks very robust. The effect is not very big, roughly 0.4-0.5 points on a 7 point disapproval scale, with a Cohen’s d effect size of 0.3-0.4. Then again, in the real world, a viral ‘mob’ could have many more than 10 members, so the effect could be bigger.

Further experiments showed that the disapproval for viral outrage was mediated by sympathy for the target. Yet this sympathy could be extinguished by asking participants to write their own ‘tweet’ condemning the target. These first-hand commentators did not feel bad about the viral outrage, unlike participants in the role of third-party observers:

Viral outrage creates a widening gap between how commenters see themselves and how they are seen by others, as individuals who participate in viral outrage continue to believe they are in the right, even as outside observers come to disagree.

The authors conclude that there is a real paradox here that offers no easy answers:

How can a person condemn injustice without suffering backlash? Our findings do not provide easy solutions… The challenge lies in reconciling the counterintuitive notion that a collection of individually praiseworthy actions may cumulatively result in an unjust outcome.

Personally, I do feel sympathy for the targets (most of them), but I don’t think we can blame individual members of viral mobs. I see both the targets and the mobbers as victims, in a sense, of the real monster, which is social media itself. I like social media, I use it, but it’ll eat you if it gets a chance.

These studies could be extended, and I hope they will be. I wonder how participants would view a hypothetical social media user who sees an outrageous post and consciously decides not to reply to it? It would also be nice to see what happens if we add some comments agreeing with, or defending, the target. This would be more realistic, and I predict it would actually reduce the disapproval of viral outrage.

Finally, I note that all of the outrageous original posts included in this study had been intended as humorous, with the arguable exception of the one in Study 4B. It would be interesting to see whether the same results would be seen for viral outrage against an outright hostile or hateful statement.