According to a new paper, mass shootings such as Sandy Hook and Aurora may be the result of Autism plus psychosis: A 'one-two punch' risk for tragic violence? The first thing to note about this paper is that it's in Medical Hypotheses. 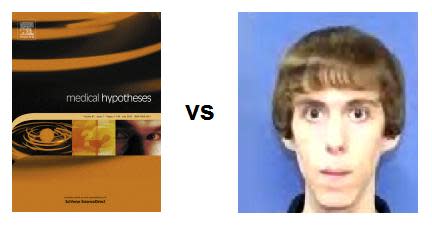 I don't normally take seriously anything that appears in this rather unique journal. This paper is, however, co-authored by Edward Shorter, an eminent historian of psychiatry; his book about it was a big influence on me. So it deserves a fair hearing. The authors set the scene:

In the recent series of mass murders in Connecticut, Colorado, Norway and elsewhere, a pattern seems to be emerging: young men whose social isolation is so extreme as to verge on autism apparently become prey to psychotic ideation. And under the influence of this ideation they wreak terrible violence. ...What is actually the matter with these young men and how should we as a society conceive their pathology?

The answer, we're told, is a combination of autism, and psychosis. Autism is not associated with violence per se, but psychosis is - and rates of psychosis are higher in autistics. What's worse, in such cases, psychotic symptoms may go undiagnosed and untreated because they're written off as just part of the autism. The authors offer a remarkable analogy to illustrate their point about how an illness on top of an existing disability can lead to tragedy:

A middle-aged woman with severe mental retardation was brought to the ENT service for debulking of a metastatic melanoma of the nose approximately the size of a peach. The tumor had been diagnosed only a few days earlier; yet it had already invaded the brain, leading to a terminal condition. The surgical resident commented on how unfortunate it was that the melanoma wasn’t detected earlier when it could have been easily ablated... Another team member speculated this may often be the fate of individuals with disability; few people care, and no one notices until it is too late

The trouble is, this is, as the authors admit, all speculation. The authors write on the very first page:

It is unknown whether [these killers] had an autism spectrum disorder (ASD) or other neurodevelopmental condition; similar conjectures regarding psychotic illness and personality disorder remain unanswered.

This strikes me as a fairly big limitation. But even if we grant that they did all have autism plus psychosis, what would that mean? I don't think it would explain much. We all know there was 'something wrong with' these individuals, they fit a very definite 'type', but I'm not convinced that putting a label on it (or two) helps us to understand it.