Augmenting Memory With A Neuroprosthesis

A new paper in the Journal of Neural Engineering describes Facilitation of memory encoding in primate hippocampus by a neuroprosthesis that promotes task-specific neural firing The research - from Sam Deadwyler's team at Wake Forest University (and funded by DARPA) really is pretty amazing - if it pans out. Four Rhesus macaques were trained to perform a short-term delayed-match-to-sample memory task, involving remembering the position and shape of an icon on a screen, and then picking it out from a line-up up to 40 seconds later. The task is difficult. Even though the monkeys were trying hard to succeed, in order to earn a tasty juice reward, they made a lot of mistakes. ...until they got a helping hand: 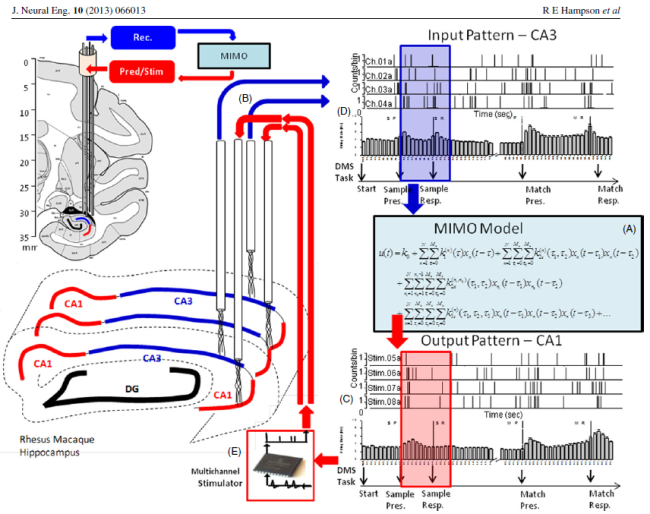 An array of electrodes was implanted into the hippocampus, able to both record neural activity and stimulate it. Using a mathematical model called "MIMO", the authors first determined the pattern of activity that was seen when each animal correctly performed each type of trial ("strong code"), and when they failed ("weak code"). Then, by monitoring activity on a trial-by-trial basis, they were able to predict whether a monkey was going to succeed or not. If it was set for failure, they stimulated the hippocampus to reproduce the 'correct' activity pattern - they injected the "strong code" that was missing. The result?

The MIMO stimulation (red line) improved memory performance compared to no stimulation (blue) and a 'scrambled' stimulation (green) containing no useful information, a crucial control condition. Interestingly, the scrambled stimulation did not impair performance. Information processing in the hippocampus must be fairly robust to 'noise'. One for the computational modellers to ponder. Two years ago, the same team reported the success of this system in rats. But implementing it in non-human primates is a big step up the ladder of brain complexity (although the anatomy of the hippocampus is fairly constant across species.) Deadwyler et al have also published the results of a different neuroprosthesis in monkeys, one aimed at the prefrontal cortex. In that paper, the 'helping hand' helped the monkeys make the correct choice when selecting their response. This time, it was the actual encoding of memory that was boosted. So that's cool. A relatively simple algorithm was able to do the hippocampus's job better than it did it itself. But I wonder, is this because the delayed-match-to-sample memory task is so artificial and repetitive - i.e. unlike the kinds of tasks that the hippocampus evolved to perform? Would a neuroprothesis be able to boost a monkey's memory 'in the wild'? Which begs the really big question - how might this help humans?