Are The Mafia Psychopaths?

The view that the Mafia is an organization of especially ruthless psychopaths is wrong – in fact, members of ‘Cosa Nostra’ have lower psychopathic traits than other criminals.

That’s according to a new study from Italian researchers Schimmenti and colleagues, who, appropriately enough, are based in Sicily, the Mafia’s birthplace 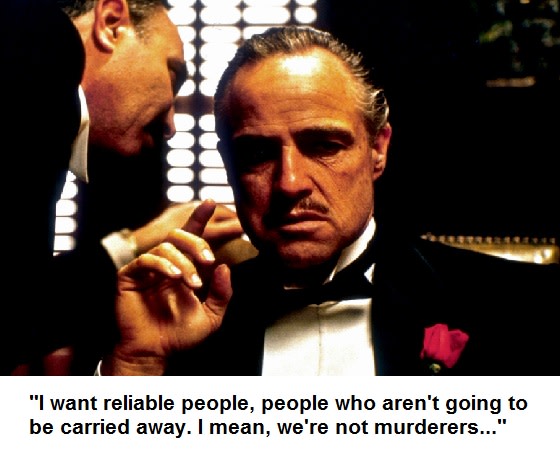 Seven of the Mafia members (23%) had been convicted of murder, 17 (57%) for other violent offenses, and the remainder for crimes including trafficking in narcotics, extortion, fraud, sexual exploitation and kidnapping…

They compared them to a comparison group of 39 prisoners from the same jail, whose crimes were not gang-related. Their offenses included murder, rape, child sexual abuse and armed robbery.

To measure psychopathic traits, the researchers administered the Italian version of the Hare Psychopathy Checklist Revised (PCL-R). This is an interview in which the assessor rates whether the subject displays each of 20 specific features characteristic of psychopathy, such as pathological lying; impulsivity; and callous lack of empathy. The scores are added up to give a total, with 30+ being the conventional cutoff for being ‘a psychopath’.

It turned that none of the Mafia scored above cutoff on the PCL-R, while 10% of the comparison group did. Overall, scores were significantly lower among mob members than in the ‘other’ criminals. The difference was quite pronounced.

Numbers can only tell us so much. Also interesting are Schimmenti et al’s descriptions of the Mafia personality:

This means that they were less ‘manipulative’, ‘Machiavellian’, ‘narcissistic’, ‘unemotional’, ‘parasitic’ and/or ‘impulsive’ than the other participants. Further, during the interviews, they often expressed concerns for their children and their families, and they had never ceased to write and call them. Such expressions of attachment were less apparent among the comparison men.

Even criminal actions for most of the Mafia members were led by loyalty to their families or adherence to the family’s ‘mission’ rather than personal interest… It is possible that these individuals compartmentalized their lives and behaviors –on the one side, the Mafia affairs, on the other side, their positive feelings and affects towards relatives and friends.

The Mafia members were also less likely than the controls to have a substance abuse problem:

Mafia members are required to appear reliable, maintain power and adhere to the internal representations and principles of their organization, and such skills tend to be impaired by substance use. It may be that substance misusers would be less likely to be selected for Mafia membership (as they would be viewed as liabilities), and if selected by chance, their involvement would be short lived.

Indeed. Who can forget the bit in The Sopranos where Mafia boss Tony organizes an intervention to convince his lieutenant and nephew Chris to go to rehab for his heroin addiction, saying that ‘If you weren’t my nephew, your intervention would have been a bullet in your head’?

However… while this is a very interesting study, it’s hard to know whether these Mafia members are a representative sample of their kind. They were all in prison: it might be that the ones on the outside are a different breed. The authors also noted that they could only interview low-ranking mafiosi, since Italian law forbids any contact with jailed Mafia bosses, even for research.

But a bigger problem, in my view is with the control group. These non-Mafia criminals are not a representative sample of all Italian criminals because most criminals don’t go to jail. Jail is reserved for serious and persistent cases.

The problem is that we don’t know if the threshold for going to jail is the same for Mafia and non-Mafia offenders. It’s quite possible that Italian courts are harsher on Mafia members, jailing them (or sending them to a high security jail) even though their offenses might not otherwise warrant such a sentence. The Mafia’s own code of conduct might land them harsher sentences because it forbids them from making plea bargains etc.

In other words, maybe ‘ordinary’ criminals need to be especially horrible to end up in the same jail as the Mafia – and in the comparison group of this study. In which case, the Mafia might be just as psychopathic as those who commit similar crimes outside of the organization.