Are Some Paper Titles "Clickbait"?

A new article over at The Winnower looks at the phenomenon of Academic clickbait: articles with positively-framed titles, interesting phrasing, and no wordplay get more attention online. Author Gwilym Lockwood of Nijmegen considered all of the papers published in Frontiers in Psychology in 2013 and 2014. Several "clickbait" characteristics (as Lockwood calls them) of the paper titles were assessed by three raters, and the outcome measure was the Altmetric score, which summarizes the volume of social media (e.g. Twitter) interest in each paper. A higher Altmetric score means more 'buzz'. It turns out that the biggest correlate of a higher Altmetric score was "phrasing arousal", which Lockwood defines (it's somewhat subjective) as "using more general and less technical terminology, using interesting or eye-catching turns of phrase, and using the curiosity gap". 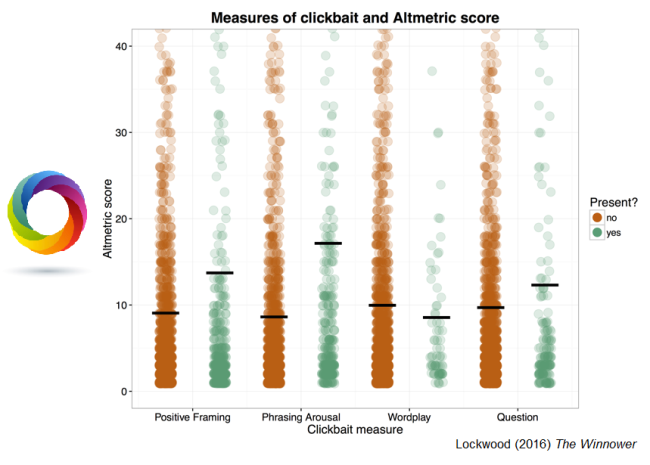 "Positive framing", i.e. a title consisting of a concrete statement of the results, as opposed to a description of the topic of the study or the question asked, was also associated with better Altmetrics. However, "wordplay" i.e. pun titles was not associated with Altmetric success. If anything, amusing titles got less attention. Maybe this is a sign that scientists should stick to science and not comedy. The presence of question marks and the total number of words of the title likewise had little or no impact. This is an interesting set of results, and in my view the null results are more interesting than the positive ones. I was surprised to see that title length had no effect because a short title is one of the main things I look for when I'm scanning paper titles deciding which ones to highlight on my Twitter feed. Ditto for pun titles (a guilty pleasure of mine). Actually, I cover psychology, so my own tweets will have been included in the Altmetric scores that formed the data for this article. Finally, I can't help but note that Lockwood's article title is itself "clickbait" by his definition, containing a positive framing and phrasing arousal (not least the choice to use the word "clickbait"...)