The comparative anatomy of male and female brains is an incredibly popular topic. Fromteachers to cartoonists, everyone's interested in it. One supposed dude-dame dimorphism is the width of the corpus callosum, the white matter bridge that connects the brain's left and right hemispheres. Some studies suggest that women have a larger corpus callosum, relative to overall brain size, than men. This has led to a lot of speculation about how females, with their more 'interconnected' brains, are therefore better at things like multitasking:

The corpus callosum is 30 percent more highly developed in the female brain... allowing information to flow more easily from one side of the brain to the other, which allows a woman to focus on more than one thing at a time.

However, according to Eileen Luders and colleagues, that's all a wash, because: Differences in Brain Volume Account for Apparent Sex Differences in Callosal Anatomy It's been argued that women's relatively larger corpus callosa may reflect the fact that men have larger brains, on average, and that the corpus callosum is relatively smaller in larger brains. In other words, the corpus callosum difference might be a side-effect of the true gender difference (perhaps the only one) - bigger male brains overall. Luders et al confirmed this with a clever technique: they looked in a large online brain database to find some extremely small male brains, and extremely large female ones. This, the two genders were matched on total size. There was no gender difference in the corpus collosa of these equally-sized brains, as measured using 'surface-based mesh-modelling': 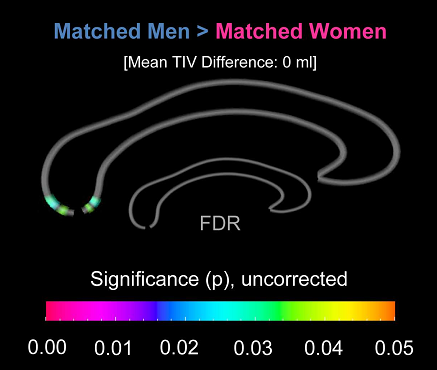 The slight differences that did emerge were in the 'wrong' direction: men had thicker corpus callosum. In fact, this is not so unusual, because quite a lot of previous studies have shown relatively larger corpus callosa in males. The bigger-in-males findings, however, never 'went viral' - perhaps because, unlike the bigger-in-females results, they don't form a ready lightning rod for pre-existing half-conscious ideas about gender. Still, anatomy aside, there are now claims that women's brains are better connected functionally...