Are Humans Wired to Find the Color Red Seductive?

In cultures around the world, red is tied to passion, sex and romance. Does the association come from social learning or our evolutionary heritage? 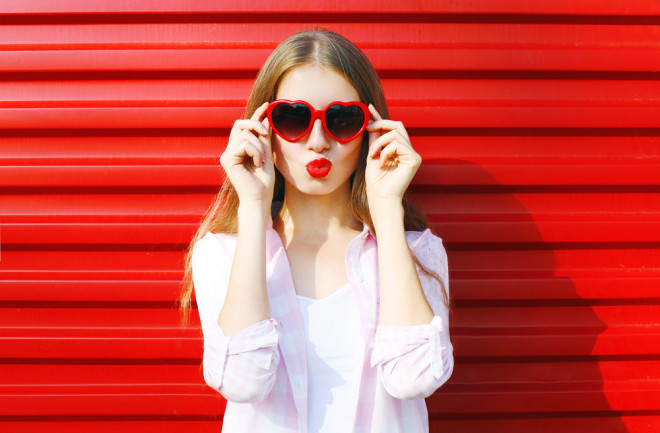 (Credit: How the colour red warps the mind

From roses to lipstick to little Corvettes, many manifestations of red conjure thoughts of love and lust. The color is everywhere this time of year, in the hearts, flowers and other trappings of Valentine’s Day. There's no doubt that red and romance are entwined in our minds; what’s less clear is the reason for their connection.

One explanation is that human societies have paired the two for so long that we are now conditioned to think of them together. Researchers have found support for this in cultural traditions dating back millennia. Some scholars believe red ochre was used in fertility rituals by early Homo sapiens, perhaps painted onto women’s bodies and faces. To this day, bridal red is common in weddings from China to Northern Africa, and it’s mentioned in the Rigveda — an ancient, sacred Hindu text. This suggests the association between red and marriage in India is at least 3,500 years old.

In modern times, red often pops up in the context of illicit sex. In Nathaniel Hawthorne’s The Scarlet Letter (and its 21st-century film reboot, Easy A) the protagonist is forced to wear a scarlet A for adultery after birthing a child out of wedlock. A city’s hub of sexual opportunity is called its red-light district.

Of course, none of that explains how those connections arose in the first place, leading some to wonder whether evolution primed us to be aroused by the sight of red. University of Rochester psychologists Andrew Elliot and Daniela Niesta first proposed this idea, which they dubbed the romantic red hypothesis, in a 2008 study. They admitted the association could be strictly a product of social learning. But, they noted, “there is reason to believe that it may also have roots in our biological heritage.”

They drew an analogy between female humans and female non-human primates, many of which display reddened genitals, chests or faces when nearing ovulation. This blush is caused by elevated estrogen levels that increase blood flow to the skin. The phenomenon may be most conspicuous in baboons, whose nether regions swell tremendously as a signal to attract mates.

Humans don’t advertise their fertility so obviously, but some research suggests that women show more sexual interest during ovulation and they’re more likely to exhibit “the red flush of sexual excitation” on their face, neck and chest, Elliot and Niesta write. So, the thinking goes, maybe men are inclined to interpret redness as a potential come-on.

In their study, Elliot and Niesta asked male undergraduates to rate the attractiveness of women in photographs. Some images featured red in the background or on their shirts. In other images, the woman wore other colors — white, green, or gray. Every variation of the experiment yielded the same result: Women wearing red, or simply appearing against a backdrop of it, were rated as more attractive. The men also reported they'd be more likely to ask out the women clad in red and spend more money on their date. (The aphrodisiac is quite subtle, apparently, considering the men weren’t conscious of red's effect.)

A couple of years later, Elliot and his colleagues reversed the experiment, asking women to rate men. Women also found men wearing red more attractive, and the team concluded that red entices in both directions. Next, Elliot looked for evidence that the link between red and attractiveness is universal among other cultures. He found it in a rural village in Burkina Faso, West Africa, where red typically carries negative connotations. But experiments revealed that the romantic red effect also held true here — the “first evidence suggesting that red may operate as something of a lingua franca in the human mating game," the study noted.

Some studies since then have affirmed these results, though often with caveats. In 2013, two German psychologists found that red enhances men’s attraction to women, but only if they’re young. The next year, another research team reported that the chromatic allure only applies to feminine women. Another of Elliot’s papers found that women are more likely to perceive other women wearing red as sexually receptive and as potential rivals they should "mate guard" against.

More recent work, however, has cast doubt on the link between red and attractiveness altogether. In fact, one 2017 study points to a possible red-unattraction effect. Robert Calin-Jageman and Gabrielle Lehmann, psychologists at Dominican University, replicated Elliot’s experiments in 2017. “We went to heroic lengths'' to match the originals, Calin-Jageman says — down to the precise shades of red, even consulting with Elliot. Nevertheless, they found only a weak increase in attraction for men rating women. They found a weak decrease in attractiveness among the women rating men.

In light of this discrepancy, the two researchers joined Elliot in an “adversarial collaboration” to conduct a meta-analysis of research bearing on the “romantic red” hypothesis. The data revealed a minor increase in attraction for both men and women, and the authors ended, as they began, at odds.

Calin-Jageman and Lehmann took the results as evidence that the effect is “small, potentially even nonexistent.” Elliot — who could not be reached for this article — argued in the review that “a meta-analysis is only as strong as the methodological quality of the studies that contribute to it,” and the quality of the studies, in his opinion, “is not strong.” To him, the possibility remains that red is indeed romantic under certain conditions — especially for men viewing women.

But Calin-Jageman thinks “it would be really weird if it only worked for the one shade of red that he picked.” And he notes that in the one attempt so far to replicate the conditions of Elliot’s first studies, the results came out completely different.

Some researchers also stress that red has many associations, romance being just one of them. It often conveys anger and aggression or even sacrifice and warfare. In some parts of West Africa, it’s associated with protection from evil spirits. As Calin-Jageman put it, “I think red is tangled up in a lot of things and I don’t think there’s a clear evolutionary link to sexual arousal.” Elliot’s own color-in-context theory provides the basis for this idea — a red dress and a pool of blood share a hue, but they sure won’t elicit the same reaction.

As for the romantic red hypothesis, Calin-Jageman says, “I don’t believe it a bit.” Whatever the reality, though, he offers a bit of advice that should prove more fruitful than filling your wardrobe with red: “Invest your time and money in something else to make yourself attractive.”