An Outgoing Teenager Shuts Down. Something's Out of Whack

In merely weeks, a 15-year-old boy no longer cracks jokes, dances or even utters a word. What's going on? 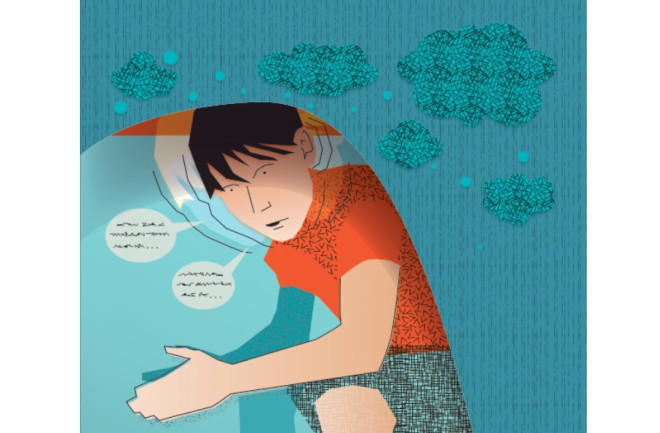 This story appeared in the May 2020 issue as "When a Teenager Shuts Down." Subscribe to Discover magazine for more stories like this.

At first, his parents thought Marcus was just being a typical teenager — reticent to talk, preferring to stay in his room and blare loud music. Then he started talking to himself and refusing to eat. His family became desperate, and brought him to our pediatric emergency department.

“It’s like he isn’t seeing us,” his mother told the nurse tearfully. “It’s like he’s talking to other people who aren’t there.”

Marcus sat quietly nearby, his eyes darting back and forth as he muttered under his breath.

His parents assured us that he was normally an active and spirited 15-year-old, a star of his dance team and church choir, always the first to crack a joke or break out into spontaneous song. Last week, he’d been healthy, other than a headache and a bellyache, relieved by a few doses of Tylenol. But just a few days later, it seemed as if the light had gone out of him.

A physical exam, CT scan of his brain and additional tests were all normal, so he was evaluated by the emergency department psychiatry team.

“I’m pretty sure he’s experiencing psychosis,” the psychiatric social worker told the emergency physician. “He seems to be responding to internal stimuli — voices and hallucinations.”

Sudden new psychosis in a young person can be the beginnings of schizophrenia, severe depression or bipolar disorder. Less often, it springs from a tumor or infection in the brain, drug use, electrolyte imbalances or a malfunctioning thyroid gland. But tests searching for these causes came up with nothing.

The team decided he needed hospitalization for intensive mental health treatment, but, unfortunately, the psychiatric unit was full. Since it was deemed unsafe for him to go home, he was admitted to our pediatric ward until a bed became available in the psychiatric unit.

I was the hospital’s senior pediatric resident on duty that night, so the emergency department (ED) physician called me to go over Marcus’ admission.

“He’s been here about a day or so, but it’s gotten weird,” she told me. “He’s refused all food or drink for the last 12 hours, and he’s not really talking. He’s been calm and cooperative, so we just let him be tonight.”

Hearing this, I scurried downstairs into the evening chaos of the ED. I opened the door to Marcus’ room to say hello, only to find a teenage boy who would not respond. He did not blink. Blank and expressionless, he seemed entirely shut off from the world. Still as a statue, he did not move a muscle. I lifted his hand; it remained outstretched, suspended in mid-air.

I immediately recalled an older gentleman in the state psychiatric ward where I had rotated as a medical student. He always sat in the corner of the drab common room, never speaking or moving.

“Oh, he’s catatonic,” the nurse told me. “Stays nice and still and quiet.”

Catatonia is a strange problem in which people seem withdrawn from the world — not moving or speaking, instead staring blankly and silently, their bodies stiff and posable. First described by doctors in psychiatric sanitariums in the 1800s, catatonic patients exhibit a disabling alteration of motor function and behavior: often mute, but some with occasional repetitive, meaningless speech; staring; withdrawn from their surroundings; immobile yet holding their body in unusual postures. This dysregulation of body and mind is thought to be related to abnormalities in certain chemical messengers in the brain — the neurotransmitters glutamate, GABA and dopamine.

Catatonia can be a complication of psychiatric illnesses, as well as other conditions, such as autoimmune encephalitis, thyroid disorders, epilepsy and effects on the brain from some cancers.

Without treatment, the condition can be fatal, as a patient’s refusal to eat or drink causes deadly dehydration and malnutrition, or their extreme stillness causes the blood to form clots that can travel to block vessels in the brain, heart or lungs.

But with medical care — food and water through tubes into the veins and stomach, and treatments to address the altered neurotransmitters and any underlying causes — catatonia is quite treatable. More than 80 percent of patients return to their prior selves.

It seemed Marcus’ hospitalization was not going to be the straightforward wait for a psychiatric bed as we had initially thought. We had to investigate the cause of his catatonia and treat whatever we found, to bring him out of his statuelike state.

Marcus continued to stay still and silent as we supported his body with food through a tube into his stomach and fluids through an IV in his arm. We ran an exhaustive bevy of tests. Dozens of blood tests returned with nothing amiss. An MRI of his brain and spine showed no obvious problems. Scans of his chest and abdomen showed no hidden tumors. An electroencephalogram of his brain showed no seizures. Samples of his spinal fluid also were normal, with no infection or autoantibodies — the rogue army that the immune system raises when it mistakenly attacks healthy tissues and organs.

We were left presuming his catatonia was due to an underlying mental illness, one that we would have to diagnose by his story and symptoms. Yet he couldn’t speak to tell us what those had been.

In this situation, the treatment can be both therapeutic and diagnostic. Those with catatonia due to illnesses such as depression or PTSD will respond to a class of medicines called benzodiazepines; these normally sedative drugs can paradoxically cause catatonic patients to awaken. Given escalating doses — ones that would normally zonk out someone without the disorder — people with catatonia begin to unfreeze and emerge.

We started Marcus on a benzodiazepine, adjusting it daily. Soon thereafter, I heard a voice coming from his room. Marcus’ parents had played R&B superstar John Legend’s latest album in his room constantly, but only now did we hear Marcus singing along. That day, I walked in to find his parents sitting agape nearby as Marcus crooned along with every word, even subtly tapping his foot to the beat. He was reawakening.

Soon, he spoke in short phrases and moved his arms and legs, though even at maximum doses of his medication, he still could not feed himself or walk. We turned to another treatment — electroconvulsive therapy (ECT), which has been quite effective for patients with catatonia.

“It’s like resetting the circuit breakers in his brain,” he joked.

Few places will treat pediatric patients with ECT, so with the consent of his parents and doctors, Marcus took trips from our hospital to a specialty center across town several times a week for his treatment.

The ECT completed what the benzodiazepines had started — Marcus emerged completely. As he became more able to speak, he described to us a deep depression that had worsened over months. Embarrassed and overwhelmed, he had kept his sad and suicidal thoughts hidden from his family and friends. Once he began to hear voices and withdraw, he was unable to tell his story. Armed with this new knowledge, we found a helpful regimen of medication and intensive psychotherapy for Marcus. He returned to his bright, energetic self, singing and dancing as heartily as before.