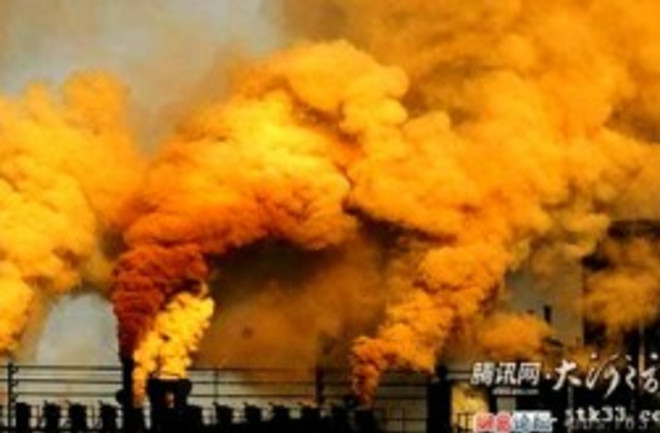 Chinese pollution. Photo by Robert Gagnon via Flickr I'll say it again: You can sympathize with the people who drank the water and abhor the polluters and still not be persuaded that there was a cancer outbreak. That sums up the message of my recent posts on Erin Brockovich and the article I wrote for Slate on the Toms River cancer cluster. It could apply just as easily to the case in Woburn, Massachusetts, which was made famous by Jonathan Harr's book, A Civil Action. Woburn and Toms River are the only two places in the United States where epidemiologists have found an association -- a very murky one -- between pollution and cancer in some of the residents. Both incidents involved childhood leukemia, and the number of excess cases finally attributed to toxic effluents was about half a dozen in each town, occurring over a period of 10 or more years. For no known reason boys were affected in Woburn and girls in Toms River. Both may have been statistical flukes. As far as cancer clusters go, Hinkley, California, the town in Erin Brockovich, is not even considered a contender. I find all of this as surprising as anyone. As I was researching my book, The Cancer Chronicles, I was struck again and again by how many of the perceptions we share about cancer are wrong. To find levels of pollution high enough to cause a noticeable rise in cancer, epidemiologists have had to look to China, where lax environmental standards and the rush to industrialization surpass anything still happening in the developed world. A recent story in the New York Times describes the catastrophe. The Chinese government itself puts the economic toll for just one year at $230 billion. But money is a pale measure. If there is any salvation to come from the harm, it is the emergence of China as a testbed for cancer epidemiology. With large numbers of people exposed for years to high levels of industrial waste, researchers might get a better sense of the link to cancer -- as they did with radiation by studying the sad aftermath of Hiroshima and Nagasaki. Yet even in these extreme situations, the evidence can be frustratingly ambiguous. It was in Liaoning Province that chromium 6 contamination was so high -- 200 times the EPA limit -- that the drinking water turned yellow. According to a commentary in the journal Epidemiology, there has been only one other place in the world with comparable levels: León, Mexico. Both involved people living near factories that produce chromium compounds. In Mexico there weren't enough residents exposed to the water to provide plausible statistics. But in villages near the Chinese plant, researchers found an elevated rate of lung and stomach cancer. The report was published in 1987 in the Chinese Journal of Preventive Medicine (I have not been able to find a copy, in Chinese or English). But 10 years later the numbers were reanalyzed and no increased cancer was found. On the surface the revised conclusion seemed legitimate. The earlier study compared the villages near the factory with the overall population. This time the control group consisted of other nearby villages without chromium-tainted water. That sounds like a more direct and meaningful comparison. But whatever merits the science may have had were obscured when a conflict of interest was discovered: the epidemiologist leading the study, Dennis Paustenbach, had been working at the behest of Pacific Gas and Electric, the Hinkley polluter, through his consulting firm, ChemRisk Inc. There are other twists to the tale, which was laid out in a 2006 account in the International Journal of Occupational and Environmental Health: "Corporate Corruption of Science -- The Case of Chromium (VI)." The Paustenbach paper was later retracted but that left the question hanging: though conducted under suspicious circumstances, was the science itself right or wrong? A third and independent study did find signs of an increase in stomach cancer. But the matter is still unresolved. In the commentary in Epidemiology, Allan H. Smith of the School of Public Health at Berkeley welcomed the new findings. But he noted that they had their own problems, suffering from "serious limitations" caused by poor demographic records.

The study involves a rather messy reanalysis of mortality. . . . [The authors] cannot even reconstruct how the place of residence at the time of death had been determined . . . Only crude rates were available for stomach and lung cancer from any village. Data on stomach cancer were unavailable for one of the villages, and data on lung cancer were unavailable for another. To make matters worse, mortality rates were not available by individual years . . . so any trends over time (perhaps related to latency) could not be examined. . . . There were also no sex-specific data, with mortality for men and women having been combined in the available data. This is surely an epidemiologist’s ultimate nightmare, being unable to adjust properly even for age and sex.

Dr. Smith's criticism of the ChemRisk report elicited a testy response from Dr. Paustenbach, and then a response to the response. As the people of China become unwitting experimental subjects, these kinds of problems are bound to recur. The highest exposures of pollution will come in places where the demographic data are crude or nonexistent. "Indeed, the future of environmental epidemiology lies in the developing world," Dr. Smith wrote, "where studies are usually difficult to do." So we are left with a choice: messy studies in places with high exposures or cleaner studies in places where the levels of contaminant may be too low to have a measureable effect. That was also the problem with the Chinese meta-analysis of the effects of megadoses of fluoride, which I wrote about here in some earlier posts. An article last week in Ars Technica gives a detailed account of what was wrong with Miles O'Brien's PBS Frontline report on chromium: It didn't take into account this crucial matter of dosage. In addition to Hinkley, the newscast focused on a new study by the Environmental Working Group warning that it had found 35 American cities with chromium 6 in the water. But the concentrations were all far below the E.P.A. standard. Maybe the standard needs to be drastically lowered, as it has been in California. But no science was presented that makes that case. Ars Technica's reporter, Scott K. Johnson, asked PBS for a response and got this unsatisfactory reply:

The Newshour’s two-part report on chromium 6 in drinking water supplies examined arguments about levels of safety and about the EPA’s process for making that determination. We included different points of view in our reports: those of affected residents, environmental activists, industry spokespeople, and scientists. The EPA refused to grant an interview, and we did our best to represent the agency’s position. Any specific comment should be viewed in the context of the entire report.

It's a sorry excuse for bad journalism, and Johnson doesn't let the network off the hook:

[T]hat approach — letting everyone have their say, without any critical evaluation — is part of the problem. This is not a question of differing points of view, but one of carefully sifting the knowns and unknowns. Presenting opposing perspectives and leaving the viewer to decide is not the way to communicate science, and it doesn't excuse broadcasting misleading or incomplete information.