It turns out that people involved in ‘Local and Interurban Passenger Transport’ are most likely to be treated for depression. By contrast, those employed in ‘Amusement and Recreational Services’ are less than half as likely to experience it – at least, in Western Pennsylvania, where the research was conducted.

Here’s the paper: Prevalence rates for depression by industry: a claims database analysis, by Cincinnati researchers Lawson Wulsin and colleagues.

The data were anonymized care records from Highmark Ltd. which is “a Blue Cross Blue Shield insurer providing health insurance for the majority of the working population” in Western Pennsylvania (and elsewhere).

Highmark’s data included the occupations and medical claims for 214,413 working adults over the period 2001-2005. Depression was defined as two or more claims using disease-specific cost codes such as ‘major depressive disorder’. Note that the unemployed, disabled, and retired, were not included in this dataset.

There were 55 industries with at least 200 employees. Here’s the rates of depression for the top 10 and bottom 10 job categories (the overall average rate was 10.5%): 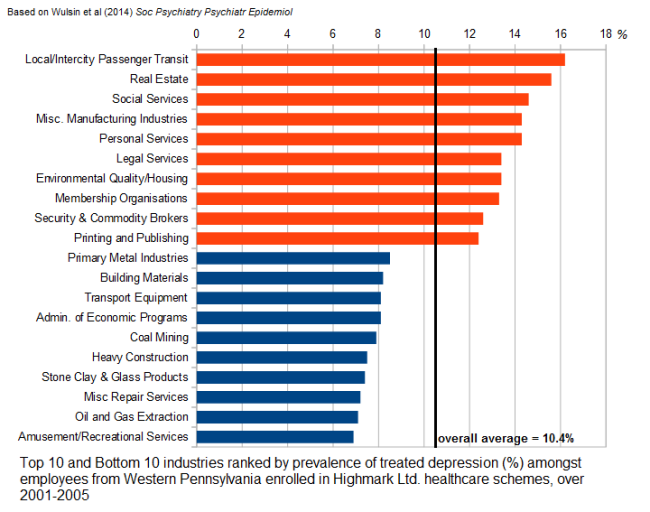 Is there a pattern there?

Although there are a couple of exceptions, a glance reveals more ‘service’ industries amongst the 10 most depression-prone, while the bottom 10 is dominated by ‘manufacturing’ or ‘blue-collar’ jobs. Wulsin et al examined the predictors of depression rates in much more detail and concluded that

Industries with the highest rates tended to be those which, on the national level, require frequent or difficult interactions with the public or clients, and have high levels of stress, and low levels of physical activity.

However, is that true the world over or is it just a Westsylvania thing? It’s interesting to contrast this paper to one I blogged about in 2012. That study showed that, in the UK, blue collar occupations were amongst those with the highest rates of suicide, over the period of 2001-2005. Coal mining occupied the #1 spot in the British suicide rankings but in Western Pennsylvania, remember, coal miners had amongst the lowest rates of treated depression.

It’s true that we can’t directly compare treated depression rates and suicide rates, but this does seem like a dramatic contrast. Presumably the answer lies in the sociologyand history of the two areas; but that raises the question of whether Wulsin et al’s results would generalize to other parts of the USA – or other time periods.