Am I An Unethical Pseudonym?

I've blogged about my fair share of scientific papers over the years, but this is a new one: a paper about me. 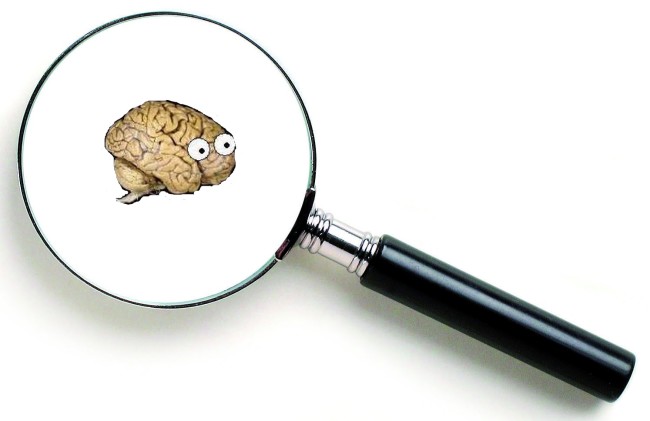 Writing in Science and Engineering Ethics, author Jaime A. Teixeira da Silva discusses the question of Are Pseudonyms Ethical in (Science) Publishing? Neuroskeptic as a Case Study Teixeira da Silva, a plant scientist and frequent poster on PubPeer amongst other forums, opens with the following:

There is a prominent blogger called Neuroskeptic who has a web-site and even a gmail account at which he (or she) can be contacted. Neuroskeptic is not only a critic of papers primarily related to neuroscience and psychiatry, but is also apparently a prominent and frequent commentator at PubPeer and Retraction Watch, two leading watchdogs and controversial (in some circles anti-science) blogs. One expects a fair amount of liberty and freedom of speech within the context of blogs, but when ideas are biased or highly opinionated, then one needs to question the validity and purpose of the use of pseudonyms and pseudonymous identities, such as Neuroskeptic.

No examples of my "biased" ideas are given, but I'll admit to being opiniated at times. However, I don't think this is relevant to my pseudonymity. As I always say in this context, readers can judge for themselves whether what I say makes sense. If I'm right, I'm right and if I'm wrong, I'm wrong. Who I am doesn't matter, or at least it shouldn't matter. Teixeira da Silva continues:

Recent retractions in science have shown that false identities, and even hoaxes and stings that use papers signed by individuals with false identities or affiliations, are not an acceptable or ethical practice in science publishing because they corrode trust and undermine the inherent qualities of honesty that are meant to underlie science publishing (Al-Khatib and Teixeira da Silva 2016).

But 'Neuroskeptic' is not a false identity (even if 'pseudonym' literally means 'false name'). In calling myself 'Neuroskeptic', I'm not trying to fool anyone into believing that this is really my name. 'Neuroskeptic' is transparently a nom de plume. Now, as Teixeira da Silva notes, sometimes in science people do write papers under real-sounding names that turn out to be fake, and this has led to retractions (e.g.), but this has little to do with me. 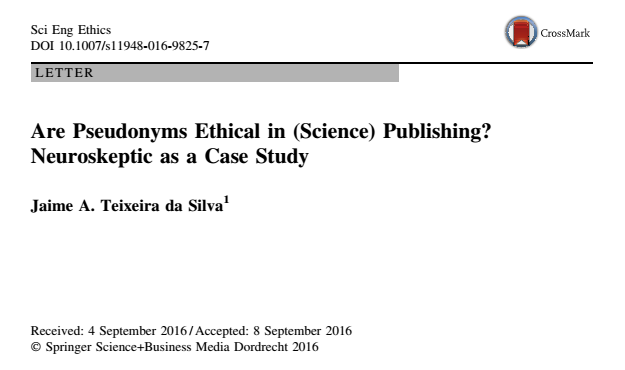 Teixeira da Silva seems to be especially concerned with my two papers which I've published as 'Neuroskeptic'. Of my 2012 "9 Circles of Scientific Hell" paper published in Perspectives on Psychological Science, for instance, he says that as it was "published using a false or fictitious name... Neuroskeptic cannot be held accountable for the views expressed in this paper". Similarly, Teixeira da Silva goes on to say that "there is no affiliation defined for this individual, thus further reducing transparency and accountability." I don't think it's true that I can't be held accountable. I get paid a monthly sum in proportion to the traffic I bring in on my 'Neuroskeptic' blog, and my blog's success depends in part on 'Neuroskeptic's reputation, so if I published something that discredited me, I'd lose out. Also, I'm pretty sure that if I said something that was actually illegal, the authorities would be able to determine my identity pretty easily. But to be fair to Teixeira da Silva I don't think he's complaining that I'm not legally accountable. He is saying that I can't be held accountable as an academic:

Neuroskeptic can work pseudonymously in the blogosphere, but to offer him/her academic protection using a false identity is an ethical affront to all scientists and authors who publish in academic journals knowing that their identities carry with them great weight of responsibility and accountability.

Yet I don't see the problem here. While it's true that most academics only publish under their real names, they could publish anonymously or pseudonymously; I did, and many others have done so before me. Anonymity is not a privilege that I'm jealously guarding for myself; on the contrary I have long arguedin favor of anonymous or pseudonymous discourse as a right for everyone.