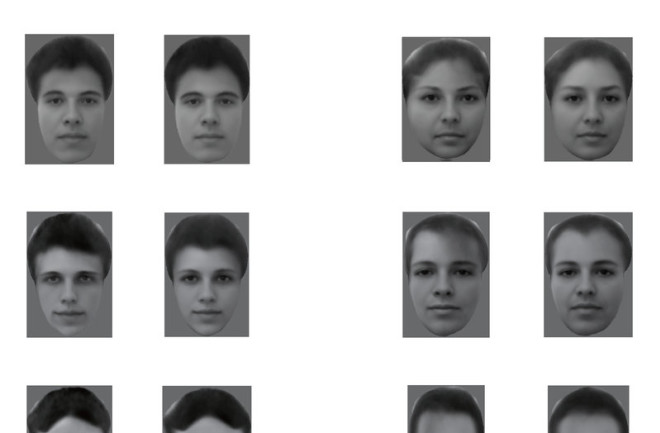 The library of actual and reconstructed faces used in the experiments. The right side of each column was generated solely from neuron activity. (Credit: Doris Tsao/Cell Press) When you see a face, what indicates that it is, indeed, a face? The question has vexed neuroscientists for quite some time, especially because humans seem to be so darn good at recognizing faces — not just in other people, but on sandwiches, in car grills, and even on other planets. The phenomenon even has a name, pareidolia. It is thought that our brain's ability to conjure faces from random objects is due to something called configural processing—a face is more than the sum of its parts. We don't need to put together the various components of a face — eyes, nose, ears — we just recognize one when we see it.

What's In A Face?

New research from the California Institute of Technology presents a challenge, or at least a wrinkle, to this understanding of facial recognition. Working with macaques, the researchers say they identified a small group of neurons that are specialized to pick out individual features of faces and assemble them into a single image. With an fMRI machine, they watched as the monkeys looked at a series of 2,000 different faces and recorded which neurons were active in the so-called "face space" of their brains. They could even pinpoint specific neurons that corresponded to different features. In all, they assembled a library of about 200 neurons that work to piece together facial features. The real test of their work, however, came when they worked backwards, reassembling faces using only information from firing neurons. With data on how the facial feature neurons fired, they rebuilt uncannily accurate versions of the faces. You can see the resemblance in the image above, from the study published Thursday in Cell.. The reconstructed faces look almost exactly like the faces seen. The image is stark proof that primate brains' break faces apart into tiny, digestible pieces as part of the process of recognition.

Not The Whole Story

This is only part of the mystery, of course. Although it begins to explain why we're so good at picking recognizable faces from a crowd, it doesn't fully explain what the brain does with them after that. There's still more to come, as NPR reports. Researchers were working with only two of six brain regions that they had previously identified as responsible for processing faces. In other words, configural processing could still play a role in helping us to recognize faces. So, they may not have upended our conception of facial recognition, but their work does help to solidify the process that allows our brains to pick out and label faces in a sea of visual stimuli. Even more exciting, they say that their insights could one day help restore visual perception, of a kind, to the blind. By stimulating the neurons that respond to facial features, we could one day perhaps begin communicating visual information to those whose eyes cannot provide it.