Alcohol Makes You Think Everyone Is Out to Get You 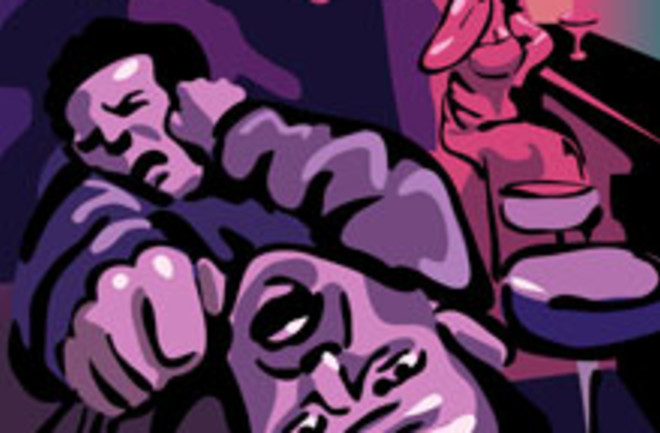 Drunk fights are a typical occurrence at some bars--but why does drinking make us more likely to fight? Kate Shaw over at Ars Technica gives us a good example of a typical confrontation:

If you’ve ever had one (or ten) too many drinks at a bar, you’re probably familiar with this scenario: a drunk guy stumbles past you, spills a beer all over you, and you get angry. You’re convinced he did it on purpose, and you start fuming.

from Personality and Social Psychology Bulletin found that this "thinking he did it on purpose" is because alcohol makes you likely to interpret someone's actions as intentional rather than accidental. In a bar situation, this can translate to a conviction that an offending act was aimed specifically at you--great, so alcohol essentially brings out the paranoid narcissist in all of us. The researchers studied a group of unwitting "taste testers" who were given either juice or juice with alcohol. Half of each group was told that they were imbibing the alcoholic drink, even if they weren't (this enabled the researchers to separate the alcohol's actual effects from the effects of expecting to be drunk). After the "taste test" they were all asked to label a list of actions as deliberate or accidental. Each action fell into one of three categories: deliberate, accidental, and those that could have been interpreted as either (Ars Technica

gives an example of an ambiguous action: “He deleted the email”). When compared to the sober participants, the drinkers (whether they knew they were drinking or not) were more likely to assume that the ambiguous actions were done deliberately. The made man blog

explains the researchers' interpretation of why alcohol changes our intentionality bias:

It takes cognitive effort and control to overcome intentionality bias. Those are skills you lack when you’ve been boozing. Alcohol also is known to decrease reasoning skills and the ability to pick up on social cues. A drunken ass clown lacks the cognitive ability to correctly interpret an unintended slight, the reasoning ability to allow both parties [to] save face and misses the social cues exhibited by everyone around him. Add testosterone, and faces across America are punched every Saturday night.

Discoblog: “Drunk” Parrots Fall From the Trees in Australia

DISCOVER: Can a Drunk Person Fly the Space Shuttle?