About that New Antidepressant Study

The truth is that while the Lancet paper is a nice piece of work, it tells us very little that we didn’t already know, and it has a number of limitations. The media reaction to the paper is frankly bananas, as we’ll see below.

Here’s why the new study doesn’t tell us much new. The authors, Andrea Cipriani et al., conducted a meta-analysis of 522 clinical trials looking at 21 antidepressants in adults. They conclude that “all antidepressants were more effective than placebo”, but the benefits compared to placebo were “mostly modest”. Using the Standardized Mean Difference (SMD) measure of effect size, Cipriani et al. found an effect of 0.30, on a scale where 0.2 is considered ‘small’ and 0.5 ‘medium’.

The thing is, “effective but only modestly” has been the established view on antidepressants for at least 10 years. Just to mention one prior study, the Turner et al. (2008) meta-analysis found the overall effect size of antidepressants to be a modest SMD=0.31 – almost exactly the same as the new estimate.

The very same newspapers are now heralding Cipriani et al. as the savior of antidepressants for finding a smaller effect… 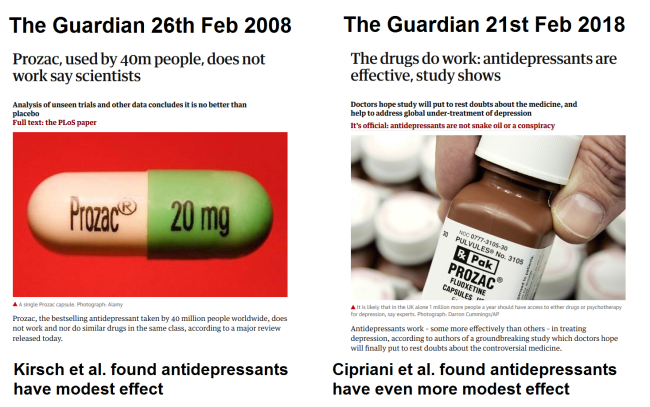 I’m not criticizing Cipriani et al.’s study, which is a huge achievement. It’s the largest antidepressant meta-analysis to date, including an unparalleled number of difficult-to-find unpublished studies (although both Turner et al. and Kirsch et al. did include some.) It includes a broader range of drugs than previous work, although it’s not quite comprehensive: there are no MAOis, for instance, and in general older drugs are under-represented.

Even so, Cipriani et al. meta-analyzed the evidence on all of the most commonly prescribed drugs, and they were able to produce a comparative ranking of the different medications in terms of effectiveness and side-effects, which is likely to be useful.

It’s important to bear in mind however that the meta-analysis only included ‘acute’ trials of about 8 weeks duration. This is a big limitation because a lot of people take antidepressants for much longer than this (I’ve been on mine for about 10 years, ironically the age of the Kirsch et al. paper). The absence of long-term antidepressant trials isn’t Cipriani et al.’s fault: there just aren’t very many of them out there, unfortunately.

Another caveat is that a meta-analysis is only as good as the data that goes into it, and one concern that hangs over pretty much all antidepressant trials is the issue of unblinding, which I’ve blogged about before. According to some people, all of the benefits of antidepressants might just be a placebo effect, driven by people who feel side-effects and then assume that the drug must be working, making them happier. I don’t subscribe to this view but there is very little good evidence either way.

Overall, there’s no big surprises here. The new paper confirms what we already knew about antidepressants, and the media confirmed what we knew about the media.