A World of Her Own

One of the most iconic works in American art – the painting “Christina’s World” – currently hangs in the Museum of Modern Art in New York City as a prized piece of Americana and one of the museum’s most popular exhibits. In his artwork, Andrew Wyeth, a master of American realism, honors a dear friend, a woman who is today both an icon and a true medical mystery.

Since the first public viewing of this famed painting in 1948, the nature of the disabling disease afflicting the eponymous Christina has been the subject of vigorous debate among art historians and physicians alike. The painting depicts a young woman, thin of frame with emaciated limbs, lying in a sun-dappled field and reaching longingly towards a gray farmhouse on a distant hill. The painting is carefully rendered with finely-wrought strokes detailing individual blades of grass and strands of the subject’s hair, tousled by the wind (1). 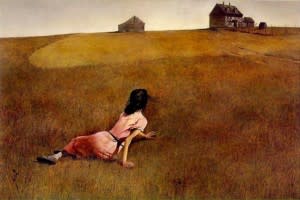 And yet there is something unsettling about the image, a dispiriting mood about it. The woman is alone and helpless, marooned in her “world.” The American writer and critic David McCullough disparaged the painting as “a haunting portrait of a crippled woman and a forsaken house on a bleak New England hill.”

In 1896, at the early age of three, Anna Christina Olson had trouble walking. Her balance was off, she walked with a notably unusual waddle even for a toddler, and her mother crafted knee pads to buffer her tumbles (2)(3). These difficulties of gait and balance would worsen as she aged, a progressive deterioration of function, causing the girl to lose strength first in her legs and then eventually in her arms and hands before she became nearly immobile (4). In 1919, during her mid-20s, she reluctantly agreed to spend one fruitless week in Boston City Hospital as an inpatient. They failed to diagnose her, offering the uninspiring prescription that she “just go on living as [she had] always done”(4).

Christina never used a wheelchair, preferring to crawl around her home, a 16-room farmhouse and its massive grounds in Cushing, Maine. Andrew Wyeth would describe her “crawling like a crab over the New England shore,” using the remaining strength in her shoulders and hips to pitch herself forward (3). She is captured in this precise pose, mid-crawl up a hill, in Wyeth’s painting.

Polio has long been the leading diagnosis for Christina’s illness. In the 1890s, polio epidemics began appearing with terrifying regularity, causing havoc every summer. The virus was a haunting specter, a parental nightmare that infected indiscriminately through fecally-contaminated water. Throughout the first half of the twentieth century, polio was infamously known as the “great crippler of children” and during that period the sight of any physically disabled person was generally attributed to the virus of “infantile paralysis.” In the 1950s, as polio was slowly but surely on the path to eradication within the United States thanks to a wildly effective vaccine, a staggering 1.6 million people had already been infected (5).

For Christina, an armchair diagnosis of childhood infection with polio was a given. Her disease appeared at an age most consistent with polio infection, and the same could be said about her progressive and disabling immobility as her symptoms are consistent with those of post-polio syndrome, in which survivors of the epidemics experience muscle atrophy with weakness and loss of balance a decade after infection. She also lacked a family history of any inheritable disease with a neuromuscular component. For these reasons, and due to the fact that polio was simply one of the most common causes of childhood paralysis at that time, it seems the most logical explanation for her constellation of symptoms.

But the true etiology of Christina’s disease remains a medical enigma, one that continues to be explored in academic medicine. The new leading differential diagnosis has been Charcot-Marie-Tooth disease, a progressive neuromuscular disease in which the muscles slowly waste away, leading to paralysis and sensory numbness in adulthood. But other diagnoses have also been proposed, including cerebral palsy, multiple sclerosis, Friedrich’s ataxia, and many more.

Regardless of the name and true nature of her illness, Wyeth was inspired by Christina’s dignity and resilience, the grace of a life that he described as “limited physically but by no means spiritually.” She was a frequent model for his work, his goal always to “do justice to her extraordinary conquest of a life which most people would consider hopeless”(1). In doing so, Wyeth inadvertently forged a symbol for the community of the physically disabled that, in the 1950s, was beginning to publicly advocate for awareness of their due civil rights (3)(6). Polio survivors were at the vanguard of this burgeoning movement and saw a kindred soul in the figure of Christina, who lives on as an icon to the disabled.

Be sure to visit the MOMA’s page on “Christina’s World” to learn more about this famous piece.

Christina’s farmhouse continues to stand in Cushing, Maine and is designated a national landmark, open to the public for visiting during the summer.

Get a closer look at Christina’s depicted form by checking out this high resolution close-up of Wyeth’s painting.