A Sex Researcher At A Furry Convention

A report in the journal Archives of Sexual Behaviour describes an unusual field trip made by Canadian researcher Debra W. Soh – to a furryconvention, expecting to witness some kind of sexual free-for-all (or free-fur-all). 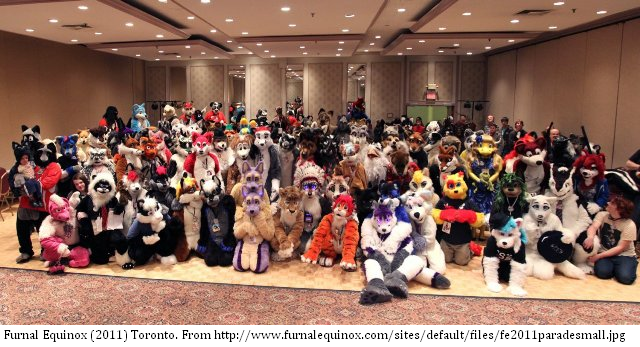 Soh opens by saying that

I couldn’t wait to meet a furry, someone who adopts the identity or persona of an anthropomorphized animal in social – and often sexual – interactions.

Since first discovering their existence two years ago while working as a research assistant in a sexology lab, whenever people ask me what I do, I respond with a question of my own: “Have you ever heard of furries?”

Thus, she went to Furnal Equinox, an annual Toronto furry convention, along with over 900 other attendees.

I hoped to learn as much as I could about ‘‘the fandom’’ and uncover the answers most sexologists are dying to know: Is it a genuine paraphilia [sexual disorder]? Or are the media exaggerating? Is it even about sex at all?

Many of the convention-goers were dressed in the elaborate fursuits that make their community famous, but Soh was in civilian attire; she says that

I had thought about renting a fursuit of my own, but with one day’s notice, and no idea where I could rent such a thing, I decided to brave it in my usual streetwear.

Instead, the furries were chatting, playing board games, smoking, and so on. And showing off their fursuits:

I learned the most popular choices were foxes, wolves, and dogs. More recently, the selection of animals had evolved to include hybrids that did not exist in reality, including those blended with mythical creatures (e.g. a dragon mixed with a wolf)…

There is an important distinction between fursonas and fursuits, as almost all furries have a fursona, but only a small proportion wears a fursuit.

Why do they do it? Soh concluded that

Each member of the community felt they had something that made them different and ill-fitting in mainstream society, such as Asperger’s syndrome or a facial tic.

They found some aspect of childhood, such as cartoon characters or stuffed animals, to be comforting, and this appreciation continued on into their adult lives. The fandom gave them a safe venue in which to express themselves and to feel accepted by others who feel similarly.

She even met a furry neuroscientist. One attendee observed that “there is a large proportion of furries studying the hard sciences.”

Soh concludes that the furry community is about much more than just sex and praises them for being so open and welcoming to a non-furry.

The second author on the paper is James M. Cantor, known for his researchon paedophilia and transsexuality. This is the second paper about furries in the biomedical literature. The first furry PubMed hit was this one from earlier this year, which studied ‘Biological essentialism in a stigmatized fan community’. Google Scholar, which includes a wider range of sources, reveals dozens of hits.