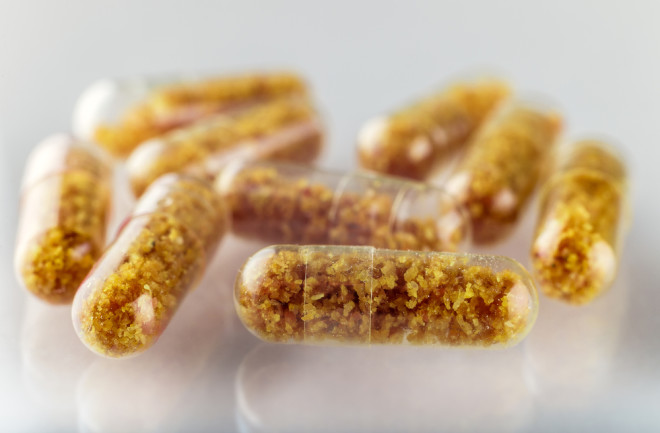 In November 2016, Jane Dudley waited expectantly in her kitchen. As she stood there, she felt a mix of emotions, some nervousness, a bit of disgust, a touch of hope and a great deal of “what have I got to lose?” Her husband, Alexander, walked in and handed her his own fecal matter. She took the feces and popped them into her blender, adding in some saline solution before flicking the switch and watching as the machine whizzed into action.

Fecal microbiota transplantation (FMT) is what it sounds like: A process where feces and its associated bacteria is generally transferred from one person to another. The goal is to take the good bacteria from a healthy donor and use it to repopulate the gut of someone who is considered to have an unhealthy microbiome.

FMT has been around since the fourth century, where China used to treat severe diarrhea and food poisoning. It might sound a little (or a lot) disgusting, but it’s an area of growing research. Researchers are studying FMT as a possible treatment for obesity, irritable bowel syndrome, gut and metabolic disorders and now, mental disorders.

The Link Between Brain and Gut

In Australia, FMT is currently only approved for the treatment of recurrent infection with Clostridium difficile bacteria. And even then, experts must perform the fecal transplant in a clinical setting. However, the treatment results for C. difficile are promising, with a cure rate of around 90 percent. And experts think FMT could also benefit the treatment of illnesses such as Bipolar and Major Depressive Disorder.

Ever had butterflies in the stomach before meeting someone? Or had an upset stomach the morning of a big presentation? That’s the influence of the brain over the gut. And it works the other way too.

While evidence suggests a link between illnesses such as depression to unhealthy gut bacteria, the recent studies are mainly on rodents, studying the gut microbiome and mental health. Research in this area is limited, however, researchers in a study from 2016 transplanted feces from depressed humans into mice and induced depression-like symptoms in the animals. What they found was promising.

“We’re optimistic. But the evidence is very early, for mental health anyway. In humans, the evidence is mainly case studies, which are very informative, but not definitive as a number of other factors could explain the results," says Dr. Jessica Green from the Mood and Food Centre at Deakin University.

Dudley was the focus of one of those case studies – one of only two that have been written in Australia. At the age of 29, she was diagnosed with Bipolar 1 and even when medicated she was regularly hospitalized.

“It took a couple of years to find some medications that stabilized me. They kind of stopped me [from] being suicidal, but that was it. Every day was endless suffering. The only relief I had from the depression was that maybe twice a year, I’d get manic. I was completely disabled by this illness,” says Dudley.

It was Dudley's husband who first suggested that they try a do-it-yourself (DIY) fecal transplant. While initially disgusted by the idea, Jane was desperate, and Alex was incredibly healthy and happy to be a donor. It seemed like a perfect fit and she consulted with her psychiatrist who agreed to monitor her. Looking back, she admits that an at-home approach was a risky one.

“In 2016 we were reckless. We didn’t really understand how dangerous poo transplants can be,” says Dudley.

For safety, Green says, “We absolutely do not condone DIY FMT. People have died from FMT when there hasn’t been adequate screening. The regulations in Australia are extremely stringent, but when they’re followed it’s considered to be an extremely safe procedure.”

And while safety in a clinical setting is not an issue, some need to consider tolerability. Green has just completed recruiting for a feasibility study into the treatment of depression with FMT. At this stage, there are no other published studies looking at FMT for depression, so this study may even be a first, globally.

But how does the feces transfer to the patient? There are a few ways, such as an endoscope, a crapsule (yes, that’s exactly what you think it is) or an enema. And it’s the latter that Green will be testing, to see just how tolerable people with Major Depressive Disorder find the process of undergoing four enemas over four consecutive days. If all goes well, the goal is to conduct a much larger study next year.

If it does turn out that FMT is successful in alleviating symptoms of depression, a safe treatment protocol is still years away. In the meantime, there are other ways people can help their mental health.

“We do have promising evidence which came from a randomized, controlled trial where we asked people to change their diet to increase their consumption of fruits, vegetables, whole grains, legumes, nuts and seeds and decreased consumption of ultra-processed foods,” according to Dr. Tetyana Rocks from the Mood and Food Centre.

The SMILEs Trial, conducted at Deakin University, showed that, “In just twelve weeks, change in diet in such a manner actually improved mental health outcomes.” In fact, the study found that simply increasing intake of these foods and reducing intake of the ultra-processed foods, led to remission from depression in a third of participants.

Nearly six years after embarking on her feces experiment in November 2016, Dudley has retired her blender. After completing ten fecal transplants, she found herself free of depression by March of the following year and, under the supervision of her psychiatrist, medication free by August. Today she is well and living a full life. Of the transformation she says, “I started to like myself for no reason. I started to feel joy for no reason. I went from being completely disabled to being a fully functional adult.”