A problem of knowledge 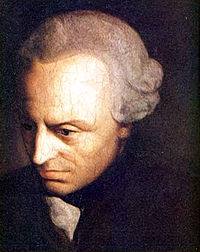 is famous. You've probably heard of him. And you know some of his ideas, such as the categorical imperative

, or have at some point started the Critique of Pure Reason

(if you're like me, you never finish it). But what do you know about his biography? I may not be able to complete a Critique of Pure Reason

, but I did read Manfred Kuehn's Kant: A Biography

in the winter of 2002. From that I learned one surprising fact:

Immanuel Kant in his personal beliefs was not an orthodox Christian, if he had religious sentiment at all.

This surprised me because I had read elsewhere in passing that Kant was a Pietistic Lutheran. Ultimately whether Kant was religious or not was not a major issue for me, but I did update my personal factual database. Fast forward six years to 2008. I was at a party kicking back with some philosophers (as in, people completing their doctorates), and it came up that one of them was doing their dissertation on some of Kant's ideas. This individual happened to be Roman Catholic, and was trying to work in some religious thought. I expressed curiosity, and mentioned offhand how Kant himself was irreligious. My interlocutor expressed surprise and corrected my confusion, explaining that Kant was a devout Lutheran Christian. I shrugged and accepted the correction. I had only read one biography on Kant, and I wasn't going to make a stand on the views of one scholar (especially when as I said I didn't really care). I bring this up because these issues came to the fore in my mind when Matthew Yglesias

issued a correction from an earlier post where he stated that Kant was a Pietistic Lutheran. That correction was prompted by Ian Blecher, a University of Pittsburgh graduate student who is writing a dissertation on Kant. He cites the Kuehn book which I mention above. So is the Kuehn book creditable? Should I trust Blecher, or my passing acquaintance? Analytic philosophy isn't quite like some of the more "post-modern" inflected fields. There is usually a pretense toward the importance of objectivity and the reality of a set of concrete facts. But even here a simple trivial piece of biographical data can be confused and transmitted in error. It's not really a big issue in and of itself, but it's kind of disturbing that simple information like this can't be taken for granted. It should also remind us that in the age of Google and Wikipedia true certain knowledge is still hard, and often more than a link or two away.