A remarkable paper just published in PLoS ONE reports on what is, I think, one of the largest psychological experiments of all time. Researchers Elizabeth L. Paluck and colleagues partnered with a TV network to insert certain themes (or messages) into popular dramas shown on US TV. They then looked to see whether these themes had an effect on real world behavior, ranging from Google searches to drink-driving arrests. The study was based on three prime time Spanish-language dramas (telenovelas) which have a viewership of around 1.2 million people per week. Telenovelas are a genre similar to English-language soap operas except shorter, most lasting about a year. Into these shows, eight messages were added, ranging from health and safety (benefits of low cholesterol, dangers of drink driving) to community building (register to vote, scholarships for Hispanic students.) In total, there were 23 scenes, featuring 16 minutes and 51 seconds of footage. The scenes were "not central to the shows’ plots" but "many involved the shows’ main characters." What makes this a genuine experiment (rather than just an observational study) is that the researchers used randomization to determine when in the season to broadcast each message. So did it work? Not really. The airing of scenes featuring the Hispanic Scholarship Fund did lead to large (but temporary) spikes in the number of people visiting that organization's website. 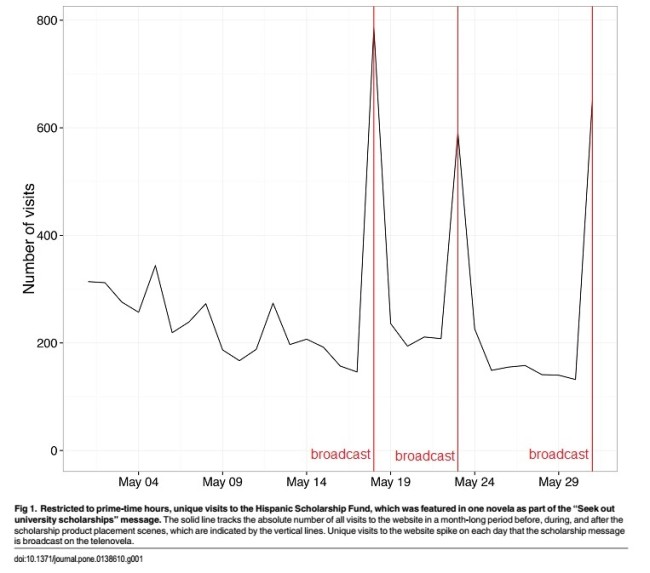 However, there was no evidence that messages about voter registration led to increases in the number of Hispanics actually registering: 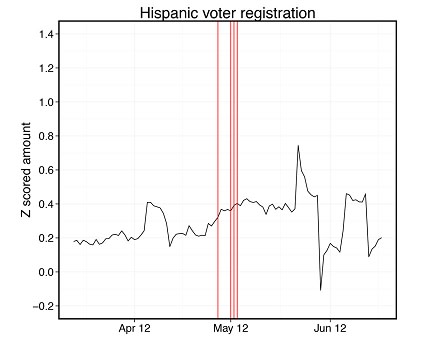 Nor did Google searches for terms related to the messages increase following each broadcast: 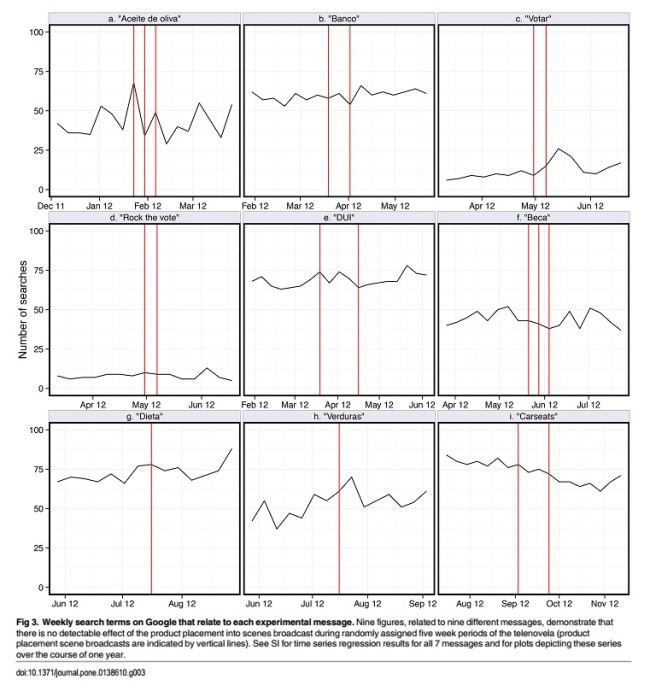 The authors conclude that

In our study, the airtime devoted to the suite of messages would have been worth millions of dollars, but the cumulative effect of these messages on the general population was small and short-lived.

The use of telenovelas to spread health and social messages has a long history. In fact, according to Wikipedia, the genre has "decreased credibility" among viewers today because of heavy-handed government messaging in the past. I wonder if this could be part of the reason for the weak effects? Perhaps this paper will affect the credibility of telenovelas still further? One thing Paluck et al. don't discuss is the ethics of this project. They obtained Institutional Review Board (IRB) approval. However, at least on the face of it, there is an ethical issue here. This was an experimental manipulation of human behavior, but the participants did not give informed consent to be part of the research. Now, when Facebook announced that they had done a randomized study on nearly 700,000 unsuspecting users, people weren't happy. The present study differs from that one in a number of ways but I think some people will be uncomfortable about it. Incidentally, two of the authors on this paper, Donald P. Green and Lynn Vavreck, were in the spotlight recently over their association with alleged science fraud, Michael LaCour. Green co-authored a paper with him, which has since been retracted. Vavreck was LaCour's PhD supervisor.