Why is a major academic publisher printing a journal that seems a lot like the newsletter of the editor's fan club? 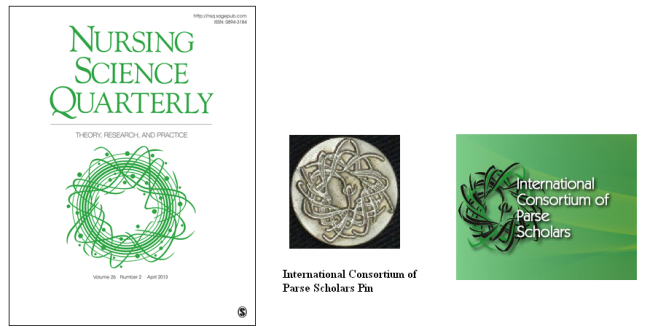 Nursing Science Quarterly (NSQ) is published by SAGE, one of the big publishers in science and the humanities. Even I'm a SAGE contributor, having published in their Perspectives on Psychological Science. But NSQ may be their most interesting of their publications. I came across it when I was searching for research on 'elation' (don't ask) and have been exploring the rabbit hole I found thereby for a while. The NSQ was established 25 years ago under founding editor Rosemarie Rizzo Parse. She's still there. What's unusual is that as well as editing it, Parse seems to be the main topic of the NSQ. Take for instance the term 'humanbecoming', which was coined by Parse in 2007 in reference to her central theory (of which more later). In the 7 years since, there have been 103 PubMed-indexed academic papers mentioning this concept - and a full 98 of those were in the NSQ. That's more than three 'humanbecoming' articles per quarterly issue. Similarly, of the 36 papers dealing with the "Parse research method", 34 appeared in the NSQ. There are quite a few journals whose stance and scope is under the control of a dominant editor. But this is the first case I've come across where a large portion of the papers are explicitly about the Editor's theories. What are they? Well, here's one paper in the latest issue: Feeling Grateful: A Parse Research Method Study.

The humanbecoming school of thought was the theoretical foundation that guided this study. This theory is comprised of three principles that are underpinned by four postulates: illimitability, paradox, freedom, and mystery. Parse defined illimitability as “indivisible unbounded knowing extended to infinity, the all-at-once remembering and prospecting with the moment"...

Taking up the theme of gratitude, the author writes:

Feeling grateful is a freely chosen way to value something of importance with speech, silence, movement, and stillness. It is experienced explicitly-tacitly, reflectively-prereflectively and arises with cherished ideas, projects, and persons while moving on with hopes and dreams. In light of the second principle [of humanbecoming] “configuring rhythmical patterns is the revealing-concealing and enabling-limiting of connecting-separating” (Parse, 2010, p. 258), feeling grateful surfaces with the intimacy of affiliations as pattern preferences are disclosed-not disclosed, potentiating-restricting while attending-distancing with connections.

Following interviews with ten people, the author ascertained that they each had a unique concept of gratitude:

Charles - Feeling grateful is revered elation with the unsureness-sureness of risking with tribulation surfacing with wonder, as quiescent unburdening arises with assuring familial endeavouring. Dale - Feeling grateful is unburdening elation with impelling cherished endowments surfacing with assurance in venturing onward, as quiescent tranquillity amid hardship arises with benevolent alliances.

And it goes on in this heavily-hyphenated vein. Roughly half of the NSQ is composed of Parse-based articles written in this curious style. The other half is more standard academic fare. So far as I can see, Parse's theories are fairly sensible, albeit hardly groundbreaking; her philosophy of nursing underlines the importance of (in a nutshell) nurses listening to patients. This is common sense, albeit the kind of common sense that tends to get forgotten within large organizations, and that bears repeating clearly. Given which I'm not sure why Parse chooses to use such obtuse language. NSQ is not the only journal devoted to Parse. There also is (or was) an "Illuminations: Newsletter of the International Consortium of Parse Scholars (ICPS)"; from the references to articles published there, it seems rather like the NSQ, hence the first line of this post. This brings us on to the ICPS, a fully-fledged scholarly society complete with prizes and a week-long conference which costs $2200 if you attend the whole program, or $550 per module. This year's one is taking place in Pittsburg right now. If any more proof were needed that Nursing Science Quarterly is very much Parse's creature, just take a look at the cover art. The twisted ring logo is very similar to the logo of her eponymous ICPS, and you can even buy a silver pin with the same design. I can't think of many journals with an associated jewellery range. SAGE have a right to publish what they like, but this is a bit weird.