A New Robot for the Bestiary: How to Build a Robotic Ghost Fish 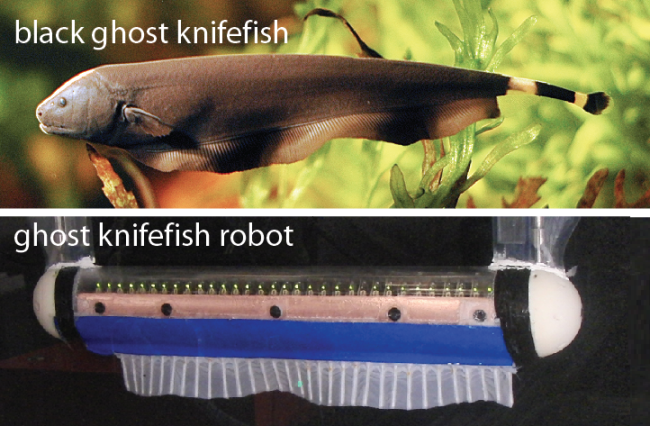 At night in the rivers of the Amazon Basin there buzzes an entire electric civilization of fish that "see" and communicate by discharging weak electric fields. These odd characters, swimming batteries which go by the name of "weakly electric fish," have been the focus of research in my lab and those of many others for quite a while now, because they are a model system for understanding how the brain works. (While their brains are a bit different, we can learn a great deal about ours from them, just as we've learned much of what we know about genetics from fruit flies.) There are now well over 3,000 scientific papers on how the brains of these fish work.

Recently, my collaborators and I built a robotic version of these animals, focusing on one in particular: the black ghost knifefish. (The name is apparently derived from a native South American belief that the souls of ancestors inhabit these fish. For the sake of my karmic health, I'm hoping that this is apocryphal.) My university, Northwestern, did a press release with a video

about our "GhostBot" last week, and I've been astonished at its popularity (nearly 30,000 views as I write this, thanks to coverage by places like io9

). Given this unexpected interest, I thought I'd post a bit of the story behind the ghost. Our first desire for this robot was to provide a kind of telescope. Let me explain. Watching how animals behave so that we can learn how the brain works is challenging. They almost never do the same thing twice and you can't ask them to please repeat what they just did. But, we scientists love repeatability: only through repetition can we assess whether something is statistically significant. Without repetition, we are at a loss. Enter the robots. With a robot, commanded to move in the same ways as our animal, we can get at previously very difficulty issues. For example, with our robot, we can tell it to repeat a strange and unexpected movement we've observed in the fish over and over until we have precisely figured out the underlying mechanical principles of the movement. So using this approach, we were able to convincingly demonstrate the basis of something quite special. As you know, fish usually swim forward, mostly in a horizontal plane. Our fish is very different. Because it hunts in total darkness and can sense in all directions, it doesn't really care which way it swims. It's as agile and responsive swimming backward as it is swimming forward. See below for a sense of how it moves (this high speed video is from my collaboration with George Lauder

at Harvard, who shot it):

The ability to swim in the dark forward and backward with equal agility depends on two special abilities: first, the weak electric field I mentioned provides a kind of underwater sonar (think of these fish as underwater bats). Second, the strange way they swim means they can shift from forward to reverse almost instantly. If you look at the photo or video above, you see a long fin along the body. The fish simply wiggles this fin in one direction or the other to swim forward or reverse -- all while keeping the body straight! (Very handy if you want to build an underwater robot that is practical, since flexing a body is troublesome to implement.) Now we watch this fish move forward and backward all the time and we've published studies on how it works. But when you watch them, it's clear they have more tricks than that up their fins. They are quite acrobatic. It really hit us one day when my then student, Oscar Curet, observed the fish moving vertically without any difficulty. But wait! How can a fin, that usually only moves a body forward or back, move a body vertically? This is the mystery that the robot helped us solve---the fish doesn't do it frequently enough, for a long enough time, for us to really nail it by observation of the animal itself. So the GhostBot was born. It's very advanced, with 32 independently controllable motors in a package the size of your forearm (for comparison, industrial robot arms typically have less than 10 independently controllable motors). Because we needed to pack things so tightly, Kinea

, a company we are affiliated with who built the robot, designed 32 custom "fish steaks"---circuit boards for each of the 32 motors, which stack together through a spine-like bus connector. These printed circuit board steaks are an integral part of the structure of GhostBot. Here's what they look like, with one of the motors and a quarter for scale:

A stack of these fish steaks, along with 32 small Swiss-made motors, goes into a cylindrical water proof hull, and then we attach 32 very fine rods and a lycra fin to the bottom to make the artificial ribbon fin. We currently send control signals via a tether so we can move the fin in exactly the way we tell it, allowing us to recreate the fish fin's motion on command. Finally we get to wash, rinse, and repeat, all while measuring complex mechanical effects in the comfort of our lab. Here's a video of the robot swimming in a flow tunnel (an artificial stream). It doesn't look like it's moving, because we've adjusted the stream speed to match the swimming speed. The rods going up suspend the robot on a frictionless air rail (think of it being suspended from two hovercraft floating on a surface that is out of view), so it is free to move forward, backward, and sideways:

With that done, we can go back and program our robot to do the strange and complex motion we witnessed. The fish sends a wiggle from tail to head, and, at the very same time, a wiggle from head to tail. These two wiggles collide (thankfully, not creating anti-wiggles!) in the middle of the fin. So the propulsion in the horizontal direction is completely canceled out. But the fluid jets that those wiggles had created live on - they collide as well and the result is a spout of fluid going in a downward direction. Like every other animal, this one moves thanks to Newton's third (to every action, there is an equal and opposite reaction)---so the spout of fluid downward pushes the fish upward. We can see that spout by putting a bunch of reflective particles in the water, and shining a very powerful laser sheet at it. Here's what we first saw when we did this, a little over a year ago in George Lauder's lab (note that the robot is being held rigidly, so we can measure how hard it is pushing up):

A beautiful mushroom-cloud like structure, with an inverted jet. The ghost knife has tamed some very complex fluid mechanics to make the fluid do its bidding. For an animal that hunts in the dark, frequently in large tree root masses alone rivers, the maneuverability this buys it is likely to be essential to its survival. The GhostBot, and its future offspring, have a promising future. It has a number of compelling attributes compared to other fish for use in robotics, such as being able to near instantaneously change directions, and swimming while keeping the body rigid, making robotic implementation and deployment more practical. Another key advantage arises due to how smoothly the force the fin generates varies as we change things like amplitude of the wiggle down the fin. This adds to other advantages that the robot shares with other fish-based propulsion systems, such as resistance to getting stuck in weeds and other debris, which conventional propulsive technologies like propellers are prone to. We've also built an artificial version of how the fish's electric sonar works and put that on the robot. We are about to start experiments in which the robot is able to autonomously approach an object, sense it with its electrical field, and then position itself nearby. We are designing a new version of the GhostBot that will have additional capabilities, including fins at the front of the body for pitching and rolling. Having underwater vehicles powered by such bio-inspired technology will enable new capabilities, such as detailed inspection work in cluttered quarters (a sunken ship, or an exploded well head undersea), and situations where only divers can be used because of the need for up close work near delicate structures (coral reef health monitoring, for example.) Our ultimate goal is to simultaneously improve our understanding of how to process sensory information for agile movement and develop two stand-alone technologies: robotic undulators for propulsion of highly maneuverable underwater vehicles, and artificial electrosense for use in all kinds of devices where vision may not work. Stay tuned! For all the details, you can check out the study

, published by the Journal of the Royal Society Interface.