For many, hoarding is a deep, dark secret. But researchers are still unraveling the disorder’s mysteries — and coming up with new treatments. 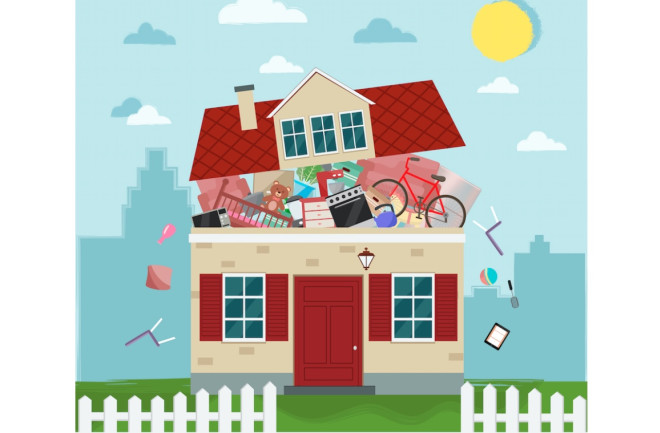 Rachel Kramer Bussel makes a living writing about sex. While she reveals what many people assume to be some of her most private thoughts, Bussel buried her darkest secret between the walls of her New York apartment.

A secret that kept all but two people out of the apartment for years. When her then-boyfriend flew in from Los Angeles, Bussel made him rent a hotel room nearby.

Later, she commuted nearly two hours to her current boyfriend’s home for the first year of their relationship. They moved into a new house together after that first year without him ever visiting her place. Although he never stepped foot inside her apartment, he knew what she had been hiding.

Bussel is a hoarder.

The American Psychiatric Association first recognized hoarding as a psychiatric disorder in 2012. Hoarders excessively save items and have a difficult time parting with their possessions. According to the Mayo Clinic, a type of talk therapy called cognitive behavioral therapy is the most common treatment for the disorder. Psychologist C. Alec Pollard, founder and director of the Saint Louis Behavioral Medicine Institute’s Center for OCD and Anxiety-Related Disorders, uses CBT to treat hoarding.

“I get more requests to talk about hoarding in the community than any other disorder,” Pollard says. “Yet we have the fewest hoarders in our clinic compared to the other anxiety and [obsessive-compulsive disorder]-related disorders.”

Although CBT is the traditional treatment, a 2019 pilot study evaluated a follow-up treatment called compassion-focused therapy. The study concentrated on CFT because of its ability to help regulate a patient’s emotions and improve their self-perception.

While CBT aims to alter how an individual reacts emotionally and physically to situations through real-life training and exercises, CFT works from the inside out. The therapeutic technique helps patients recognize their behavioral and thought patterns and teaches them how to self-soothe.

The researchers found that using CFT as a follow-up treatment to CBT reduced patients’ hoarding symptoms. More than 70 percent of people using this method lowered their symptoms under the standard level for a clinically significant hoarding disorder. Of the patients who used an additional CBT treatment, only 23 percent had scores drop lower than the cut-off.

But Bussel never sought therapy. When her roommate moved out and left the two-bedroom apartment to Bussel, her hoarding tendencies spilled out.

“I didn’t look around and think, ‘Oh, wow, there’s no problem here,’” Bussel says. “I really had no idea, once it got to that point, how to fix it.”

Bussel couldn’t see her floor. The clutter piled up to her shins in every room. Each morning, she waded through her belongings to get out the door and off to work.

Later, as she tried to adjust to living alone, Bussel saved up $150 for a three-hour session with a clutter-organizing service. The woman entered her apartment, looked Bussel in the eyes and told her she couldn’t help her. It was clear that Bussel’s apartment was way past the clutter stage.

At that point, her shame spiraled. Several years passed before Bussel reached back out for help.

The next cleaning service sat down with Bussel and discussed her goals for the purge. Bussel always viewed keeping items as practical. Throwing away anything went against her whole ideology.

“Throwing things away just feels disturbing to me and scary,” Bussel says.

The organizer pushed Bussel to be more liberal in her decisions. After the negotiation, the organizer got to work cleaning out the space. Bussel came home and saw the floor for the first time in years.

Pollard says cleaning a hoarder’s home without permission is often one of the worst things you can do.

“[The families] bring them back expecting them to be happy and they’re furious,” Pollard adds. “The emotion is almost like somebody kidnapping your children.”

Blunted Responses in the Brain

Recent research suggests that hoarders also struggle with monitoring their own behavior. In the part of the brain that controls behavior, an electrical signal called error-related negativity monitors actions associated with impulse control and decision-making. Research has found that, in hoarders, this signal is often blunted. That reduced response makes it difficult for individuals to self-regulate their choices.

A 2020 study found that hoarders display a blunted ERN outside of decision-making, too. Although working with a small sample size, the researchers found that the stunted brain signal occurs in hoarders across all emotional states, not just during times of distress.

The study’s findings adds to prior research that these abnormal brain signals could be related to hoarding symptoms.

For Bussel, however, hoarding feels like an instinct rather than a choice. A few years after the apartment purge, she filled her apartment back up to the brim.

She reached a conclusion. If any cleaning of her apartment over the previous 13 years had resulted in a regression, she needed a new space with her boyfriend to hold herself accountable.

Seven years and four moves later, Bussel’s hoarding has lessened. The couple now live together in separate bedrooms so she can still have a space without shame. While she can now curb her impulses and part with her belongings on a more regular basis, Bussel still considers herself a hoarder. The books stacked next to her on the bed comfort her as she sleeps.

When it’s time for a purge, she will still only have thrown away six objects by the time her boyfriend has filled three boxes. After the decisions are made and compromises finished, her mind is at peace — at least, until the next time.