A Neurosurgeon's High-Stakes Game of Hide-and-Seek

A delicate surgery could stop a woman's crippling pain from trigeminal neuralgia — or threaten her life. 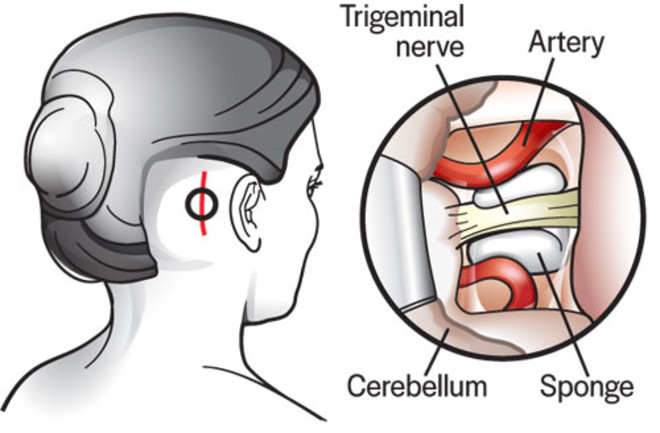 In a surgical treatment for trigeminal neuralgia, a neurosurgeon places a small piece of padding between the blood vessel and the trigeminal nerve to relieve pressure on the nerve. | Roen Kelly / DISCOVER

Neurosurgeons live for the “great saves.” Our specialty is accustomed to more than its share of depressing outcomes, from lives cut short by brain tumors to minds devastated by head injury. Any neurosurgeon relishes the opportunity for a great save — a total cure or a dramatic neurological reversal. The elation of such a moment helps inoculate the surgical psyche against gloomier endings.

So when Christine, a quiet woman in her 50s, walked into my office, I was pleased to recognize — after speaking with her for only five minutes — that I had a chance to relieve her of an agonizing affliction. She would be my next great save.

Christine had a relatively rare disorder called trigeminal neuralgia, and she had a severe case of it. This disorder, also known as tic douloureux (“painful tic” in French), can be so devastatingly painful that some call it “suicide disease.” Christine suffered from excruciating and unpredictable bouts of stabbing, electric-shock-like facial pain that might last seconds or minutes and could be triggered simply by chewing, sipping a cold drink or exposing her face to a winter breeze. The medications she took for the condition were becoming less effective, even at near-toxic doses.

Trigeminal neuralgia occurs when an artery or vein puts pressure on the trigeminal nerve, which carries sensation from the face to the brain. Attacks can be triggered by something as simple as chewing, shaving or talking. | Science Photo Library

Sitting in my exam room, Christine told me the pain was so frequent and severe that it was ruining her life, keeping her constantly on edge because she never knew when it might strike. “I had to quit my job,” she said. “I worry every time I get behind the wheel. I haven’t even been out to lunch with my friends for over a year. I don’t want to make a scene at the restaurant.” Her talking triggered an attack, and she clutched the right side of her face and collapsed forward in her chair for a good 20 seconds, breathing heavily. Drained, she sat back up, and I nodded as sympathetically as I could, never having experienced a similar pain myself.

“I’ll continue with yes-or-no questions,” I explained. “Let me do the talking.”

In most cases, trigeminal neuralgia is caused by pressure on the trigeminal nerve, which supplies sensation to the face, at its entry point into the brain stem. (In patients who have multiple sclerosis, a problem intrinsic to the nerve or brain stem can cause the same kind of pain.) Typically, the pressure is caused by a wayward artery or vein knuckling into the nerve, irritating it with each heartbeat. The condition often can be cured by a specialized neurosurgical operation that permanently separates the blood vessel from the nerve. Patients who are too old or unhealthy for surgery and for whom medications have failed have less invasive options, such as radiosurgery, a form of focused radiation. But these alternatives are less likely to be curative.

I wanted to cure, and Christine was desperate to be cured. She wanted to continue working and fully enjoy her grown children. She also wanted to decrease or even eliminate her need for medication. “I can’t live like this anymore,” she muttered, careful not to open her mouth too widely. She grabbed a pen on my desk, motioning her readiness to sign a consent form. I explained the surgery’s risks: rare, but some quite serious. She asked no questions.

A couple of weeks later, Christine was under general anesthesia, lying on her side in front of me. She was fully draped by blue-gray sheets, with only a small shaved patch of scalp exposed just behind her right ear.

Opportunity for a ‘Great Save’

The surgery began smoothly. I pressed the scalpel through her scalp and down to her skull, drilled a quarter-size hole through her bone, chipped away at the bone edges to perfect the surgical exposure and then delicately sliced opened the dura, the thin covering of the brain, with a more fine-tipped scalpel.

Next, I positioned a large surgical microscope over the hole in Christine’s skull and asked the nurse to dim the lights as the operating room staff focused on the large monitor at the foot of the bed. Slowly and methodically, I manipulated fine dissection tools in this small space to place gentle pressure on the edge of Christine’s cerebellum, the part of her brain at the back of her skull. This allowed for the release of clear cerebrospinal fluid, making room in an otherwise tight tunnel so I could dissect more deeply toward the brain stem and trigeminal nerve. Because this procedure is not all that frequent, some members of the operating room staff were unfamiliar with the anatomy, and I pointed out the anatomical landmarks on the screen while I worked under the microscope.

All went well until about 40 minutes into the operation, just as the trigeminal nerve was just coming into view. Without warning, the deep cavity leading to Christine’s brain stem filled with blood, up to the edge of her skull. Within seconds, the blood pooled over onto the crisp surgical drapes. I quickly suctioned out the blood to assess the situation. The space kept filling back up. The room was silent as everyone stared at the screen, waiting to see my next move.

In a surgical treatment for trigeminal neuralgia, a neurosurgeon places a small piece of padding between the blood vessel and the trigeminal nerve to relieve pressure on the nerve. | Roen Kelly / DISCOVER

All I could hear, other than the incessant hissing sound of Christine’s blood under continuous suction, was a click as the nurse anesthetist picked up a phone, followed by quiet murmuring as she requested immediate backup.

Two images flashed into my mind: my patient’s family waiting for her in the waiting room (a sight I quickly suppressed) and Peter Jannetta peering through a surgical microscope. Jannetta was my mentor in Pittsburgh, where I had completed seven years of neurosurgical training. He is the famous champion of this microvascular decompression procedure, and I learned this operation from him and his direct surgical protégés. I was in the fortunate position of having seen virtually every possible wrinkle in this procedure, from vexing anatomical variations to unexpected bleeding. And I had seen this particular problem — deep, torrential bleeding — a few times before.

I knew what had just happened, even though I couldn’t see it: An aberrant, fat “bridging vein” spanning the distance between the edge of the cerebellum and the inner surface of the skull had snapped open under the tension of the cerebellum falling away as the spinal fluid drained out.

I knew this type of bleeding can be tricky to stop because the volume is high and because the two ends of the vein tend to retract and slip out of view. This all occurs dangerously near the brain stem, a structure that’s vital to a daunting array of brain functions, including the basic life-supporting roles of regulating breathing, heart rate and blood pressure. I needed to fix the problem without causing any new ones. Never far from my mind was the mantra I learned during my neurosurgical training: “Eat while you can, sleep while you can, and don’t mess with the brain stem.”

Although only seconds went by, it felt like minutes. Brisk bleeding tends to slow the clock.

Then Jannetta spoke through me: “Raise the head of the bed. Higher. Higher. Stop.”

This simple maneuver dramatically slowed the bleeding, enough so that I could clear the field of blood, uncover the hidden ends of the vein and seal them off.

Feeling the tension drain from the room, I set to finish the job. I identified the problematic blood vessel — the superior cerebellar artery — pulsating on Christine’s trigeminal nerve. Then I carefully separated the artery from the nerve and inserted tiny, fluffy, cigar-shaped wads of Teflon felt, not much larger than grains of rice, between the two to protect the nerve and end the pain.

I methodically closed everything up in layers, finally affixing a bright-white two-inch bandage to the small patch of shaved scalp behind Christine’s ear. As we moved her to the gurney, her hair draped over and hid the small bandage, as if nothing had happened.

Christine’s trigeminal neuralgia vanished, and she was ecstatic, even chatty. About six weeks later, when I saw her for her second follow-up visit in my office, her trigeminal neuralgia seemed such a distant memory that she barely spoke of it. Instead, she spent most of her visit showing off the new handbag she just bought and found so nifty. “See Dr. Firlik, look here. When I open it up, a light pops on so you can see what you’re rummaging around for way at the bottom of the bag. You know how annoying it is when you really need to find something and you just can’t see?”

Yes, annoying. And more than a little scary.

Neurosurgeon Katrina Firlik is co-founder and chief medical officer of HealthPrize Technologies and author of Another Day in the Frontal Lobe: A Brain Surgeon Exposes Life on the Inside

(2006). Follow her on Twitter at @KatrinaFirlik. The cases described in Vital Signs are real, but names and certain details have been changed.

VIDEO: Watch how the surgery is done. Microvascular decompression procedure for trigeminal neuralgia.