It seems that animals dream, based on similar sleep patterns in humans. But, this dreaming may be different than ours. 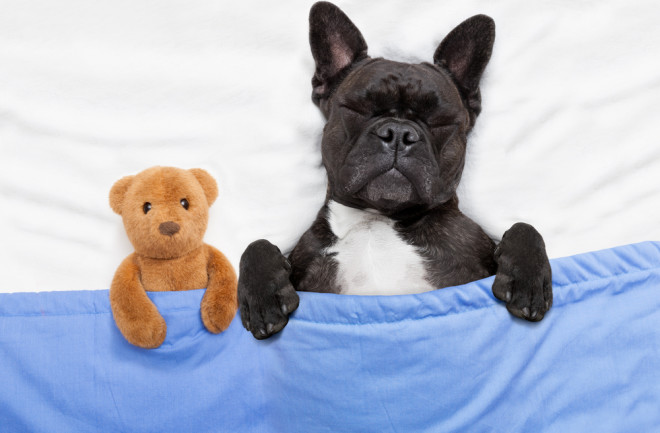 If you’ve ever watched dogs or cats sleep, you’ve probably wondered if they’re dreaming. Was that ear twitch or snuffling sound just a reflex? Or is Fluffy dreaming of the hunt? Maybe the sound of the can opener? Since we can’t ask, we may never know for sure. But there are good reasons to think non-human animals dream, at least according to a certain definition of dreaming.

Marc Bekoff, author of Canine Confidential and an evolutionary biologist at the University of Colorado, Boulder, says he has never really doubted that non-human animals dream. He finds Darwin’s argument for evolutionary continuity compelling. This is the idea that differences in species are a matter of degree and not kind. “Having the necessary neural structures would seem to indicate that [various species of animals] use those structures in the same way,” he says. “But what it means to the rat or the mouse or the dog is another question. I don't know that anybody would have a great answer to that.”

Human dreaming occurs mostly, but not exclusively, in the state known as REM (rapid eye movement) sleep. During this phase, the electrical activity in the brain is more like waking than sleeping. That’s why this state is often called “paradoxical sleep.” Scientists have discovered that most non-human animals — mammals, birds, reptiles, and most recently, fish — experience REM sleep, too. The electrical activity in these creatures’ brains during REM sleep is quite similar to that of humans while they dream. That doesn’t confirm that other animals are dreaming while they are in these sleep states, much less tell us what they’re dreaming about. But there are clues.

During REM sleep, the body loses muscle tone and is effectively paralyzed, a state called atonia. This likely keeps us from acting out our dreams. (People who don’t experience atonia during REM sleep often kick, punch, or leap out of bed during dream states.) In 1995, French neuroscientist Michel Jouvet, a pioneer in the field of sleep research, discovered that when atonia is disabled in cats, the cats stalked and pounced and generally appeared to be acting out dreams.

A 2015 study on rats offered an even more intriguing peek into the minds of sleeping animals. Researchers at University College London monitored the brain activity of rats as they showed the rats the location of food and taught them the route through a maze to get there. They didn’t allow the rats to actually reach the food, though. Later when the rats were sleeping, they monitored the rats’ brain activity. Next, they put the rats back in the maze, without blocking them from the food. While the rats found their way to the food, their brain activity showed the same patterns they had while sleeping, indicating that while snoozing the rats rehearsed the route they had learned earlier.

This is consistent with what sleep is thought to do in humans. Philippe Mourrain is an associate professor of psychiatry and behavioral sciences at Stanford University. His lab studies the evolution and purpose of sleep by looking at the molecular biology of organisms such as fruit flies and zebrafish. Mourrain explains that during sleep the brain stabilizes and integrates what you’ve experienced the day before — a process often called memory consolidation. “One of the main functions of sleep is to reorganize your synaptic connections,” he says.

During this process, you can get some weird associations — stray bits of memory pop up in odd places, creating one of the most memorable features of dreaming: It can feel surreal, like a kaleidoscopic parade of loosely related images. It tends to be a very random process, even if we often impose some kind of narrative or meaning on what we recall once we wake up.

Non-human animals need to consolidate what’s happened to them during their waking hours, too. Studies like the one with the rats suggests they do this in much the same way humans do. So, does this mean that as their brains try to organize new information, these animals have weird dreams about interesting smells, dangerous predators or the alluring sounds of food in the kitchen? That’s very likely. “Sleep is something all animals share,” says Mourrain, “and the part we call dreaming is very likely this reconnection of neural networks during sleep.”

It begs questions about whether animals wake up and remember these images, and maybe even, like humans, attach a storyline to them. They likely do not.

In the end, we may have the question turned around. “I think the message is not, ‘Animals are dreaming like us,’ ” says Mourrain, “but we’re dreaming like them. In our brains, like a lot of other animals that came before us, neuronal networks are being reshuffled at night to prepare us for the day to come.”

Animal species have been sleeping for at least 500 million years, according to Mourrain’s research. Homo Sapiens, on the other hand, have only been around a mere 300,000 years ago — to practice sleep, and, perchance to dream. But that doesn’t mean the dreams of one species are anything like the dreams of another. To paraphrase the philosopher Ludwig Wittgenstein, “If a lion could tell us about his dreams, we would not understand him.” Bekoff put it another way: “I think it depends on how you define ‘dream.’ ”