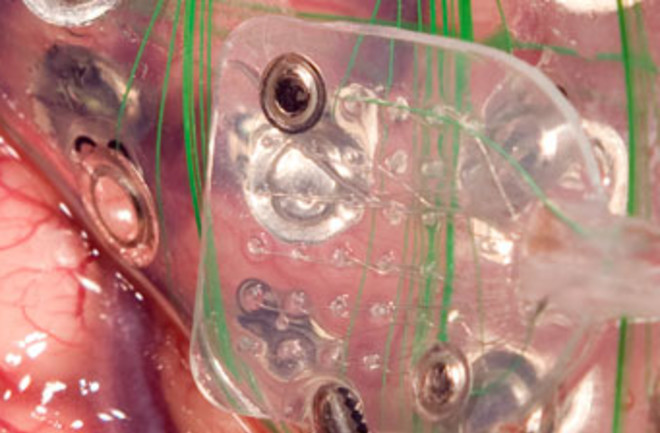 Microelectrodes in a clear silicon array rest on the brain surface. The neural signals they detect might someday control a bionic arm. | Image: University of Utah Department of Neurosurgery

The brain is a castle on a hill. Encased in bone and protected by a special layer of cells, it is shielded from infections and injuries—but also from many pharmaceuticals and even from the body’s own immune defenses. As a result, brain problems are tough to diagnose and to treat.

To meet this challenge, researchers are exploring unconventional therapies, from electrodes to laser-light stimulation to mind-bending drugs. Some of these radical experiments may never pan out. But, as frequently happens in medicine, a few of today’s improbable approaches may evolve into tomorrow’s miraculous cures.

In a sense, cyborgs already walk among us: Nearly 200,000 deaf or near-deaf people have cochlear implants, electronic sound-processing machines that stimulate the auditory nerve and link into the brain. But even by the fanciful science fiction definition, the age of cyborgs is just around the corner. In the last decade, researchers have become increasingly skilled at detecting and interpreting brain signals. Technologies that allow people to use their thoughts to control machines—computers, speaking devices, or prosthetic limbs—are already being tested and could soon be available for widespread applications.

The electrodes in the photo above are part of an experimental brain-computer interface developed by University of Utah neurosurgeon Paul House and neuroengineer Bradley Greger. By placing electrodes on top of the brain, they hope to avoid the problems associated with devices that use implanted probes, which may cause scarring and swelling. Implanted electrodes might also be dangerous if they penetrate sensitive regions of the brain like the speech centers, where damage could lead to speech loss, or the motor cortex, where paralysis is a risk.

The Utah team miniaturized electrocorticography electrodes—sensors developed in the 1960s to locate the seizure-causing areas in the brains of epileptics—and encased them in thin sheets of silicon. House then tested the sheets with two epileptic patients who were undergoing brain surgery for major seizures. (The patients did not need a brain-computer interface but volunteered to help the team fine-tune this technology.) The electrode-embedded sheets were placed over the parts of the brain that control arm and hand movement. When the volunteers reached toward different points on a table, a computer was able to analyze the exact neural signals associated with performing those actions.

House and Greger are still learning how to interpret those signals so that they can be read automatically within a brain-computer interface. The researchers anticipate that someday such interfaces will enable people to operate prosthetic limbs or control an electric wheelchair merely by thinking about what they want to do. But much work remains, Greger cautions. “It won’t be the Matrix. But 10 years down the road, we hope to be utilizing prosthetic devices controlled by brain-computer interfaces that are safer and more comfortable for patients to use.” —Laurie Rich

Someday intractable brain disorders—such as severe Parkinson’s disease, extreme depression, and perhaps even schizophrenia—could be treated with a flashing light implanted in the brain to help correct the firing of disease-related neurons. Even if this technique proves too invasive for routine use, it may inspire new, more precise drugs that affect only the neurons involved in a disease. Good-bye side effects; hello optogenetics.

Identifying specific clusters of faulty neurons is difficult, says Karl Deisseroth, a psychiatrist and bioengineering researcher at Stanford University who has pioneered the optogenetics technique. Moreover, the neural therapies currently available—psychoactive drugs and stimulators that send electric current deep into the brain—are blunt instruments. “They affect all brain cells, not just the ones that are involved in the disorder,” he says.

Optogenetics circumvents these problems by using light to control the activity of specific sets of neurons. The first step in the process involves inserting into those brain cells a gene that makes a light-sensitive protein. One of the genes Deisseroth uses triggers the cell to fire in response to blue light; another responds to yellow light by suppressing activity in the cell. The genes “work like an on/off switch,” Deisseroth says. “Depending on which genes we use, we can activate specific cells or inhibit them.”

In one of his team’s first experiments, a light-sensing gene coded to “turn on” the right side of the motor cortex was put into mice. A fiber-optic probe emitting blue light was inserted into that area of the brain. When it was switched on, all of the mice immediately started walking in circles, responding to the one-sided motor stimulation.

Neuroscientists are now using optogenetics to map brain activity and test the effectiveness of an on/off switch in treating disorders. Using this technique, Deisseroth’s team has already found a cellular pathway that leads from the outer cortex to the cells deep in the brain that control Parkinson’s symptoms, a discovery that could lead to a less invasive treatment for severe cases of the disease. —Jane Bosveld

3. A Trip Out of Depression

Club kids take ketamine because it induces potent and pleasurable dissociative feelings. Anesthesiologists give it to patients because it causes a pain-free state without slowing breathing. Soon it could be put to another use: easing the most paralyzing depressions.

In small doses ketamine is a remarkably effective antidepressant, psychiatrist Dennis Charney and a team at Yale University reported in 2000. In a small study, the compound was particularly helpful for people with treatment-resistant depression—that desperate minority for whom therapy and drugs do not work. Ketamine brought relief almost immediately, and at the low doses Charney used, it caused only mild to moderate dissociation and no major delusions.

Charney, now dean of the Mount Sinai School of Medicine in New York City, thinks ketamine could serve as an alternative to electroconvulsive therapy, the current treatment of last resort. He envisions patients receiving a series of ketamine injections that would keep them depression-free for a month or more. During that window of opportunity, other drugs and therapies would be introduced to ward off relapse, perhaps aided by an occasional ketamine booster.

In a small study published last year, a single ketamine injection dramatically lifted patients’ depression within 24 hours. After multiple doses over two weeks, 9 of 10 patients showed significant improvement. One remained stable for more than three months. “It’s pretty amazing to these patients,” says Rebecca Price, a graduate psychology student at Rutgers University and lead author of the study. “They can’t even remember not being depressed—and then they get this little respite.” Charney says it will take at least several years to conduct enough large, controlled studies for federal drug approval. —Andrew Grant

A good snooze can do wonders for recall, and researchers are now experimenting with intensifying the memory-sharpening effects of sleep by stimulating the brain. At the University of Lübeck in Germany, neuroscientist Jan Born studies the deepest stage of sleep, known as the slow-wave stage because of its characteristic electrical rhythm. Slow-wave sleep plays an important role in memory consolidation, the stage when information gets locked into the brain.

Born gave a group of medical students a list of words to memorize on two separate occasions and attached electrodes to the students’ scalps before they went to bed. On one night he delivered low-frequency, low-voltage electricity while they slept; on another night they received no electricity. The subtle buzz, called transcranial slow-oscillation stimulation, seemed to coax the brain into entering slow-wave sleep, and the subjects recalled more words the morning after they got the gentle zapping than they did without it.

People’s brains produce less slow-wave sleep after age 40, according to György Buzsáki of Rutgers University. Stimulation could help adults achieve more deep sleep and perhaps the memory benefits that come with it. Northwestern University’s Ken Paller is already administering this type of stimulation to middle-aged adults with mild cognitive impairment, often an early indicator of Alzheimer’s disease. The next step: a better understanding of the different stages of slumber. —A. G.

Although low libido may not exactly be a disease, the success of Viagra and its cousins proves that many people are happy to pop a pill to improve their experience in the sack. So far, women have had no such options; drugs like Viagra, which boost blood flow to the genitals, do not help women who have lost interest in sex.

For women, a drug that works between the ears is better than one that functions between the legs, a German pharmaceutical company has found. Boehringer Ingelheim showed that its drug flibanserin was an enhancer of female sexual desire, though an expert FDA panel recently voted against approving the drug, saying that the side effects outweighed its subtle clinical effects. (In North American clinical trials, between 40 and 50 percent of the women who took the drug reported that their tally of monthly “satisfying sexual events” climbed, versus about 30 percent of those who received a placebo. Side effects included dizziness, nausea, and sleepiness.)

Like an antidepressant, flibanserin influences the serotonin system in the brain, enhancing and inhibiting receptors that in turn inhibit other neurotransmitters. In fact, flibanserin is a failed antidepressant: Patients who took it were no less depressed but noticed that their thoughts had turned lightly to love. “It’s not an aphrodisiac; it’s not ‘love potion #9,’” says University of Virginia psychiatrist Anita Clayton, coordinating investigator on one of the Boehringer Ingelheim trials.

While flibanserin may not ever be prescribed for sexual dysfunction—and there is much debate over whether the "dysfunction" it targets is real or just marketing—the drug does show modern neuroscience's broader and deeper effects on our minds. —Amy Barth