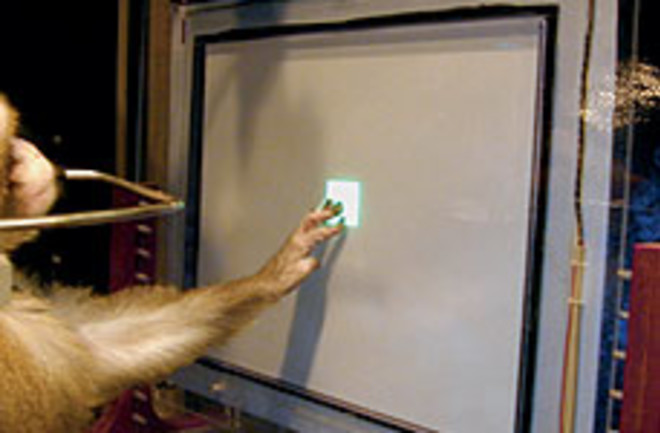 Scans of a monkey’s motor cortex underlie the design of a new hands-free computer interface. | Courtesy of Kelsie Pejsa

Twentysomething Matthew Nagle sits in front of his computer. Skipping over video games, he selects a desktop icon to lower the volume on his TV, then opens a paint program and sketches a wobbly circle on the monitor. Killing time? Nope, making history. Paralyzed from the neck down and confined to a wheelchair, Nagle controls the computer using only his mind.

In October John Donoghue, a neuroscientist at Brown University and cofounder of Cyberkinetics, announced results from the first human trial of his company’s BrainGate system. A tiny sensor implanted in Nagle’s motor cortex reads neural signals associated with arm movement, transmitting them via fiber-optic cable to processors that translate thoughts into actions. One promising outcome is that Nagle has quickly mastered opening and closing a robotic hand. “He’s using the part of his brain that’s been disconnected from the real world,” says Donoghue, who foresees a day when “you’ll shake hands with a person and he’ll say, ‘By the way, I’m a quadriplegic. And I have a physical device in my brain that’s routing the signals past all the damaged parts of my nervous system and back out to the muscles again.’ ”

Donoghue focused his research on messages originating in the motor cortex, the part of the brain that calculates trajectory—the path your hand might take when reaching for a glass of water. In July neuroscientists at Caltech announced they had tapped directly into the mysterious part of the brain involved in planning and motivation—in this case, in three rhesus monkeys. Richard Andersen and his Caltech colleagues trained the monkeys to move a cursor to a target on a video screen without moving their arms and found that the greater the anticipated reward (juice versus water), the stronger the neural signals.

Research into the planning region is important because the area is deeper in the brain and may have escaped damage in many paralysis cases, Andersen says. He is also focusing on using intentions (“I want that glass of water”) rather than specific commands (“Move hand left, open hand, close hand”) to move the cursor.

Both areas of inquiry open the door to a world of brain-driven robotic devices, from motorized wheelchairs to automobiles. Long-term potential includes voice devices activated by patients simply thinking about the words they want to speak, says Andersen. “Recording thoughts from speech areas could eliminate the use of cumbersome letter boards and time-consuming spelling programs.”

Donoghue does not see the fast-moving field as a horse race but rather as a collaborative adventure. Eventually, he says, the motor-versus-planning areas of inquiry will result in a range of complementary treatments. “The community freely exchanges information,” he says. “We’re just going to keep improving. There’s no finish line here.”